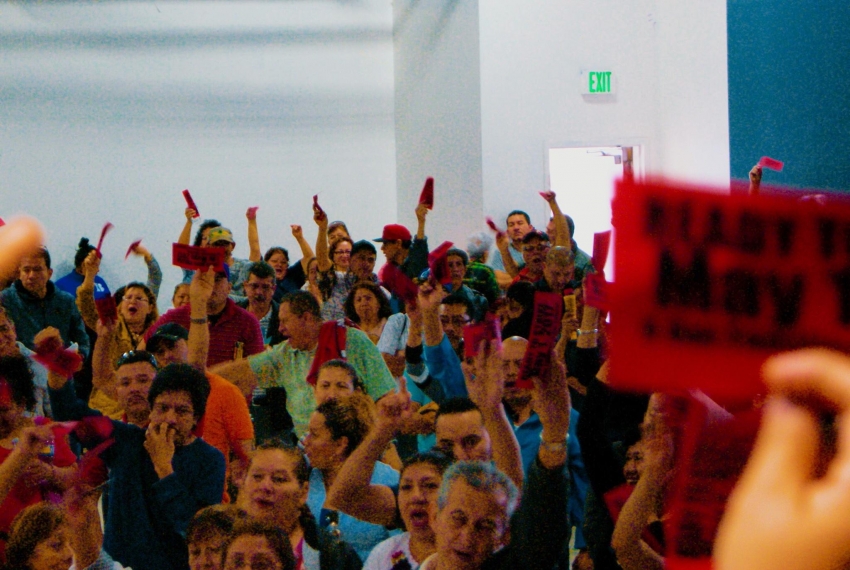 Up and down the West Coast, we are likely to see the largest May Day strikes since hundreds of thousands of immigrant workers walked off the job in 2006. (SEIU United Service Workers West/ Facebook)

Shop steward Tomas Mejia sensed something was different when 600 janitors streamed into the Los Angeles union hall February 16—far more than for a regular membership meeting. Chanting “Huelga! Huelga!” (“Strike! Strike!”), they voted unanimously to strike on May Day.

This won’t be a strike against their employers. The janitors of SEIU United Service Workers West felt driven, Mejia says, “to strike with the community” against the raids, threats, and immigrant-bashing hate speech that the Trump administration has unleashed.

Following the Los Angeles vote, union janitors elsewhere in California have also voted to “strike with the community” on May 1. As the meetings gathered steam, Mejia reports, workers in schools, grocery stores, restaurants, and farms started talking about joining the walkout too.

And the strike is going on the road: SEIU-USWW is partnering with the human rights group Global Exchange, worker centers, the Southern Border Communities Coalition, and faith groups to organize a “Caravan against Fear” that will tour California, Arizona, New Mexico, and Texas in April, staging rallies, cultural events, direct action trainings, and community strike votes leading up to May Day.

In recent years, May Day has seen demonstrations to support immigrant rights. This year’s mobilizations will center on defending immigrants, but weave in other issues as well, such as climate justice and the de-funding of public education.

Up and down the West Coast, we are likely to see the largest May Day strikes since hundreds of thousands of immigrant workers walked off the job in 2006.

A thousand miles to the north of Mejia’s home city, leaders of the unions representing Seattle public school teachers, graduate employees at the University of Washington, and staff at Seattle’s community colleges have called for a strike to protest the Trump administration’s attacks on immigrants, Muslims, workers, women, and members of the LGBT community. The public school teachers and UW graduate employees are scheduling strike votes in the coming weeks.

“We’re horrified about what Trump has done,” said Alex Bacon, a community college administrative assistant and member of AFSCME Local 304. And given the Trump administration’s support for “right-to-work” legislation and slashing health care and retirement programs, he said, “even if we’re not in the crosshairs this second, we’re next.”

A week later, the labor council committed its support for an immigrant-led May Day march, in a resolution urging unions “to consider all forms of action on May 1, 2017, whether striking, walking out, taking sick days, extended lunch hours, exercising rights of conscience, organizing demonstrations or teach-ins, or any other acts of collective expression that builds solidarity across communities.”

Labor Council head Nicole Grant described May Day as just the beginning of a “summer of resistance,” showing that working people can and will respond to Trump’s attacks with disruptive action. “We won’t take down this president in one day,” added Sawant. “But on May Day we are taking our resistance to another level.”

Climate justice activists are also folding into the May Day movement. In Washington state, the Sierra Club and other environmental organizations are calling for an “Earth Day to May Day Action Week,” blending Earth Day April 22 and a “March for Science” into a full week of workshops and protests culminating in a big May 1 mobilization.

Nationally, many union leaders haven’t weighed in on the May Day strike movement, in part because their contracts with employers include no-strike clauses.

Mejia acknowledges the risk of striking, but says, “The government is criminalizing us.” The bigger risk, he says, would be to not fight back, because inaction will only embolden Trump and his billionaire backers.

Key to successful May Day strikes, many activists point out, is connecting local fights to anti-Trump resistance activities. At the University of Washington, for instance, where one-third of the graduate employees are international students, union members are demanding that university administrators bargain with them over the impact of Trump’s Muslim ban and other executive orders. And they are pressing the university to declare itself a “sanctuary campus” and to waive a discriminatory fee it now imposes on international students.

Jonathan Rosenblum is the author of Beyond $15: Immigrant Workers, Faith Activists, and the Revival of the Labor Movement (Beacon Press). A member of UAW Local 1981 (National Writers Union), he also works as a community organizer for the office of Seattle City Councilmember Kshama Sawant.