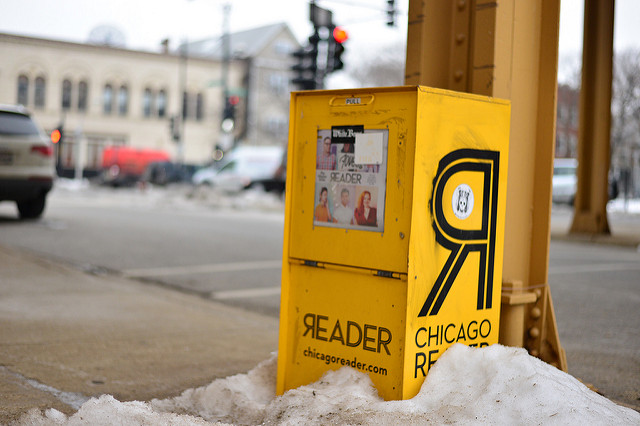 The vote does not trigger a strike but does allow the staff's representatives in collective bargaining to call a walkout at any time. (Bryan Hayes/ Flickr)

The unionized editorial staff of the Chicago Reader, the city’s premier alternative weekly, voted 17-0 Friday to authorize a strike. The vote does not trigger a strike but does allow the staff's representatives in collective bargaining to call a walkout at any time.

The newly formed union completed a proposal for its first contract 16 months ago, according to a statement released by the staff after the vote, but negotiations with Wrapports LLC, the paper’s owner, have failed to reach an agreement.

“Management seems to think it can get rid of its union problem by dragging this out until the entire staff quits to find work that will pay the bills,” said Philip Montoro, the Reader’s music editor and head of the bargaining committee. “Many of us are working second jobs or subletting our apartments to get by because the paper’s hugely wealthy owners seem to think they can retain talented full-time staff with decades of experience by paying them salaries that were substandard 10 years ago.”

Founded in 1971 by a group of college friends with little money or publishing know-how, the Reader grew into a Chicago staple, attracting hundreds of thousands of readers. The early Reader developed a characteristic editorial style by never changing a word of a submitted story unless absolutely necessary and never cutting stories to fit. As a result, reads an article from 1979, “the Reader has attracted some of the most creative young writers in Chicago.”

Ben Joravsky, an award-winning investigative journalist and political columnist, has been there almost since the beginning. He started freelancing for the Reader in the early-1980s and has been on staff since 1990. “Traditionally,” he says, the Reader “had been one of the great alternative newspapers in the country.” And Joravsky says the “family-style atmosphere” of the paper under the original owners made it a great place to work.

For newspapers, years of struggling to adapt to a brave new world born from the Internet’s rise hit a brutal climax in the recession of 2008. Advertising revenues fell 14.9 percent that year and another 26.6 percent the next. Some papers folded. Some put up paywalls to their websites and raised newspaper prices. Many slashed journalism content—and the writers, editors, designers and photographers who produced it. Between 2006 and 2014, newsrooms across the country shrunk by more than 40 percent.

This collapse did not spare the Reader.

In 2007, the local owners sold the Reader to a Florida-based publisher called Creative Loafing. It was a good time to sell a newspaper and a bad time to buy one. Barely a year later, after the wave of the recession broke across the industry, the company filed for bankruptcy. In the settlement, the Reader was acquired by Atalaya Capital Management, a New York hedge fund. And so began what Joravsky calls “a really dark moment in the history of the Reader.” He continues: “there were so many layoffs, and so many good loyal writers and editors were let go. … It’s very dispiriting to see friends lose their jobs and the paper shrink.”

The hedge fund, Joravsky says, was “fattening the goose for the sale.”

In 2009 the daily Chicago Sun-Times also filed for bankruptcy. A new digital-focused media company called Wrapports moved into the desolate market and bought the Sun-Times in 2011 and the Reader the next year. The Reader offices were consolidated into the Sun-Times building. The “About” section of the Wrapports website says that the company “invests in the future of media and believes that interesting content delivered in innovative ways can create tremendous value.” The section is packed with such board-room adjectives, but one word is noticeably missing: journalism. The site lists the Reader under an “Entertainment” heading. “That’s how the Sun-Times uses the Reader,” Joravsky says—as an entertainment supplement.

“Think about this, man!” Joravsky says. “What’s always been an independent, alternative newspaper—locally owned—was now a subsidiary property to a larger corporation.”

According to the statement released by Reader staff after the strike vote, Wrapports has cut the paper’s editorial and noneditorial staff by more than 30 percent and the paper itself has shrunk by more than 40 percent. Wrapports did not respond to requests for comment.

For Joravsky, the decision to unionize was not only about securing decent wages and benefits for the paper’s staff: “I voted for the union because I thought that was the best way to secure the future of the Chicago Reader.”

Craig Rosenbaum, executive director of the Chicago Newspaper Guild, echoes this idea. For years, he says, the Reader has seen “a decline in staff and a decline in content.” A key sticking-point in the negotiations, in addition to wages and benefits, has been jurisdiction—basically, what percentage of the Reader’s content must come from unionized staff and what percentage can come from freelancers. The union is not against freelancers, Rosenbaum insists—in fact, a division of the Guild is devoted to representing freelancers. But, he says, an agreement that ensures a certain percentage of content comes from unionized staff also ensures enough staff to handle the work, quality content and long-term investment in the paper.

“The owners [of newspapers] are civic trustees,” says Rosenbaum. “They need to put money into this because, for our democracy to survive, we need these institutions.”