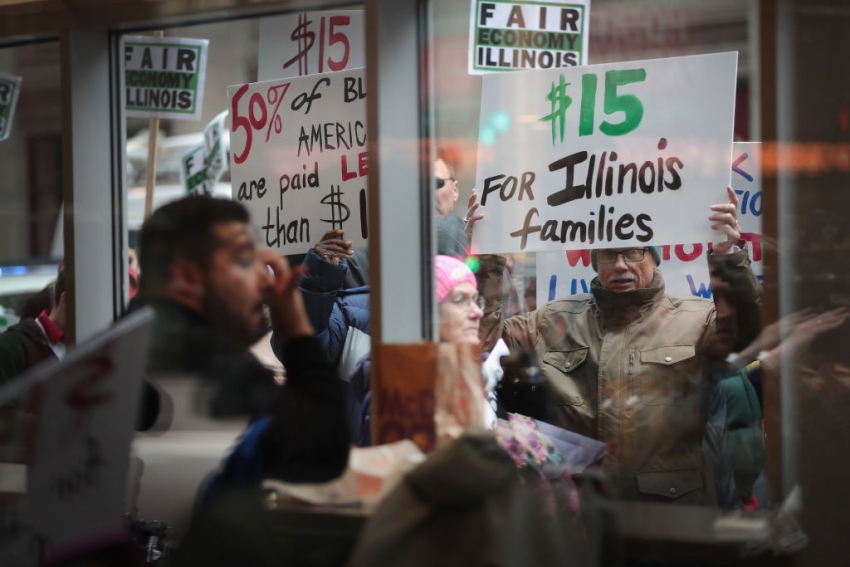 The study found that the most common kinds of retaliation were getting fired, having hours cut, or, in the case of temp workers, being placed on a temp agency’s “Do Not Return” list—a form of blacklisting. Employers also retaliated by threatening to call police or immigration authorities, and sometimes even resorted to physical violence. (Photo by Scott Olson/Getty Images)

Illegal abuses in low-wage workplaces are largely going unreported by workers because of a realistic expectation their bosses will retaliate against them for speaking up, according to a new study released this week.

The report, Challenging the Business of Fear, was prepared by Raise the Floor Alliance, which is a coalition of Chicago worker centers, and the National Economic and Social Rights Initiative (NESRI). Surveys and interviews were conducted with nearly 300 Chicago-area workers from a variety of low-wage industries, including warehousing, manufacturing, food service and retail.

The study finds that among employees who dared to speak up about workplace injustices like unsafe conditions, wage theft, injuries, sexual harassment and discrimination, 58 percent experienced retaliation. Of workers who reported legal violations to regulatory agencies like the Illinois Department of Labor, Department of Human Rights, or the Occupational Safety and Health Administration, over 80 percent said their employer retaliated against them.

Sophia Zaman, executive director of Raise the Floor Alliance, said at a press conference Thursday that retaliation has become “so normalized, it’s basically a way of doing business.”

“Three quarters of our participants reported two or more violations of their legal rights in their current job. This is the definition of a sweatshop,” said Brittany Scott, senior research strategist at NESRI.

Despite having witnessed or experienced multiple workplace abuses, 73 percent of the employees surveyed said they chose to keep quiet at least sometimes due to fear of reprisals.

“Mostly, people don’t bother to fight,” said Victoria, an unemployed factory worker quoted in the report. After telling her employer about injuries she sustained on the job, Victoria was initially given more physically intensive work as retribution. Then, she was fired. “They see people speak up and suffer reprisals and think it’s not worth it.”

The study found that the most common kinds of retaliation were getting fired, having hours cut, or, in the case of temp workers, being placed on a temp agency’s “Do Not Return” list—a form of blacklisting. Employers also retaliated by threatening to call police or immigration authorities, and sometimes even resorted to physical violence, the report notes.

“We’ve seen on the ground that even if a worker leader is well versed on their rights and knows how to report workplace injustice, the threat of retaliation can prevent them from acting,” Zaman said.

According to a recent investigation by the Chicago Reporter, only one in four minimum wage complaints in the city are investigated. This is partly because many workers do not submit the required affidavits necessary for an investigation to be opened, knowing their employers would be given a copy of the affidavit and fearful of the consequences.

Threats of reprisals are particularly paralyzing for undocumented workers or workers with undocumented family members, especially in light of President Donald Trump’s anti-immigrant policies. Across the country, staff with the U.S. Department of Labor report more difficulty enforcing workplace standards since Trump took office because undocumented workers are too fearful to cooperate with them.

“Retaliation is where enforcement breaks down, and addressing it is what we need to do to restore rule of law to our workplaces,” Scott said.

Though employer reprisals are illegal, Scott argued that the complicated patchwork of enforcement frameworks “makes it nearly impossible for workers to get relief from retaliation, and if they do, it’s too little, too late.”

The study found that when workers who had been retaliated against sought legal remedies, 55 percent said their complaints were not taken seriously and 66 percent said they did not receive adequate relief.

Under current laws in most states, including Illinois, the burden of proof is on workers to demonstrate that their employer fired them out of retaliation and not for some other reason, like poor performance or company downsizing.

“It’s too often impossible for workers to prove they were fired out of retaliation, because employers can fire them for virtually reason at all,” Zaman said. “Plausible deniability is all too available to abusive employers.”

Furthermore, the report notes that often the only available legal remedy for retaliation is reinstatement and back pay, which does not cover instances where reprisals took forms other than termination, or where victims cannot or do not wish to return to a particular job they were fired from. The report calls for more universal forms of relief like monetary damages, as well as legal penalties for guilty employers.

A bill recently introduced in the state legislature by the Illinois AFL-CIO could address some of the problems around reprisals. The Wrongful Discharge from Employment Act, supported by Raise the Floor Alliance and NESRI, would force employers to provide fired workers with a clear and legitimate reason for the discharge, essentially proving that it was not done in retaliation.

Raise the Floor Alliance and NESRI also support the creation of a Chicago Office of Labor Standards to ensure more rigorous enforcement of worker protections at the local level.

Ultimately, Zaman and Scott believe that workplace organizing is the best way to confront the climate of fear and enforce legal protections, and stress that worker centers can play a valuable role.

“The culture of fear is on purpose,” Zaman told In These Times. “Employers know they can get away with abuse.”