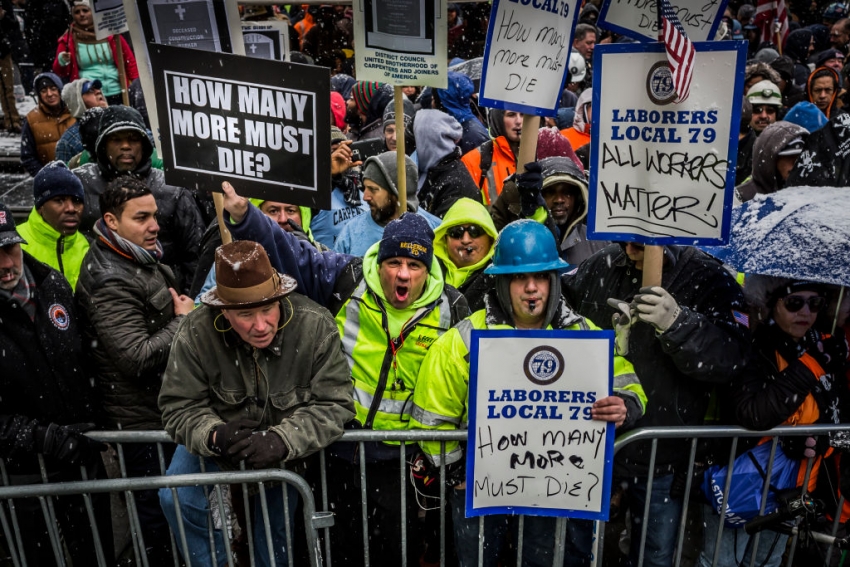 Under previous Democratic and Republican administration, OSHA has used announcements of major enforcement actions, and the threat of bad publicity, to combat health and safety hazards. (Photo by Michael Nigro/Pacific Press/LightRocket via Getty Images)

This article was first posted by FairWarning.

The recent reticence has spurred six U.S. senators, all Democrats, to ask what’s up at OSHA. In a letter to OSHA’s parent agency, the Department of Labor, the six lawmakers are demanding a review of the agency’s “decision to cease public notification of major findings.”

Under previous Democratic and Republican administration, OSHA has used announcements of major enforcement actions, and the threat of bad publicity, to combat health and safety hazards.

“For employers, they serve as a reminder to implement require[d] safeguards, which in turn could save workers’ lives,” stated the letter, signed by Massachusetts’ Elizabeth Warren, Vermont’s Bernie Sanders, Minnesota’s Al Franken, Washington’s Patty Murray, Connecticut’s Christopher Murphy and Pennsylvania’s Robert P. Casey Jr. “For employees, they serve as an impetus to report wrongdoing, thereby protecting themselves and their coworkers.”

The shift in tactics was first reported by FairWarning in early March. At that point, OSHA had failed to announce a single enforcement action since the Jan. 20 inauguration.

In April, OSHA finally broke its silence, announcing penalties of $1.475 million against Atlantic Drain Service of Boston related to last October’s deaths of two workers in a trench collapse.

A break with the past

Yet by then, according to the senators’ letter, OSHA had already assessed more than 100 fines greater than $40,000—the threshold for public disclosure during the Obama Administration. A FairWarning review of records for the last year of the Republican administration of George W. Bush also revealed a steady stream of enforcement news releases.

Another sign of the break with the past is that the OSHA website now includes an advisory on pre-Trump news releases that reads: “Please note: As of January 20, 2017, information in some news releases may be out of date or not reflect current policies.”

The Democratic lawmakers say in their letter that the spotlight on violators during the Obama administration rankled some employers, who viewed it as unfair public shaming. “Lobbyists for trade groups and large employers have opposed these disclosures, claiming that the data will be ‘distorted’ or ‘misconstrued,’” the senators wrote.

But, they added, “public communication regarding these findings is important for OSHA to fulfill its mission."

Labor advocates say highlighting abuses is a crucial tool to deter bad employers because OSHA is so thinly staffed that, according to union researchers, it would take the agency 145 years working at its normal pace to inspect every workplace under its jurisdiction just once.

OSHA officials did not respond to a request for comment on the Senate letter.

"What really scares them is getting mentioned in a press release"

Jordan Barab, the No. 2 OSHA official in the Obama Administration, said that the $40,000 threshold had proven a smart strategy for boosting workplace safety.

“Attorneys have told us that their clients don’t care about low OSHA fines; what really scares them is getting mentioned in a press release,” he said in an email. Such announcements also show workers “that OSHA is on the job and what their rights are.”

Since OSHA’s April 12 announcement about Atlantic Drain—which was indicted, along with its owner, two months earlier on manslaughter charges—the agency has issued three other news releases involving fines to companies in injury cases.

The senators’ letter calls on the Labor Department’s inspector general to review the change in information policy, including possible involvement by the White House and Trump transition team members.

The senators also ask for a review of decisions to delay new safety regulations aimed at reducing workers’ exposure to cancer-causing silica and beryllium.

A beryllium rule, adopted after 15 years of study and delayed twice since the inauguration, took effect May 20, two days after the senators sent their letter, OSHA officials say. However, the compliance deadline for shipbuilders, construction firms and other employers is not until March 2018, and OSHA already is preparing revisions that, critics fear, will dilute the new standards.

Enforcement of tougher restrictions on exposure to crystalline silica, which can cause lung cancer and other respiratory diseases, has also been delayed by two months, to Sept. 23.

The Department of Labor “finalized both rules only after lengthy, thorough, and transparent rulemaking processes,” the senators wrote. “In contrast, the decisions to delay the rules were made precipitously, with no public engagement and no public analysis of the impacts.”

This story was reported by FairWarning (www.fairwarning.org), a nonprofit news organization based in Pasadena, Calif., that focuses on public health, consumer and environmental issues.