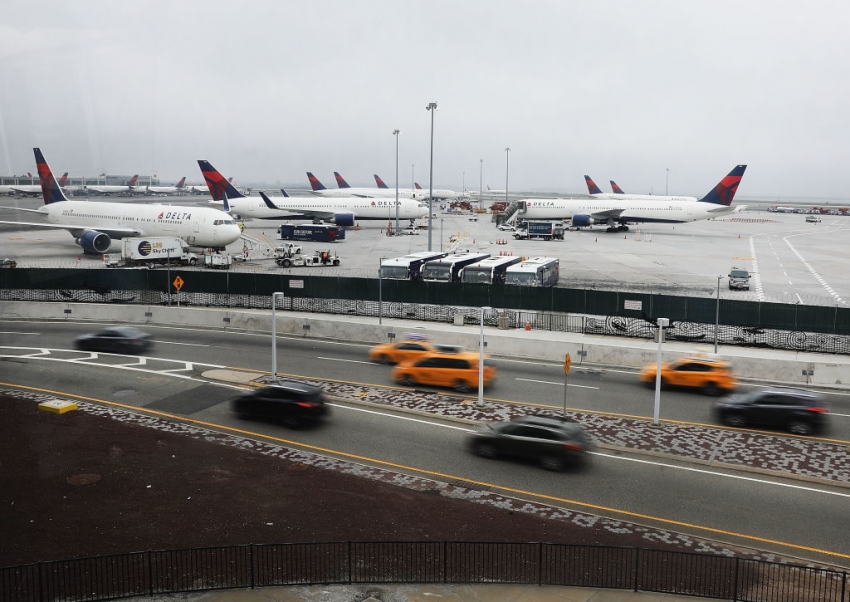 Private sector corporations’ first priority is to turn a profit—not to serve the public. (Photo by Spencer Platt/Getty Images)

The announcement Monday marked the first day of the administration’s “infrastructure week,” a series of publicity events around one of the only areas of the president’s agenda that has intrigued some union leaders and Democratic legislators.

What they had hoped for was an increase in public spending to create good jobs and repair our nation’s transportation systems. What Trump wants is to give public assets away to corporate interests, while reducing pay and benefit standards for workers.

The official justification for privatizing air traffic control is to speed the conversion from a radar-based system to a more accurate GPS one. The Federal Aviation Administration (FAA) has been converting the system, but it does not anticipate finishing the job until 2020. An actual investment in infrastructure could give the FAA the resources it needs to do it faster, but if Republican politicians have any true religion, it is belief in the magic of the “free” market.

The Trump administration’s announcement comes at a time when the public has historically low levels of confidence in our unregulated, private, for-profit air travel industry. An incident in April in which a physician was dragged off of an overbooked United flight aroused public outrage and fairly common agreement that flying in America has become, to borrow from Stephen Colbert, “a trip up the Devil’s butthole in a flying aluminum suppository.”

While always privately operated, the airline industry was once heavily regulated by federal authorities who determined which airports each airline could serve and even how much they could charge customers. The Airline Deregulation Act of 1978 was touted with similar promises of being somehow better and cheaper and offering more options.

Private sector corporations’ first priority is to turn a profit—not to serve the public. The deregulated airlines have been accused of colluding to jack up fares and fees and limit service to unprofitable locations. They routinely overbook flights and bump paying customers off of flights. Seat size and legroom rapidly approach Lilliputian proportions, unless one is willing to pay more for an “upgrade.” Indeed, the unregulated airline industry has so successfully monetized its greedy refusal to ensure basic levels of passenger comfort that if they all instituted a $25 “No Face-Punch Fee” tomorrow, many of us would sigh, shrug and pay it.

And Trump wants to hand these jackals the control over where, when and how quickly planes can move from point A to point B, when their primary motivation will be saving two minutes and $10 with each decision?! No thanks.

Echoes from the past

Trump’s mad plan to wreck the air traffic control system brings to mind the last time a feckless actor threatened everyone’s safety with a wanton disregard for the professional skills and experience of air traffic controllers. It also happened in the first year of his presidency.

In 1981, Ronald Reagan inherited an unsettled contract dispute with the Professional Air Traffic Controllers Organization (PATCO). Finding the Carter administration—the same one that deregulated the airline industry—to be a stubbornly recalcitrant employer, PATCO actually endorsed Reagan in the 1980 election (hey, he was a former union president). Reagan’s administration repaid that favor by dismissing the union’s demands for more reasonable hours and better equipment.

So PATCO went on strike. As federal employees, they had no legal right to strike—a fact that the new president reminded them of with an order to return to work within 48 hours or be fired.

Reagan’s firing of the striking air traffic controllers was a signal event in labor relations. Private sector employers soon followed suit by bargaining their unions to impasse over concessionary demands, forcing them out on strike, permanently replacing the workers and finally decertifying their bargaining units.

Air traffic controllers eventually organized a new union, the National Air Traffic Controllers Association (NATCA), which was certified 30 years ago this month. But the work of air traffic controllers remains incredibly stressful and understaffed. If Trump’s plan is successful there is no guarantee that the new private operator will retain the current workforce. Indeed, there is a good deal of incentive to hire few of the workers, tear up the union contract and lower pay and benefits for new, less experienced workers.

But, if NATCA could rebuild from the PATCO debacle then it seems likely that some union would organize the privatized air traffic controllers. If that happened, the workers would find themselves in an ironic and auspicious position. A privatized workforce would find itself regulated by a set of laws that entertain much more of a formal right to strike. If pushed too far by the privatizers on low wages, low staffing and technology that doesn’t keep up with the times, employees could go on strike—for their own working conditions and, perhaps, for the safety and dignity of air passengers everywhere.