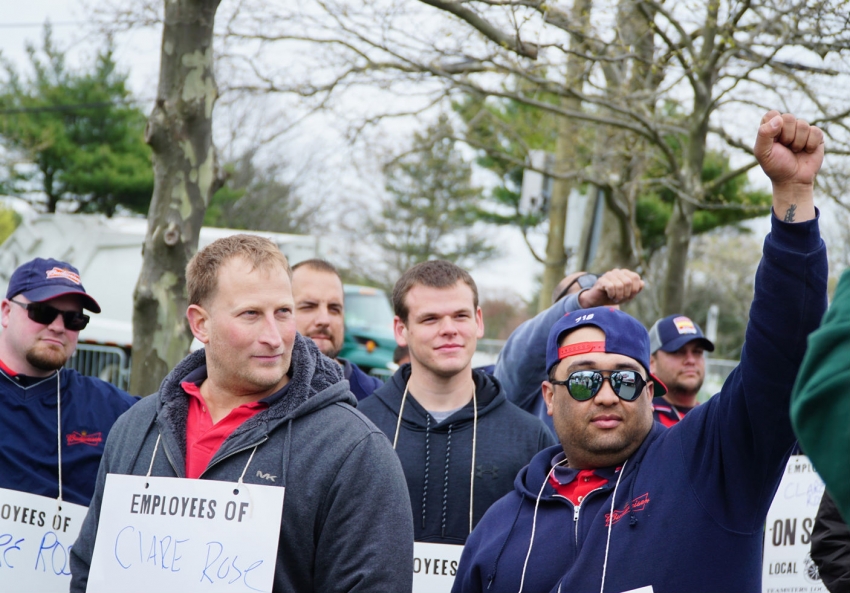 When Louis Chiarelli reflects on his 26 years at Long Island beer distributor Clare Rose, he remembers a family culture, company-wide vacations and the firm’s second-generation owners waiting late into holiday nights for drivers to return from their routes.

But now he finds himself standing across the picket line from his long-time employer. He’s one of more than 100 warehouse workers and drivers who have been on strike since Clare Rose slashed drivers’ wages and ended their pension plan, after allegedly failing to budge significantly in negotiations.

Now entering its ninth week, the strike is a case study in how relations between family-owned businesses and unionized workers can take a turn for the worse after management passes on to a new generation and new industry pressures take hold.

But the conflict also offers a playbook and some hope to squeezed workers: While the strike continues, Clare Rose recently agreed to return to the negotiating table.

Clare Rose claims that the union’s pension plan is severely underfunded, and wage decreases are necessary to shift to a modern distribution system. But Teamsters Local 812, the union representing the striking workers, says the cuts are draconian and accuses the company of trying to zap the union.

Clare Rose is the sole distributor of Anheuser-Busch and Heineken in Long Island. The firm was founded in 1936 by Clare Rose, who at one point was a union member.

Continuing their father’s legacy, Clare Rose’s sons, Ric and Mark, paid generous salaries and benefits to workers, forming close bonds with many employees. When business was good, they would sponsor company-wide trips to the Caribbean.

After the brothers stepped aside, Clare Rose’s grandson, Sean Rose, and his cousin, Lisa, took the reigns in the early 2000s. It was under their leadership that Clare Rose took on more of a corporate feel, according to union members.

Still, the company was hailed as an exemplary employer by Local 812 in a 2013 newsletter.

But storm clouds began to gather when Clare Rose brought on Littler Mendelson, a law firm that touts “extensive experience in strike management,” to help with negotiating a new contract this year, according to Mark Pooler, a driver who says he’s facing upwards of a 25 percent wage cut.

Sean Rose, who began working at Clare Rose at a young age, says maintaining the firm’s family culture has been difficult as the company has grown to over 300 employees.

Clare Rose is profitable, but the cuts were part of a “big-picture decision” to increase efficiency and make the company “stronger and better in the long term for all our employees,” he said in an interview with In These Times last week.

Would his grandfather support the move? “Absolutely, 100 percent,” he said.

When a family business passes into new hands, relationships with unions can suffer because owner-employee connections often don’t run as deep, says Chris Rhomberg, an associate professor of sociology at Fordham University.

Heirs commonly “feel like they want to shore things up, and they’re worried about the long-term competitive pressures on the company,” adds Janice Fine, an associate professor at Rutgers School of Management and Labor Relations.

These dynamics may also have been at work in a labor conflict at another family-owned beer distributor in New Jersey. Like Clare Rose, Shore Point Distributing Company was a third-generation firm accused of abandoning its roots when the firm locked out Teamster workers, primarily for refusing to give up their pension plan.

While the Teamsters proclaimed victory earlier this month, Shore Point was still able to end the union pension plan.

“I think this is going to happen all over the [place]…” Sean Rose said, contending that Shore Point “made sound business decisions.”

Clare Rose was “the last material wholesaler” to operate a system under which drivers both deliver and peddle products, he said. The explosion of craft beers and brands necessitated splitting sales and delivery into separate jobs, according to Rose.

But Local 812 says the reduction to driver wages is not commensurate with the reduction of their responsibilities. And Clare Rose’s proposal to replace the union’s pension plan with a 401(k) would slash Clare Rose’s annual contribution per worker by roughly 90 percent, the union says.

The election of Donald Trump, who is expected to shift the National Labor Relations Board (NLRB) to the right, likely played a role in Clare Rose and Shore Point’s decision to play hardball, argues Joseph McCartin, a labor historian at Georgetown University.

As it turns out, one of Trump’s top picks to fill a vacancy at the NLRB, William Emanuel, is an attorney at Littler Mendelson, the law firm representing Clare Rose. Rose says Trump’s election had “no impact” on his calculus, and added that he didn’t vote for Trump. (He wouldn’t say what candidate he did vote for.)

But Clare Rose certainly hasn’t pulled any punches. It quickly hired permanent replacement workers and notified union members on how to end their union membership.

The union has waged a campaign on multiple fronts, rallying public support, protesting at beer events, filing complaints with the NLRB and securing a review of Clare Rose’s government subsidies.

The strikers have placed a special focus on pressuring Anheuser-Busch to push Clare Rose to the negotiating table.

“The signs and campaigns boycotting our beers are unwarranted,” said Anheuser-Busche spokeswoman Gemma Hart, referring to the strike in a statement.

On June 22, the union postponed a planned rally outside Anheuser-Busch’s Newark, New Jersey brewery, announcing the next day that Clare Rose had agreed to reopen negotiations with participation from a professional mediator.

Local 812 hopes to reach a new contract, but the strike will continue.