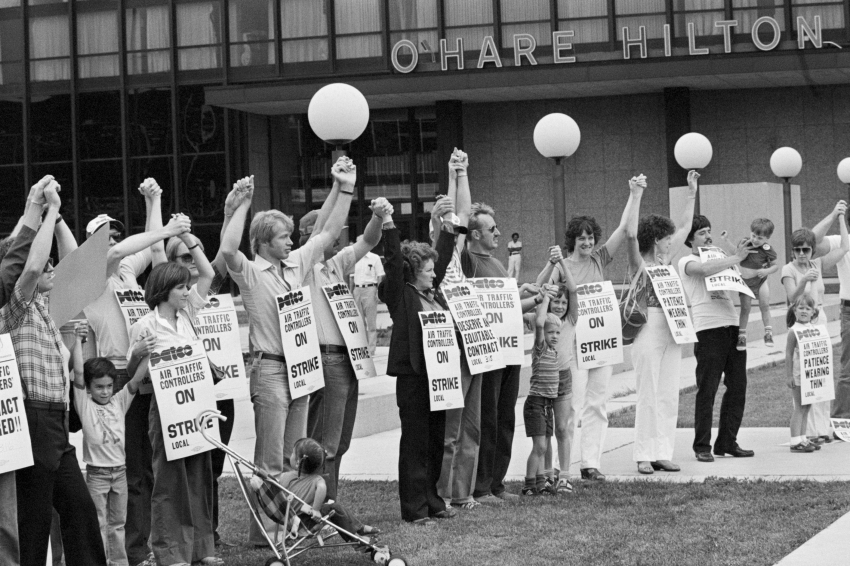 Members of PATCO, the air traffic controllers union, hold hands and raise their arms as their deadline to return to work passes. All strikers were fired on the order of President Reagan on August 5, 1981. (Photo: Getty Images)

Former President Ronald Reagan had a long history of clashing with organized labor, but his most infamous moment came in 1981, when he busted the Professional Air Traffic Controllers Organization (PATCO) and fired more than 11,300 air traffic controllers who were on strike. This act weakened the power of U.S. unions and set the stage for an all-out assault on organizing rights.

Thirty-six years later, Reagan’s lead attorney in the air traffic controllers case is poised to make decisions about thousands of unfair labor practices throughout the country.

As anticipated, President Donald Trump has nominated the management-side labor attorney Peter Robb, of Downs Rachlin Martin in Vermont, to serve as general counsel for the National Labor Relations Board (NLRB). This is a four-year position, and the individual who holds it is responsible for investigating unfair labor practices. Obama administration general counsel Richard Griffin’s term expires this November and, if confirmed, Robb would take over the position.

In 1981, Robb filed unfair labor practice charges against PATCO on behalf of the Federal Labor Relations Authority (FLRA) after a court ruled that the air traffic controllers’ strike was illegal. The FLRA case led to the decertification of PATCO, and Reagan subsequently banned most striking workers from federal service for their rest of their lives.

Reagan’s move set a new precedent for employers, emboldening them to attack labor more openly. In an interview with The Real News Network from 2014, Joseph McCartin, Georgetown history professor and author of Collision Course: Ronald Reagan, the Air Traffic Controllers, and the Strike that Changed America, explained the long-term impact. “When Ronald Reagan replaced the air traffic controllers [in] 1981, it was still not common for American employers in the private sector to deal with strikes by trying to break them and by permanently replacing workers who'd gone out on strike,” said McCartin, “Employers saw that Reagan was able to do this and, in effect, get away with it. Many private-sector employers took a similarly hard line when workers went out on strike in the private sector.”

Robb’s connections to union busting certainly don’t end with the landmark PATCO case. In 2014, he was hired by the Dominion Nuclear power plant when the International Brotherhood of Electrical Workers (IBEW) began organizing workers. The Downs Rachlin Martin website contains a blurb boasting that Robb “represented a major national corporation in a National Labor Relations Board representation case proceeding, which had 34-days of hearing over 3 months to resolve 80 contested classifications covering hundreds of employees.”

In an interview this September, John Fernandes, a business manager for IBEW Local 457, told Bloomberg BNA that Robb represented used “scorched earth” tactics to thwart the organizing efforts. Fernandes says the plant added workers to the proposed unit in order to water down the union vote and sent videos of managers explaining the dangers of unionizing to the homes of employees. Ultimately, the plant was able to add more than 150 workers to the original petition and defeat the organizing drive.

“[Robb] handled most of the direct examinations, and his witnesses were well-schooled in advance—he’d ask one question and they’d go on forever,” Fernandes told Bloomberg BNA. “I was at a disadvantage, not being an attorney, but [the legal fees] would’ve been overwhelming for our local to pay … we certainly viewed it as union busting—it was a very long case.”

Robb also has previous connections to the NLRB. He worked as an NLRB field attorney in Baltimore during the late 1970s. He returned to the agency in 1982 as a staff lawyer and chief counsel for former member Robert Hunter. As a Republican, Hunter was an important ally to then-Chairman Donald Dotson, a staunchly anti-union member. In 1985, Rep. Barney Frank (D-Mass.) told The Washington Post that Hunter had been the, “most loyal supporter of Donald Dotson in the transformation of the NLRB into a fundamentally anti-union entity.”

More recently, Robb’s firm harshly criticized the Obama-era NLRB, as captured in a slideshow compiled by Robb and Downs Rachlin attorney Timothy Copeland Jr. The presentation took aim at some of the pro-labor positions made by the NLRB under the previous administration. “The [Democratic] NLRB majority continues to narrowly define NLRB supervisory status, sometimes defying all common sense,” one slide reads. New Republican members are “likely to agree that the Obama board went too far,” the slideshow explained.

One of the decisions that Robb objects to is a 2014 rule that cuts back the amount of time between the filing of a unionization petition and the union vote to 11 days. The GOP has been attempting to extend the number of days to at least 35. This move would give businesses more time to construct a plan to stomp out union activity, like the aforementioned Dominion Nuclear strategy.

“The NLRB has made it clear that the intent of the new regulations is to run an election as quickly as possible which, of course, will give the employer the shortest period of time to respond to a union election petition,” Robb and three other Downs Rachlin lawyers wrote in a 2015 advisory.

The Trump administration has already quietly laid the groundwork for the NLRB to emerge as a much more business-friendly entity. This reality was underscored in August, when Labor Secretary Alexander Acosta announced that Ronald Reagan would be inducted into the department’s hall of fame. Trump’s previous NLRB nominees all have connections to union-busting, and the expected nomination of Robb would effectively make the NLRB—responsible for enforcing labor law—an anti-labor agency.