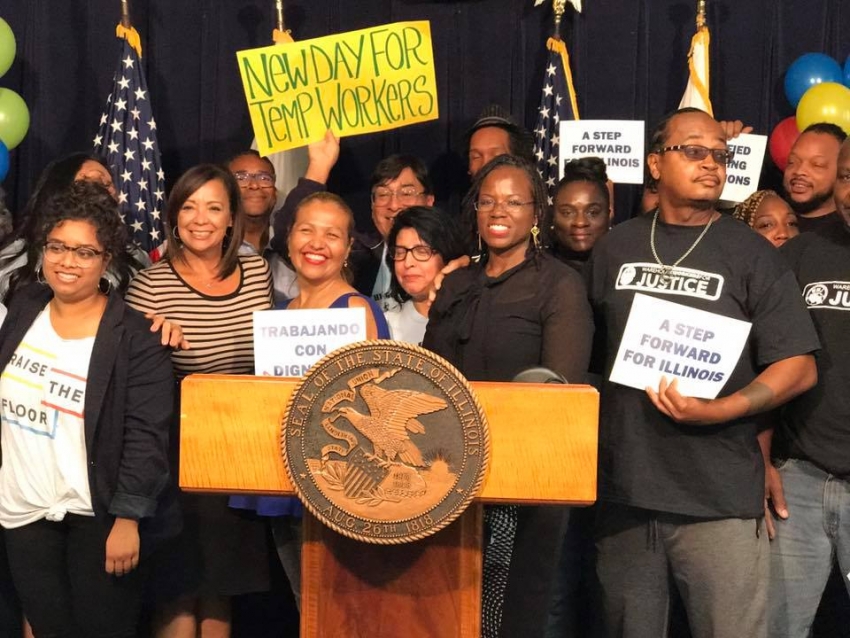 Beginning next summer, a sweeping new law will take effect in Illinois, ending many of the routine injustices suffered by the state’s nearly 850,000 temp employees who often work under miserable conditions.

The Responsible Job Creation Act, or HB690, represents the most ambitious attempt to date by any state to regulate the growing temporary staffing industry. Introduced in January, the bill gained bipartisan support in the Illinois General Assembly and was signed into law by Republican Gov. Bruce Rauner in late September. The law will take effect June 1, 2018.

The legislation, which addresses job insecurity, hiring discrimination and workplace safety, was championed by the Chicago Workers’ Collaborative (CWC) and Warehouse Workers for Justice (WWJ), as well as the Illinois AFL-CIO and Raise the Floor Alliance, a coalition of eight Chicago worker centers.

The law will require staffing agencies to make an effort to place temp workers into permanent positions as they become available—a step forward in the fight to end “perma-temping.” To address racial bias in hiring, the new law requires temporary staffing agencies record and report the race and gender of all job applicants to the Illinois Department of Labor. And in an effort to reduce the workplace injuries that temps frequently suffer, agencies will also now have to notify workers about the kinds of equipment, training and protective clothing required to perform a job.

State Rep. Carol Ammons—a Democrat from Champaign-Urbana who supported Bernie Sanders’ presidential campaign—was the bill’s chief sponsor. Activists credit her with getting the bill to the governor’s desk.

“Legislators don’t always get down into the deep part of the process, but this was so personal to me,” Ammons tells In These Times. After her son told her about the problems he had experienced as a temp worker in another state, she began looking into the temp industry in Illinois and became convinced that it needed reform.

“HB690 won support from both Democrats and Republicans, who heard the voices of workers who came to Springfield to educate us about the temp industry,” state Sen. Iris Martinez, a Democrat who joined Ammons in backing the bill, said at a press conference last Thursday. “When you have two strong women of color leading the charge on this kind of bill, things get done.”

Bakari Whitfield, a WWJ activist, says the most important aspect of HB690 for him is “the opportunity to get a built-in permanent job, as opposed to a seasonal temp job.” Whitfield has been a temp worker for over ten years in a warehouses outside of Joliet. “It’s just a revolving door,” he says. “They hire you and fire you around the same time every year. Every six months you have to go get another job,”

The transparency provisions come in response to a pattern of systemic racial and gender discrimination in the temp industry. In Illinois, whistleblowers have alleged that African-American temp workers are routinely passed over for jobs in favor of Latinos, whom employers consider easier to exploit on the job.

A previous Illinois bill that would have required temp agencies to report the demographics of job applicants, SB47, was killed in 2015 after temp industry lobbyists spread misinformation and fostered divisions between Latino and black lawmakers, as reported by the Center for Investigative Reporting.

According to Ammons, lobbyists similarly tried to sink HB690 this year. A community organizer before entering politics, Ammons says she relied on conversations and personal relationships with fellow lawmakers to counter the industry lobby and advance the bill.

Months before even introducing the bill, “I started talking to legislators about what was happening in the industry and what was happening to the workers,” Ammons explains. “We started really pushing our legislators in a way that maybe they had not experienced from another legislator, asking them to take the moral high ground on the issue. They realized we weren’t going to let it go and decided they had to work with us.”

The Responsible Job Creation Act also requires staffing agencies to bear the costs of background checks, drug tests and credit reports for job applicants—costs workers currently have to incur themselves.

CWC activist Freddy Amador, who worked as a temp for five years at a factory in Waukegan, told In These Times that he’s had to pay up to $95 in such fees for a single job application. “You pay and sometimes you’re not even going to get the job,” he says.

“Working folks should never have to be penalized with these fees just to apply for a job,” Ammons said at Thursday’s press conference. “The temp agencies are a business, so they are to bear the costs associated with doing business, not the workers.”

HB690 also requires staffing agencies to provide workers with transportation back from a job site if they were given a ride. Under the current system, temp workers are frequently left stranded with no way to get home.

Ammons has promised to track how the law is being enforced, including whether temp agencies are actually placing temps into permanent positions, but admits there’s still more work to be done. In particular, Ammons hopes to pass a trailer bill that would end the practice of staffing agencies paying temp workers through credit or debit cards, which carry fees.

“That’s double taxation on the worker. They should be able to get a paper check,” Ammons says.

“We now have to ensure there is enforcement [of HB690], not that we create a law and forget about it,” Martinez insists. She has encouraged the temp worker leaders with CWC and WWJ to hold legislators accountable. “It’s up to you to let us know that the law is being acted out responsibly, and if not, don’t be afraid of coming back to us and making sure that we do the right thing.”

The author has worked as a research consultant with WWJ in the past  on issues related to the temp industry.