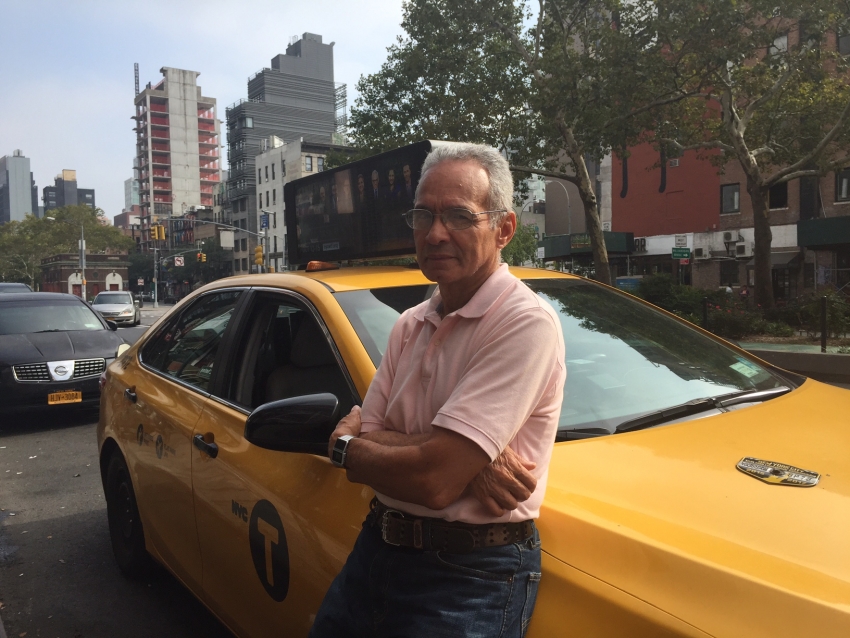 Tony Cobain, a recent college graduate in Washington, D.C., drives part-time for Lyft and Uber, so he can support himself while he pursues a career in entertainment. Along the way, he’s built his network and even snagged the occasional date.

Ride-hailing apps have been less kind to New York City yellow cab driver Asterfo Payano: He says he works harder and still earns much less than he did five years ago.

And Raul Rivera, a full-time New York Lyft and Uber driver, calls his job a “modern form of slavery.”

Ride-hailing apps have brought a new level of convenience to many consumers and provided new work opportunities. But these benefits have often come at the expense of full-time drivers’ wages and job stability. Both traditional taxi drivers and ride-hailing drivers are feeling increasingly squeezed.

Whether there’s room for improvement in this tradeoff depends on whom you ask. Many workers are pushing for a fairer deal, but some consumers and drivers, particularly part-timers, are leery of stricter regulation or driver unionization. Aggressive campaigning by ride-hailing companies has helped fuel opposition to such measures.

“The problem is that we haven’t figured out how to appropriately regulate ridesharing yet, so that we can capture the benefits without enabling all these harms,” Brishen Rogers, a labor law professor at Temple University, told In These Times.

“[Ride-hailing apps] are able to ensure that customers never have a very long wait or a very high cost for a ride,” Rogers said. However, he added, “the convenience is coming at the cost of a decent standard of living for drivers.”

The 23-year-old said he doesn’t have to worry about paying for maintenance and car insurance, because he uses his parents’ car. And he’s also covered by their health insurance plan.

The part-time work has allowed Cobain to build a music video company and a non-profit that makes films for people who suffer from debilitating mental illnesses.

“I don’t want to keep asking parents for money and stuff,” he said. “I kind of use both of these platforms to fund my business ventures, and whatever is left over is gas and Whole Foods money.”

Plus, he says he has turned many of his passengers into fans.

“This is how you get girls,” one female passenger teased him after she proposed drinks. “I was like, ‘no, no. I just do this to get Twitter followers.’”

There’s no doubt that ride-hailing apps have made it easier and cheaper to hire a driver.

But like many “sharing-economy” companies, ride-hailing services “are really providing services to Yuppies,” Rogers argues.

Meanwhile, full-time drivers like Payano, a 70-year-old yellow cab driver with 12 years of experience, are paying a price.

He shuttles passengers around Manhattan from 5:30 a.m. to 4:30 p.m. six days a week, earning $14 an hour on a good day, after expenses. That’s down from roughly $20 an hour five years ago, before Uber caught on, according to Payano

“I have to work a lot harder,” he said. “I can’t afford to take three breaks in the day. I take one.”

But even though times are tough, Payano and some of his peers say it still beats working for Lyft or Uber.

“I can see my income is going low, low, less, less,” said MD Asadullah, another New York City yellow cab driver. “If I go Uber, it will be way less.”

Indeed, long gone are the days when Uber and Lyft drivers could often make a killing, many drivers and analysts say (although Cobain might beg to differ).

Flooding the market with drivers while continually hacking away at fees hasn’t only squeezed taxis: Uber and Lyft drivers must compete more for passengers while earning less from each ride, said Rogers, the Temple University professor.

Ride-hailing drivers today earn roughly half the hourly wage that they did five years ago, reckons Harry Campbell, an industry expert who publishes the blog The Rideshare Guy.

On average, Uber drivers bring in $15.68 per hour and Lyft drivers $17.50 per hour before expenses, according to a survey of more than 1,000 drivers that Campbell conducted with help from researchers at Stanford University. After expenses, those figures likely fall by $4 or $5, according to Campbell.

“They [ride-hailing companies] aren’t saying, ‘Hey, you’re going to make as much as a McDonald’s cashier,’ but that’s turning out to be the situation for many drivers and maybe even a majority of drivers,” he said.

Asked about allegedly worsening conditions for full-time drivers, Lyft spokesman Scott Coriell said that the company has extended economic opportunities that didn’t previously exist to hundreds of thousands of people.

Lyft is “constantly working to help drivers succeed,” he added, pointing to the company’s introduction of tipping, same-day payments and “low-cost [car] rentals.”

Ride-hailing companies may profess a commitment to their drivers. But it doesn’t feel that way to Raul Rivera, a full-time Uber and Lyft driver who says he has been treated like a serf.

About a year ago, he signed a lease-to-own contract for an expensive SUV so he could provide higher-paying luxury rides.

Soon after, Uber instituted a new policy that required drivers to have a customer satisfaction rating of at least 4.8 to give luxury rides, he said. The driver’s rating fell short, so his investment has backfired.

The government should increase minimum fares and restrict the number of drivers, he said: “I don’t like regulations, but sometimes they’re necessary.”

Collective bargaining on the horizon?

Encouraging collective bargaining would be another way to protect drivers, although the fact that they tend to be classified as contractors makes formally unionizing “incredibly difficult,” Rogers said.

The App-Based Drivers Association, a Teamsters-affiliated group for Seattle ride-hailing drivers, and the New York Taxi Workers Alliance (NYTWA) are among organizations that have successfully pushed for better working conditions for drivers.

But the drivers they represent don’t have traditional collective bargaining rights. That could change in Seattle if a law that was passed in 2015 to allow taxi and ride-hailing drivers to formally unionize can survive legal challenges.

In addition to legal barriers, resistance from part-time drivers, who might see unions as a threat to the work flexibility afforded by ride-hailing apps, could prove an obstacle to collective bargaining, according to Campbell. Some Seattle drivers have spoken out against unionization, and a handful have sued the city to try to prevent it.

“They’re not as invested,” Campbell said. “For them to join a union is a much bigger ask.”

Representing the majority of ride-hailing drivers, part-time drivers benefit most from the ability to set their own hours, and they are less sensitive to price cuts and policy changes, according to Campbell, the publisher of the Ride Share Guy blog.

“The messaging that comes out from the app-based companies is more one of fear, telling them that somehow by collective bargaining… they’re going to lose flexibility, and nothing could be further from the truth,” said Leonard Smith, director of organizing and strategy at Teamsters Local 117, which hopes to negotiate contracts for Seattle taxi and ride-hailing drivers.

"The drivers are going to win eventually"

Cobain, who began driving for Uber and Lyft less than six months ago, says he’s heard Lyft and Uber don’t pay as well as they used to, and some drivers ask him how he can make the numbers work.

He says he drives early in the morning to cash in on “surge pricing,” when Uber and Lyft boost fares amid high demand and low driver supply.

For now, the work is a leg for him to stand on while he pursues his passions.

“I would oppose a union,” he said. “I actually prefer it the way it is. More flexibility.”

Labor activist Jonathan Rosenblum thinks such an attitude can change, having watched different groups of drivers find common cause in Seattle.

“I’m confident that the drivers are going to win eventually, and then Uber and the other companies are going to have their day of reckoning of having to sit down with the drivers and negotiate the terms of their work,” he told In These Times. “And that is a good thing.”