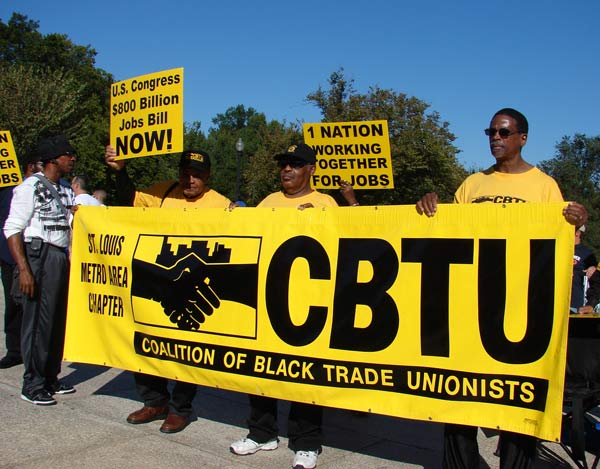 The Coalition of Black Trade Unionists is connecting environmental justice to racial justice. (Via CBTU)

When Terry Melvin was a boy in Lackawanna, N.Y., an afternoon siren would occasionally ring out, warning the city’s mostly black residents to the avalanche of red soot that would soon explode from the mouth of Bethelem Steel and blanket the city. But before making landfall, the thick dust would build a home in the lungs of whomever toiled inside the Bethlehem plant. Over the years, cancer would sink its teeth into many of the factory’s workers, including both of Melvin’s grandfathers.

And so long before he became President of the Coalition of Black Trade Unionists (CBTU), Melvin knew something of the harrowing connection between labor, communities of color and the environment. It’s a connection his organization, whose membership includes workers from more than 50 national and international unions, is ready to drill into the national consciousness.

I spent time at the CBTU's October 13-14th Save the Environmental Protection Agency conference in Atlanta, Ga., which brought together a grab bag of local and student activists, labor leaders and academics, all devoted to liberating their communities—and their world—from climate ruin. Their goal was straightforward: diagnose and set out plans to remedy what ails the EPA, an agency being rapidly rendered lifeless by EPA Administrator Scott Pruitt. The one-time Oklahoma attorney general, who described himself as a "leading advocate against the EPA's activist agenda," is now doing his part to hasten the end of human civilization as we know it. Earlier this month, in a perfect illustration of the fossil fuel industry’s capture of the agency charged with regulating it, Pruitt terminated former President Obama’s Clean Power Plan.

The CBTU, for its part, is working to build a counterforce to the Trump administration’s anti-environmental crusade. Conference attendees drew up a long list of tactics. From teach-ins to mobilizing regional and national allies, to campaigns aimed at pressuring EPA leaders and key policymakers, the conference featured all the hallmarks of a movement bracing for a long and difficult road ahead.

It’s a challenge Mustafa Ali―who helped found the EPA’s environmental justice program before stepping down as its leader in protest of the Trump administration’s climate policies―knows well. In his keynote address, Ali stressed that popular organizing has always been the moral compass guiding the EPA: “Whatever humanity the EPA has shown over the years grew out of the environmental justice movement.” And perhaps it is now being called on to do so again.

But why is a group of black trade unionists itching for this fight in the first place? Sure, there’s the high-villainy of Trump and his band of fossil fuel flunkies playing on the knife’s edge of climate catastrophe. But the CBTU is, at the end of the day, a union organ, and the fossil fuel industry has spent enormous amounts of money peddling the lie that labor and the environment are locked in a battle that only one can make it out of alive.

This myth was tackled in a number of ways. For starters, speakers made the point that there is an important labor element to preserving the EPA, with 1,200 EPA union jobs at risk. Attendees also discussed the concept of “just transition,” a framework for ensuring that workers from shuttering industries aren’t left behind on the road to a sustainable future. Not to mention that the working class has a powerful interest in Earth remaining suitable for human life.

But Payton Wilkins, National Director of CBTU Education Center, spoke of something more. The EPA is worth saving because it “plays an important role in protecting the communities our constituents, and people that look like them, call home.”

Here was the second, and in some ways loftier, goal: It is not enough to protect the EPA from being blown to smithereens. For CBTU, an EPA worth saving is one that grasps the lethal stakes of climate disaster for communities of color, and pursues racial and environmental justice as vital parts of its mission.

“We want the EPA to exist, but we want it to do right,” Ali said. “This is about the survival of our community.”

Which is to say, before climate disaster became a feature of daily life, communities of color were already caught in the eye of the storm. Studies consistently show that communities of color face greater exposure to air pollution and lead poisoning, live closer to landfills and hazardous waste sites, and are among the first to experience the wreckage of extreme weather.

Today’s environmental justice movement conjures many faces, few of them black, few of them women and fewer who are both. But it is no accident that the weekend’s most powerful words came from this class of unsung heroine. “We have a job to do. We have a world to save,” said Donele Wilkins, longtime activist and current president and CEO of Green Door Initiatives, a Detroit-based organization working to spread environmental literacy and promote sustainability. “And we’ll start right here, in our own land.”