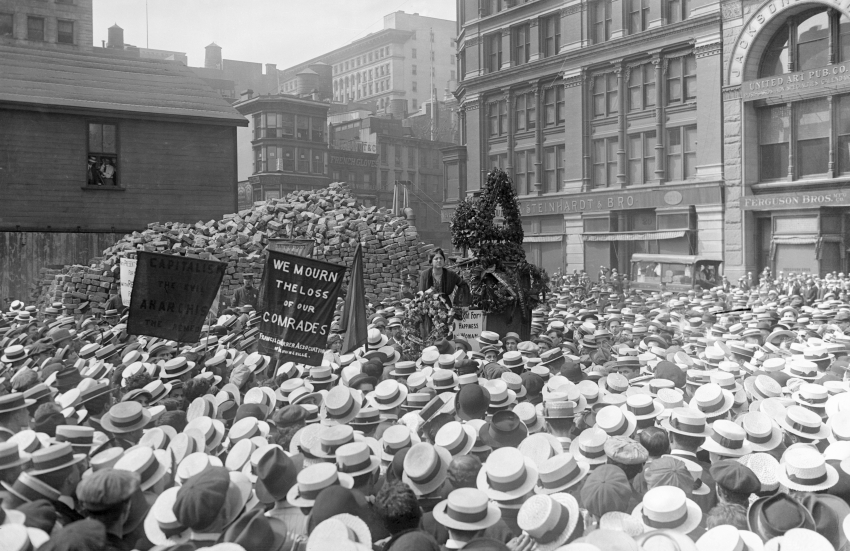 Declaring, “an injury to one is an injury to all,” the Industrial Workers of the World (IWW) upended and forever changed the labor movement a little over a century ago. The Wobblies’ commitment to organizing workers on an industry-wide basis, their cynicism about legislative action and electoral politics, their aversion to signed contracts and their preference for sudden strikes remain fascinating subjects for labor studies. Their multiculturalism, anti-racism and pioneering bohemian approach to God, country and sex remain a rich vein to be mined for cultural studies.

Although there is no shortage of books about the history of the IWW, they mostly tell the story of a North American union and revolutionary movement. But naming themselves the Industrial Workers of the World was no mere rhetorical flourish. The globalism implied in their name is fleshed out in a new book, Wobblies of the World: A Global History of the IWW, edited by In These Times contributor Peter Cole, along with David Struthers and Kenyon Zimmer.

In American parlance, the national bodies that connect our local unions are typically referred to as “international” unions, which basically means that they have a couple of locals in Canada. That’s what the “I” usually stands for in a union’s acronym.

Landing on the “of the World” part of its name in 1905 was a conscious act of internationalism by a founding convention delegation that contained no small number of immigrants. Significantly, prewar immigration didn’t require nearly as much paperwork, and a worker might call several countries “home” while chasing transplant jobs in that earlier era of globalization. Globetrotting workers both imported new ideas and tactics to the IWW and exported the Wobbly gospel. The papers that are collected in Wobblies of the World explore both dynamics.

Kenyon Zimmer’s chapter examines the various foreign national and ideological influences that helped develop the IWW’s “direct action gets the goods” credo. Interestingly, he also finds evidence that the legendary Paterson silk strike of 1913, which has traditionally been portrayed as a “spontaneous” work stoppage that the IWW then came to the aid of, was actually sparked by Italian anarchists who were salting the factories. Elsewhere, Dominique Pinsolle explores the ways that Wobblies Americanized the French concepts of syndicalism and sabotage.

Much of the back-and-forth transnational migration was facilitated by Britain’s extraction of natural resources from its imperial holdings, which created a voracious need for itinerant workers. And so IWW chapters were most common in the English-speaking world. The Wobblies’ most practical global legacy may be its commitment to interracial organizing. Mark Derby mines the surprising archives of the first Maori-language union literature distributed in New Zealand. Lucien van der Walt documents how the Wobblies were organizing on a multi-racial basis in South Africa decades before the Communist Party and the African National Congress.

Other fascinating contributions include Tariq Khan’s account of how colonial India’s diasporic Ghadr (an Urdu word for mutiny) movement found itself at home in Wobbly outposts in the American west, and Marjorie Murphy’s tale of how Jim Larkin’s and James Connolly’s brief experience as American IWW’s influenced the Irish Easter Uprising.

The IWW has such an outsized role in our romantic imagination of labor’s past glory. Frequently, treatments of the Bread and Roses strike, the many arrests of “Rebel Girl” Elizabeth Gurley Flynn or the lynching of organizer Frank Little play like a left-wing equivalent of the History Channel’s “all World War II all the time” approach to scholarship.

What I find more interesting is how Wobbly activists evolved and reinterpreted the one big union’s principles as the march of history moved on. Call them the Weird Wobblies.

There is a growing body of Weird Wobbly scholarship. Howard Kimmeldorf wrote the terrific Battling for American Labor on how a couple of strong IWW locals from the prewar era eventually found homes within AFL craft unions. David J. Goldberg looked at how A.J. Muste and Evan Thomas (brother of Socialist leader Norman) re-organized the former IWW Paterson, Passaic and Lawrence textile workers into an independent union modeled on the Amalgamated Clothing Workers in the 1920’s in A Tale of Three Cities. The effort was crushed in the open shop era that followed World War I. From its ashes arose Brookwood Labor College, which played an essential role in developing the strategies and tactics that led to labor’s great upsurge in the 1930’s.

Wobblies of the World is a valuable contribution to this niche field of labor studies. This global history of the IWW was a challenging project. Given the number of languages that required translation and mastery of national histories required for context, a volume like this would necessarily need to be an edited collection of papers. One hopes this book is not the last volume on the global influence of the IWW.

Of course, while I use the past tense to describe the Wobblies’ heyday, the IWW is still an active workers’ organizing project. Twenty-first Century Wobblies are weird by definition, but they are nimble and thoughtful and picking some very strategic fights. In New York City, they are the backbone of Brandworkers, a workers center that leverages direct action and boycotts within the food chain of the city’s fancy restaurants and markets to improve the lives of low-wage workers. In the Midwest, they have sparked a  “free speech” fight with their protest over Jimmy Johns sandwich shops’ abysmal and unhygienic sick day policy.

It’s precisely this sort of experimentation that is crucial for figuring out our way towards labor’s next great upsurge. The Wobblies may live long enough to upend and forever change the labor movement once again.