Fight for $15 Just Scored a Big Win in Maryland. We Have Unions to Thank. 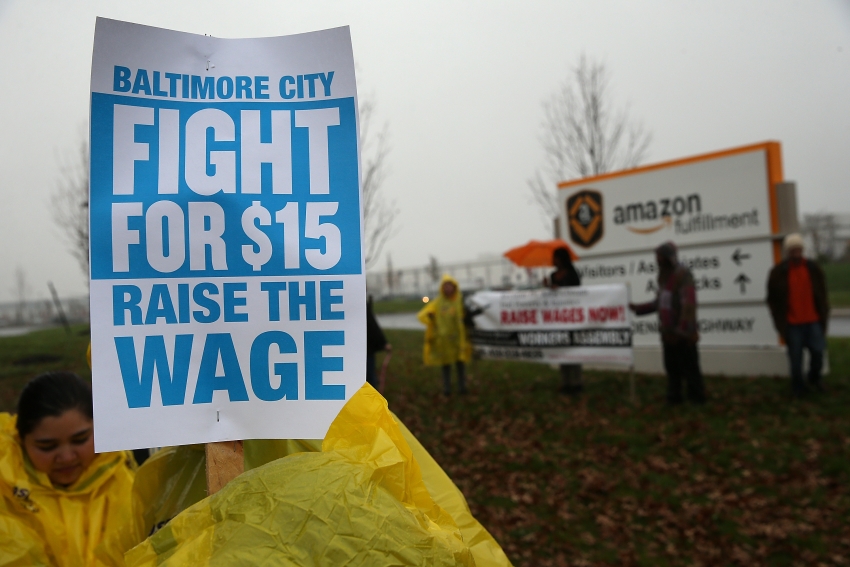 Protesters rally at a 'Fight for $15 Day of Action' protest outside of an Amazon fulfillment center on November 10, 2015 in Baltimore, Maryland. (Photo by Win McNamee/Getty Images)

A law establishing a $15-an-hour minimum wage in Maryland’s Montgomery County was signed into law Monday, representing a comeback win after a similar measure was defeated by pro-business Democrats just ten months ago.

It’s a meaningful victory for the Fight for $15, the union-inspired campaign to raise wages nationally. Montgomery is the most populous county in the state, with a larger population than the nearby cities of Washington, D.C., or Baltimore. It’s also a bellwether for Maryland politics, where organizing has begun already ahead of the 2018 statewide elections, including organizing aimed at improving Maryland’s wage laws.

“The difference that $15 an hour will make for so many working families cannot be underestimated. And the entire county will benefit as more workers will be able to move off publicly funded programs and spend more on local businesses,” Jaime Contreras, vice president of Service Employees International Union (SEIU) Local 32BJ, told In These Times over email.

Contreras and SEIU have been prominent in the labor coalition that has been supporting a higher minimum wage, along with the United Food & Commercial Workers (UFCW) union, the Laborers’ International Union of North America and others. “We are really proud of what we have accomplished. As with any compromise, we are not totally pleased, but this is a real step forward,” Jonathan Williams, spokesperson for UFCW Local 400, told In These Times.

“The $15 minimum wage win in Montgomery County comes on the heels of last week’s 11 victories of Fight for $15 supporters Ralph Northam in Virginia and Phil Murphy in New Jersey. It shows the continued power of this movement and builds momentum for state-wide action next year in Maryland and other states,” Christine Owens, executive director of the workers’ advocacy group National Employment Law Project, told In These Times over email.

Satisfaction with the victory notwithstanding, some worker advocates grumbled that the political compromises necessary to solidify support came at a high price for some workers. The compromises had been hammered out over the last several months in response the Montgomery County Executive Ike Leggett’s veto of similar legislation approved by the County Council in January.

One of these compromises was an exemption from the law for workers under age 20, a concession to Leggett’s concern that the increase would hurt job opportunities for minority youth. Another compromise extended the phase-in schedule of higher wages so that the $15 minimum does not take effect for small employers until 2023 (50 workers or fewer) or 2024 (10 workers or fewer). For large employers, the new minimum will be phased in through 2021.

Owens said Montgomery “residents should be concerned that county leaders excluded from the full $15 wage younger workers—many of whom are from low-income families or are struggling to work their way through two or four-year colleges—and tipped workers. We urge the county council to revisit and remove these harmful carve-outs.”

Williams added that the UFCW is among those advocating for a state-wide $15 minimum wage bill that could address the problems in some of the carve-outs. Political efforts are initially focusing on selecting a Democratic Party candidate for governor who will be a reliable supporter of $15. Currently, there are numerous candidates in the race, and Democrats are debating who would be the strongest candidate against incumbent Republican Larry Hogan, Williams says.

Hogan is not a supporter of a higher minimum wage and provoked the anger of many workers’ rights advocates in Maryland earlier this year when he vetoed a bill to provide guaranteed sick leave to workers in the state.

UFCW has not endorsed any candidate yet, but SEIU issued an early endorsement of Benjamin Jealous, the former head of the NAACP who is running for governor on a Bernie Sanders-inspired progressive platform, including the $15 minimum wage.

Aside from positive signs in local political races, Fight for $15 recently got a boost from one of the largest private-sector retailers in the country, Target stores. Following worker organizing, Target officials announced in September it would raise the minimum wage for Target employees to $11 an hour this year, with the goal of reaching $15 by the end of 2020. Target currently employs more than 300,000 workers nationwide.