Republicans Are Taking Voter Suppression to the Workplace 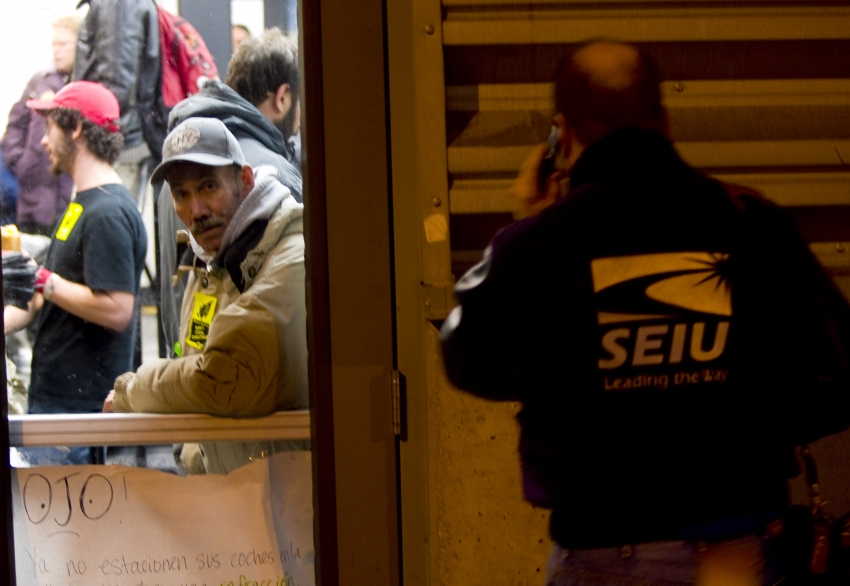 Employees of Republic Windows and Doors factory occupy the main entrance to the factory December 9, 2008 in Chicago, Illinois. (Photo by Darren Hauck/Getty Images)

A Republican party that survives through voter suppression may be replicating its model in the workplace. In December, the National Labor Relations Board (NLRB) invited public commentary on a possible revocation of a rule that makes employers provide union organizers with contact information for workers in advance of a representation election.

Ostensibly, the Board, which will almost certainly remain in control of Republicans until 2021, is reconsidering Obama-era rules that sped up the timeline of union elections and added phone numbers and email addresses to the list of contact info that unions must be furnished before an election. But outgoing Board Chairman Phil Miscimarra’s bellyaching about “employee rights of free choice and privacy” implies openness to removing any legal right of union organizers to talk with potential members.

The very fact that Trump’s NLRB is inviting public comment indicates that it is considering reversing a much older precedent: the 52-year-old Excelsior rule that employers should provide a list of names and addresses of eligible voters in an upcoming union certification election. Sharon Block, a former member of the NLRB and current Executive Director of the Labor and Worklife Program at Harvard Law School, has argued that the slew of hastily-decided reversals of second-term Obama precedents "seemed to be a rush to set the clock back on workers' rights as much as possible."

The Excelsior rule makes employers provide union organizers with a list of eligible voters and their home addresses a few days before an election. It’s an essential tool in a campaign, and any cut is a blow to unions. However, it is also important to remember that Excelsior was a bad compromise, and a real solution lies in actual free speech in the workplace. That will require that unions wage a free speech fight to regain our voice at work.

Captive-audience meetings versus knocking on doors

As soon as the National Labor Relations Act was passed in 1935, employers were already challenging the legal framework for workers to organize and bargain collectively.

In six short years, the bosses succeeded in demolishing the Act’s mandate of employer neutrality by strenuously appealing to the Supreme Court that the standard restricts bosses’ First Amendment right to inform their workers about just how strongly they oppose unionization. Six years after that, a Republican Congress codified this unequal application of free speech in the Taft-Hartley Act.

For a brief time after Taft-Hartley, the NLRB enforced an equal time standard by granting union organizers access to talk to workers on the job when an employer conducted captive-audience meetings. In an all-too-familiar pattern, the Board ping-ponged back and forth between different legal standards on employer speech and union access, depending on which political party was in the White House, until 1966.

That was the year of Excelsior Underwear, Inc ., the NLRB decision that established the right for unions to be furnished with a list of names and addresses of eligible voters. It was issued on the same day that the Board declined to reinstate the equal time rule. The case that we should have won that day was General Electric Co. and McCulloch Corp.

Loathe to trample on management’s rights and private property, the Democratic majority begged the unions in that case to try visiting workers at home and see if that effectively counter-balanced the boss’s work-time campaigning.

Anyone who has worked as a union organizer will tell you that an Excelsior list is no match for the mandatory round-the-clock campaigns of intimidation that union-busters consider “management’s most important weapon” in beating back an organizing drive.

Kate Bronfenbrenner, director of Labor Education Research at Cornell University, has been documenting employer union-busting tactics for decades. Her most recent study, covering the period of 1999 to 2003, found that 9 out of 10 employers use captive-audience meetings to fight a union organizing drive. Bosses threaten to cut wages and benefits in 47 percent of documented cases, and to shut down entirely in 57 percent of union elections. Incredibly, in one out of 10 campaigns employers hired “consultants” to impersonate NLRB agents.

That report is nearly nine years old. It is likely that when Dr. Bronfenbrenner updates her research, all of these numbers will be even higher—particularly the instances of outright lies and deception.

Within the General Electric Co. and McCulloch Corp. decision, the NLRB explicitly invited unions to press the issue of equal time if experience were to prove that knocking on workers’ doors was no match for mandatory captive-audience meetings. Labor law scholars Charles Morris and Paul Secunda were clever enough to notice this half-century-old invitation. Last year, they organized 106 of their leading peers to sign on to a petition to the NLRB to reinstate the equal time rule.

The right to free speech

We shouldn’t hold our breath waiting for Trump’s NLRB to respond to that petition, but we also shouldn’t be patient about demanding change. This past summer, I proposed that unions wage a constitutional battle to challenge the most unequal aspects of labor law and fight for workers’ constitutional rights on the job. Call it Labor’s Bill of Rights.

At the heart of the problem is that the National Labor Relations Act derives its constitutional authority from the Commerce Clause. That means that when workers’ rights are challenged in the courts, judges are weighing corporations’ First Amendment claims against unions’ claims that workers’ rights to organize and go on strike are good for business.

Under that framework, bosses’ rights and business interests have trumped workers’ free speech and human rights. Consider union certification elections. These are official legal elections conducted by an arm of the federal government. At stake is whether the government will enforce certain statutory rights of the workers who wish to form a union. The rules of the election are determined by the government through court decisions, congressional action and NLRB rule-making.  In this simple “yes” or “no” vote about whether there shall be a union, only an employer—and only one advocating a “no” vote—can force voters to attend speeches where they will tell them how to vote And if any voter declines to attend, she can be fired. This is compelled political speech and a massive violation of workers’ free speech rights.

Perversely, Trump’s NLRB could be doing us a favor if it really does kill Excelsior lists by making the imbalance of free speech rights in union organizing campaigns that much starker. Regardless of what new form of union busting the Trump NLRB endorses, we should start waging a campaign to restore the equal time rule now.

What this free speech fight would look like as a campaign is this: every time an employer stages a captive-audience meeting in advance of a union election, we should file an Unfair Labor Practice charge. And every time a union loses an election where the employer conducted captive-audience meetings (which, again, is almost always), we should file an appeal to have the election results overturned.

We should be filing these cases now, even with a Trump Board that will dismiss them all. If we can file a couple hundred challenges and make enough noise about them, we can turn the free speech fight over captive-audience meetings into an obvious controversy that the next Democratic-majority NLRB must respond to.

A Democratic NLRB with a modicum of decency would—at a minimum—re-establish the rule that conducting captive-audience meetings while providing union advocates no right of response is grounds to void an election and order a re-run. Better would be a rule making the very act of conducting captive-audience meetings an Unfair Labor Practice subject to court injunctions, unless union advocates are granted an equivalent platform—in work locations, on work time—from which to campaign for a union yes vote.

If the NLRB were to rule in our favor, we should expect the first employer to face sanctions to resist and drag the case into the federal courts. And then we’re off to the races with a well-deserved counter-attack to the cynical right-wing Harris, Friedrichs and Janus efforts to use free speech as a cudgel against union rights.