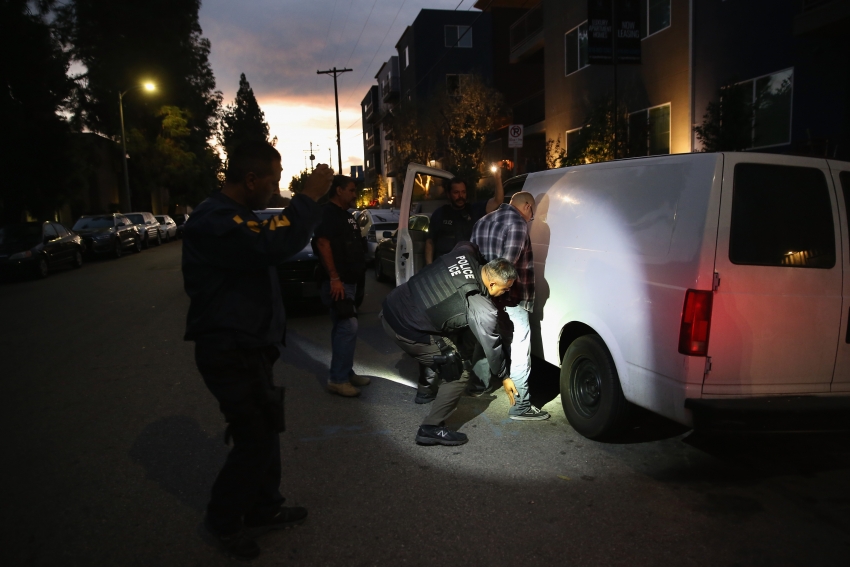 A man is detained by Immigration and Customs Enforcement (ICE), agents early on October 14, 2015 in Los Angeles, California. (Photo by John Moore/Getty Images)

An 18-year-old Riverside High School student was on his way to school when he was detained by Immigration and Customs Enforcement (ICE) agents two years ago. ICE had flagged Wildin Acosta, a North Carolina teen who was a semester away from graduation at the time, as a “high priority” for deportation because he’s originally from Central America and had missed an immigration court date.

Due to the length of time he’s been in the United States without authorization, Acosta wasn’t entitled to an immigration hearing when ICE first detained him on January 28, 2016. Later that day Mika Twietmeyer, one of Acosta’s teachers, heard what happened and called her union.

“Hey Mika. What’s going on?,” answered Bryan Proffitt, president of the Durham Association of Educators. He was on his way to a Thursday evening happy hour when his phone started buzzing.

“Bryan, ICE detained our one of our kids in his front yard this morning,” said Twietmeyer, angrily.

Proffitt, a teacher for the past 11 years, was elected president of DAE in the spring of 2016. Like other unions, DAE has organized around “bread and butter” issues, like a 2015 campaign to convince the county commission to chip-in for a 3 percent raise for bus drivers and cafeteria workers—their first raise in seven years. The union has also intervened with school administrators when teachers and other staff identify problematic management by principals.

But their focus on grassroots organizing rather than intervening on behalf of workers with a grievance is unique among Southern unions.

“Recently some members in a school complained about mold in a library, that the district hadn’t really addressed, so we invited them to build a team to address it,” Proffitt says. “They drafted and sent a letter to administrators, and called a meeting with them at the library in question. As staff, we coached them a little, but they did the rest.”

Similarly, rather than rely on staff representatives for each school, DAE encourages teams to organize themselves with roles that make the most sense, to encourage broader leadership development.

“We ask our leaders to look at who hangs with who, to make sure all staff are represented in our building-level organizing,” Proffitt says. The union also creates opportunities for socializing across schools, like pickup basketball games, yoga sessions, a monthly family-friendly happy hour and a back-to-school cookout.

Proffitt and a few other newly elected officers want to emphasize the role of grassroots organizing in building union power. It’s an uphill battle as DAE is in a state where public sector workers don’t have bargaining power. North Carolina is one of only five states with laws on the books banning teachers from collective bargaining.

So at the time of Twietmeyer’s call, Proffitt had a lot on his mind—chiefly, how to support his leadership team of teachers and parents to grow a union constantly under attack by the state’s general assembly, causing it to lose membership across the state. At the time, the most recent round of high-profile immigration raids launched by the Obama Administration were not on DAE’s to do list.

“I didn’t think there was much we could do,” Proffitt says, thinking back to that phone call. “I didn’t have much capacity to respond, and our members had their hands full, too.”

But word spread quickly among DAE leadership the weekend after Acosta was taken. The following Monday, DAE members at a school board meeting to comment on another issue ran into Acosta’s mother. She was with members of Alerta Migratoria, a local immigrant activist group.

Alerta had come out to urge the school board to pass a resolution demanding Acosta’s release from ICE custody. DAE members invited people who felt angry about what had happened to Acosta to join them at DAE’s monthly member meeting the next night.

DAE’s leadership team had expected around 15 people, but more than 30 showed up—including parents and teachers from Riverside with no previous connection to the union. The night ended with the creation of a new committee charged with building a campaign alongside Alerta to get Acosta released. Right away, this committee started reaching out to local elected officials, asking them to make public statements in support of Acosta and to reach out directly to ICE and Homeland Security officials to demand his release.

DAE’s statewide parent union, the North Carolina Association of Educators, and national union officials with the National Education Association, got involved as well. Meetings with Durham congressional representative G.K. Butterfield and, later on, Homeland Security Secretary Jeh Johnson, were set. National groups like Mijente and the National Lawyers Guild contributed their expertise, too.

“We went from only one school in the district having its own monthly DAE member meeting to two schools with a monthly meeting,” says Holly Hardin, a middle school teacher and DAE board member.

Both teachers and parents raised money for Acosta’s legal fees. They also arranged campaigns to send him letters and books to keep up his schoolwork, as well as digital actions—like an online “selfie” support campaign by Acosta’s classmates in their graduation gowns. Congressman Butterfield even joined students on one of the trips to visit Acosta at the detention center eight hours away in Georgia.

By the end of last March, with calls pouring in, ICE told Butterfield that Acosta would be granted an immigration hearing. The teen began helping other detainees. Soon after the detention center became aware of this, Acosta was placed in solitary confinement for not making his bed, not being at his bedside during sleep time and refusing to obey an order while helping another incarcerated person translate a letter from Spanish to English, according to Indy Week.

Representatives from ICE and the Department of Homeland Security did not respond to a request for comment at press time January 25.

By July 2016, Acosta’s deportation had been canceled. The following month he was granted a bail of $10,000, which the community quickly raised, and he was released. In June 2017, he completed his classes and participated in Riverside’s graduation ceremony. Acosta, now 21-years-old and married, is still appealing a deportation order, according to the Herald-Sun.

Today, DAE's immigration committee continues to organize, as does the committee based at Riverside.

“In our end of year member survey, a lot of new members identified the Wildin [Acosta] campaign as the reason they signed-up,” says Hardin.

Editor's note: A previous version of this story stated Wildin Acosta's deportation had been canceled July 2017. This happened in July 2016. The article has been revised to reflect that.

Andrew Willis Garcés works with Siembra NC and Training for Change, and is based in Greensboro, N.C.