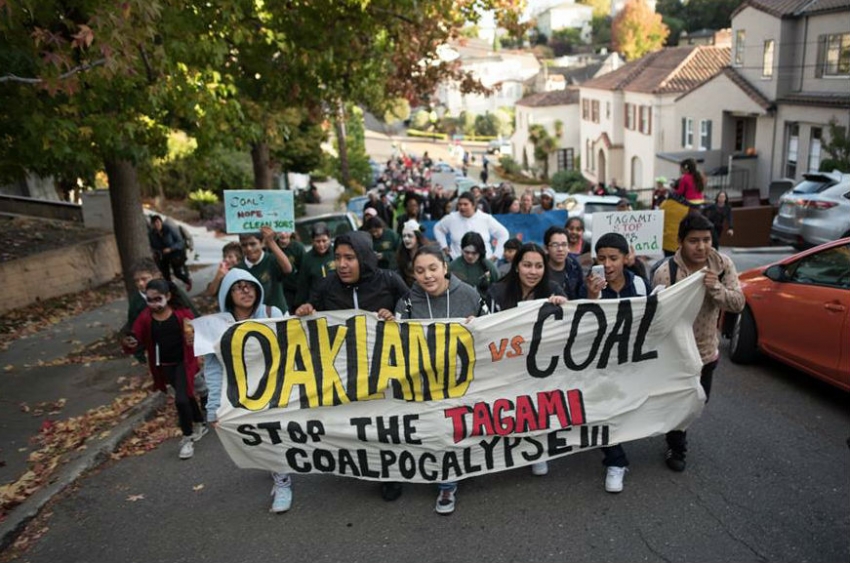 Roughly 200 workers and youth marched on Oakland developer Phil Tagami’s house October 30th, 2017 to demand that he drop the lawsuit and all plans to build a coal terminal in Oakland. (Photo: Sunshine Velasco/Survival Media Agency)

In Oakland, California, labor and environmental activists have worked together to successfully stop—at least temporarily—a new coal export terminal from being built on the city’s West Side. After residents learned in 2015 that the export site had been added onto a proposed waterfront project by Bay Area developer Phil Tagami, they quickly organized to convince Oakland City Council to block the project. While a judge considers whether or not to allow the plant to move forward, the story exemplifies a growing trend: Labor and environmental movements are overcoming old antagonisms and increasingly joining forces to protect jobs and build a greener, healthier future.

As Oakland activists and community members wait for a decision on the proposed coal project, climate and labor activists in the Bay Area and beyond are working to foster critical collaborations on multiple fronts. Short-term projects, such as the Dakota Access Pipeline, are often justified on the grounds that they bring jobs to struggling communities. Yet, labor and environmental groups point out that when that work is completed, the jobs dry up—and what’s left is polluted water, air and other long-term damage to the environment.

In Oakland, oil industry executives are attempting to use this faulty logic to ram the export terminal through. According to Jerry Bridges, CEO of Terminal Logistics Solutions, one rationale for allowing coal to be moved through Oakland via railroad cars is that people in the city desperately need the work. Unemployment numbers for Oakland show that just over 5 percent of city residents lack full-time employment, although these numbers are notably higher for people of color.

But organizers like Brooke Anderson of the Oakland-based group Climate Workers have not fallen for the argument that any job is a good job. Climate Workers is a side venture for the member and union-funded group, Movement Generation Justice & Ecology Project. Through Climate Workers, Anderson is helping pair workers’ interests with what she says is the immediate need to build a greener economy.

Along the way, she has worked closely with Oakland-area community activists to ban Tagami’s project on environmental grounds. A major concern is that working people, particularly working people of color, stand to bear the brunt of any toxic impact from the coal export terminal. “Coal is shipped on open cars,” Anderson points out. “Coal dust flies off the trains and lands on the communities and into the lungs of those closest to the train tracks.”

Among the communities closest to the development are Chinatown and West Oakland, whose residents have protested vociferously against the move to bring coal into the city.

Many Oakland activists have fought the proposed coal project on broader environmental grounds. If Tagami’s development goes through, it would facilitate the shipping of coal from Oakland to coal-burning plants in Asia. But protesters and activist groups like the Union of Concerned Scientists have pointed out that burning coal brings climate change and threatens human and animal populations around the world.

It is encouraging, in Anderson’s view, that labor groups such as the International Longshore and Warehouse Union (ILWU) have also stood up to Tagami’s coal export plans. In a 2015 press release, the ILWU announced its opposition to coal, saying “longshore workers are standing by community members who do not want the worry and risks of nine million tons of coal passing through their neighborhoods on trains each year.” The union also said it rejects the typical pitch to labor interests, noting that “coal is not the right way to bring jobs to Oakland.”

According to the ILWU, coal is both an environmental hazard and a “dirty, low-value cargo.” Instead, the ILWU says it wants developers like Tagami to invest in “cleaner, safer” products.

In response to public concerns, Tagami has reportedly commissioned his own environmental reviews of coal as part of an ongoing lawsuit against the City of Oakland and its ban on the coal export project. Environmental scientist Lyle Chinkin, who was hired by Tagami, testified recently that Oakland’s City Council overlooked new technologies that could help keep coal dust emissions down. City residents are currently awaiting the judge’s decision in Tagami’s lawsuit, which could determine whether or not he will be allowed to move coal through Oakland.

Tagami did not reply to a request for an interview.

Turning away from the fossil fuel industry

Meanwhile, similar campaigns to bring environmental and labor movements together are being waged across the United States. This growing alliance is at the heart of Michael Leon Guerrero’s work with the Labor Network for Sustainability (LNS). Leon Guerrero has been an environmental activist for years, having gotten his start by helping low-income communities in New Mexico push for equitable cleanup of their land. Today, as director of the LNS, he is at the helm of efforts to change the narrative around labor and its role in climate justice.

The LNS was started by Joseph Uehline, who rose up through union ranks as a steelworker and construction crew member before eventually becoming the AFL-CIO’s representative on the United Nations’ first global warming commission in the 1980s. His vision, according to Leon Guerrero, was to see labor take on a key role in the move to “get off fossil fuels and other extractive industries.”

It hasn’t been easy. Leon Guerrero acknowledges that labor has been notoriously slow to embrace changing economic realities. He also points to what he says are burned bridges in the eyes of unions, such as the North American Free Trade Agreement (NAFTA), which Leon Guerrero describes as a “grand scheme to basically use Mexican labor for U.S. corporations.” At the time, he says, labor unions fought against NAFTA on the grounds that jobs would be lost in the push for cheaper manufacturing costs and higher corporate profits.

In the end, NAFTA “failed everybody,” Leon Guerrero asserts, and left workers in rust-belt states with closed up factories and diminished future prospects. It also left traces of skepticism and distrust, since, he contends, “workers were not protected” in the rush to globalization.

“The consequences were felt in the 2016 election,” he says, when “union members voted against Clinton.”

Now, Leon Guerrero says, “we need a real, comprehensive, large-scale national effort to transition our economy to a clean energy economy.” But, he cautions, labor unions must not only be at the forefront of this effort, as he says they are in places like Washington state and New York, but there must be a real payoff for working people. Past green-jobs initiatives, Leon Guerrero believes, have brought promises and training but few, if any, living-wage jobs.

“Workers are making six-figure salaries in refineries, and they are proud of their skills and the training they have received,” he points out. “So, what? They’re going to give up their job for solar installation work, making minimum wage?”

The way out still may come from labor joining forces with environmental activists. In Washington, Jeff Johnson is the president of the state’s AFL-CIO labor council. In 2017, Johnson’s labor organization passed a resolution in favor of a move towards renewable energy, as long as it includes a call to “protect workers whose jobs were lost because of the transition away from fossil fuels.”

Anderson of Climate Workers agrees with this stance. She has been involved in labor rights campaigns for more than a dozen years and has watched as many policy-driven shifts to better environmental practices have landed on the shoulders of working people. Workers say the move to reduce water use in hotels, for example, has led to layoffs among housekeeping staff, while truckers—who are often independent contractors—have struggled to keep up with the push to drive expensive, new greener vehicles, which they are often expected to pay for themselves.

“Many truckers are really low-wage, immigrant workers making $20,000 per year. How can they afford $100,000 trucks?” Anderson asked in a recent phone interview. (This issue came to a head in Oakland in 2009, when new emissions standards forced many truckers out of work.)

According to Anderson, the claim that workers can have either a good job or a healthy environment is a false dichotomy: “More dollars in your paycheck doesn’t mean as much,” she says, “ when your kids have asthma or you develop cancer.”