The NLRB Just Dealt a Major Blow to the Fight for $15. Now’s the Time to Take Stock of the Campaign. 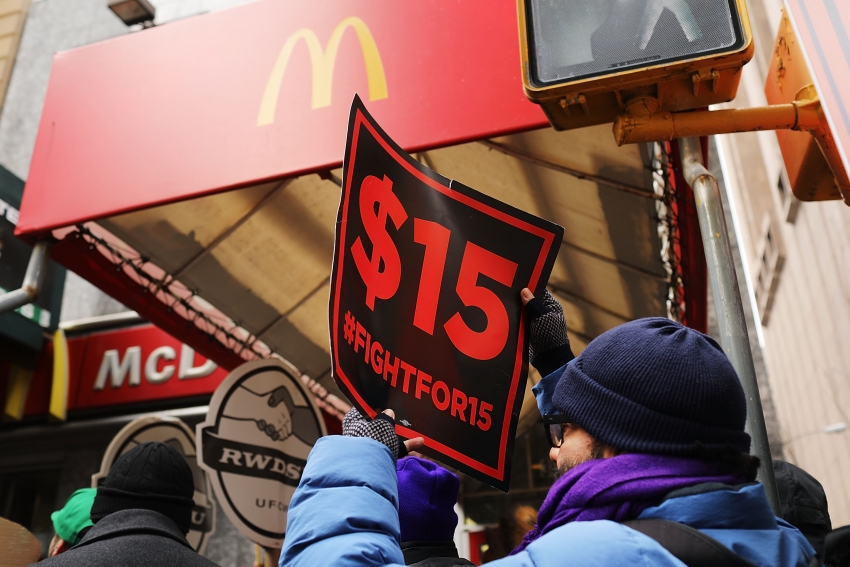 Protesters with NYC Fight for $15 gather in front of a McDonalds to rally on February 13, 2017 in New York City. (Photo by Spencer Platt/Getty Images)

The reported tentative settlement of a landmark case against McDonald’s at the National Labor Relations Board (NLRB) deals a blow to Fight for $15’s union ambitions, widening the chasm between the campaign’s astonishingly successful wage demand and its faltering union aspirations.

The settlement, negotiated by Trump-appointed NLRB General Counsel Peter Robb, requires McDonald’s to pay damages for retaliatory measures taken against workers who organized with Fight for $15. However, the agreement would prevent a ruling in the case, dealing a blow to labor. Unions were hoping that a ruling would establish a precedent for holding fast food companies accountable as the direct employers of millions of workers at franchise restaurants across the United States.

The settlement is pending approval from NLRB Judge Lauren Esposito. If the settlement holds up, the workers and their representatives can appeal it.
In the event of a favorable ruling, the arduous path to unionizing en masse at McDonald’s—and other fast food chains—would have at least become legally permissible. But now, fast food workers appear more likely to remain the employees of their immediate franchise, not its parent company.

Since the inception of Fight for $15, the demands of the campaign have doubled as a mantra for the labor movement: $15 and a union. Translation: A living wage means less without the protection of a collectively bargained contract, and vice versa. But as Fight for $15 notched minimum wage hikes in cities and states across the country, the union strategy receded, mirroring the decline of union membership nationwide. The NLRB settlement deepens that trend.

But the Fight for $15 has adapted by deploying its wage tactic—local legislative victories enabled by high-profile strikes—to secure features of union contracts, like fair scheduling and even dues payment. (Read more about that strategy here).

The NLRB settlement will likely accelerate this shift toward worker gains won at city councils and statehouses, though the union strategy will continue to serve as a public-relations and organizing tool.

“I don’t want to write the last chapter yet,” Janice Fine, a professor at the Rutgers University School of Management and Labor Relations, told In These Times. “I don’t think NLRB decisions, things being tied up in court, can defeat organizing.”

The settlement resolves a dispute between McDonald’s and the NLRB that stretches back to 2015, when the company allegedly committed more than a dozen labor violations against workers participating in the Fight for $15. Crucial to the case was the question of whether workers could hold McDonald’s liable, as a “joint employer,” for actions taken by individual franchise owners. A trial began in 2016 and neared a decision in January, when an NLRB judge granted a 60-day stay for settlement talks.

Soon after, a scandal rocked the NLRB, reversing agency policy on the joint employer question at the heart of the case. NLRB Inspector General David Berry determined that a conflict of interest should have prevented board member William Emanuel from casting the deciding vote in a crucial 3-2 ruling last December, which tightened the joint-employer standard. On Feb. 26, the NLRB vacated the December ruling, reverting agency policy back to an Obama-era judgment that made it easier to assign joint-employer status to a parent company like McDonald’s.

Noting the abrupt shift in agency policy, Fight for $15 and other labor advocates urged Robb, the NLRB general counsel, to abandon settlement talks and resume the McDonald’s trial. On March 7, a group of five liberal senators joined the chorus, among them Elizabeth Warren and Cory Booker. Their advocacy fell on deaf ears.

The saga demonstrates how much a fast food union depends on having a Democrat in the White House. Without a pro-labor NLRB to fight an extended legal battle, the fast food chains can fall back on precedent that forbids a company-wide union and deflects costly liability for labor violations. On this point, Fight for $15’s union strategy can learn from its wage hike approach. As the legislative efforts have eschewed Congress and sought receptive local and state legislatures, so too the union drive should wait for a Democratic president to appoint a favorable labor board, especially in light of the high pace of turnover in fast food jobs.

But that prescription operates on the assumption that the sole desired outcome of the Fight for $15 union strategy is, in fact, a fast food union. Such a monumental labor victory would prove a boon for the Service Employees International Union (SEIU) and the labor movement, of course. But regardless of its success, the union strategy serves as a public-relations and organizing tool. Last August, a Gallup poll found 61 percent of U.S. adults approve of unions. That figure is the highest recorded since 2003 and 9 points above the rate in 2012, when Fight for $15 began. The favorable attitude toward unions helps the labor movement ensure that, as midterms approach, Democratic candidates take strong positions in support of organized labor.

Perhaps that’s why the campaign does not plan to pause its union strategy, according to Mary Kay Henry, president of the 2-million-member SEIU that backs Fight for $15. On March 22, days after reports of a McDonald’s settlement surfaced, Henry reiterated her commitment to the fast food union as part of a congratulatory tweet to workers who won a pay raise recommendation from the Port Authority that controls New York and New Jersey airports. “Every airport worker across the country deserves the same and we won’t stop till fast food workers get their union too,” Henry wrote.

Tellingly, a government-mandated wage victory brought about Henry’s reiteration of commitment to the union strategy. But airports are a low-wage workplace where SEIU has also succeeded in traditional union organizing, perhaps due in part to inroads facilitated by Fight for $15. In linking the success of airport workers to Fight for $15, Henry suggests the union organizing benefits of the fast food campaign extend beyond the struggle to identify McDonald’s as a joint employer.

Make no mistake, the NLRB settlement is a significant setback for Fight for $15. But the campaign has taken its demands to cities and states across the country, winning legislated gains traditionally found in union contracts. Though McDonald’s is unlikely to sit down at the bargaining table anytime soon, local legislators and everyday Americans are more willing than ever to stand up.

Max Zahn is a freelance reporter in Brooklyn, New York.