A Pro-Union Case for Steel Tariffs 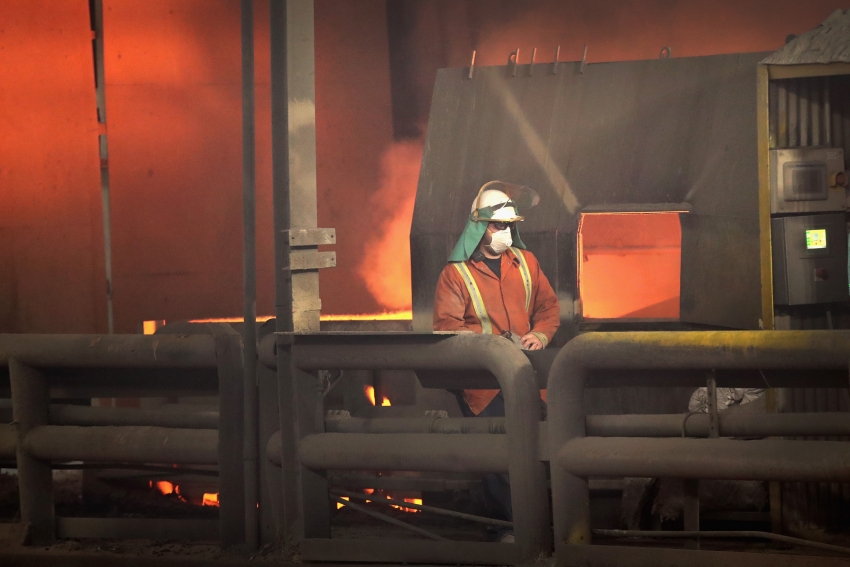 In 2016, the United States imported five times as much primary aluminum as it made. (Photo by Scott Olson/Getty Images)

House Speaker Paul Ryan claimed the moderately sized tariffs on two metals would reverse the economic boon he thinks will surely be created by the tax breaks his party gave to corporations and the rich. The good times would be over. Kaput!

This drama comes from a politician who proposed a border adjustment tax on all imports, not just two metals, that would have cost American consumers $1 trillion. This hysteria comes from corporations that use steel and aluminum and are apparently just fine with Chinese trade violations completely killing off American producers.

The U.S. Department of Commerce estimates the cost of the tariffs to the U.S. economy at $9 billion, which is a fraction of 1 percent of the nation’s GDP, and a fraction of the cost of Ryan’s border adjustment tax.

The beverage industry went crazy anyway. Coors, for example, claimed the tariffs would cost jobs across the beer industry and “American consumers will suffer.”

Here’s what Coors calls suffering: a penny price hike. There is about three cents’ worth of aluminum in a beer can. A 10 percent tariff on aluminum could increase the price of an entire six-pack of Coors by not quite two cents.

The additional cost to a new car, which contains much more steel and aluminum, would be more significant. A senior economist at Cox Automotive estimated it at $200.

But that’s only if American aluminum and steel companies raise their prices by 10 and 25 percent, respectively. They are not subject to the tariffs, so they don’t have to.

The tariff proposal wasn’t sudden or out of the blue. It came after the president announced last April that the Commerce Department would evaluate whether the damage done to the American steel and aluminum industries by bad trade practices endangered national security. Commerce told the president in January that it did. And it recommended remediation through tariffs, import limits or both.

China is massively overproducing these metals at massively subsidized mills. It then dumps its excess aluminum and steel on the world market at super-discounted prices. The United States, in conjunction with European allies and others, has repeatedly over the past decade negotiated with China to stop defying the rules it agreed to abide by when it gained entrance to the World Trade Organization in 2001. China repeatedly has said it would. And then it doesn’t.

Repeatedly, the Chinese have, instead, continued running dangerous and environmentally toxic mills and constructed new ones, further increasing overcapacity. In 2016, for example, China increased its steel-making capacity by 36.5 million tons. That is almost half the U.S. output for 2016.

This has killed American mills, thrown tens of thousands out of work and devastated mill towns. Steel employment in the United States has declined 35 percent since 2000, with 14,500 workers losing their jobs between January of 2015 and June of 2016. The plummet in aluminum employment was even steeper, with 58 percent of jobs lost between 2013 and 2016.

In 2000, 105 companies produced raw steel at 144 U.S. locations. Now, 38 companies forge at 93 locations. Over the past six years, six aluminum smelters closed permanently. Just five remain, with only two operating at full capacity. And only one of those produces the high-purity aluminum required for defense aerospace needs.

The declines in U.S. steel and aluminum production occurred despite increased domestic demand for both. In 2016, the United States imported five times as much primary aluminum as it made.

Most of the aluminum imported into the United States comes from Canada, a country that respects trade regulations and operates a market economy, just like the United States. So Trump was right to exclude Canada from the tariffs.

To see real suffering, Coors might take a look at unemployed aluminum and steel workers and their crumbling communities. U.S. Steel, Republic Steel and Century Aluminum have announced that the tariffs will enable them to reopen closed mills and rehire as many as 1,700 workers. Unlike Coors, conservative commentators and Paul Ryan, most Americans are willing to pay the extra penny per six-pack.