Arizona Teachers Are Out On the Largest Strike in State History. Here’s Why. 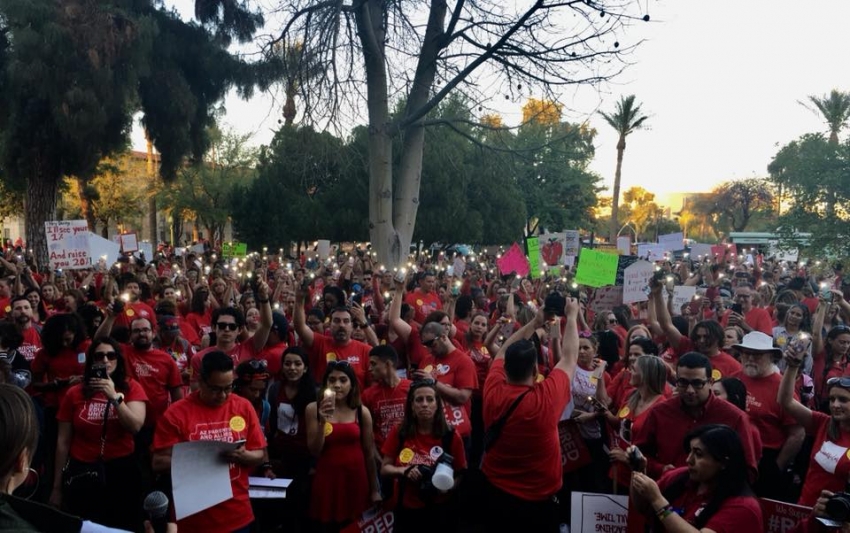 Tens of thousands of Arizona teachers are striking for higher wages and increased school funding. (Save Our Schools Arizona / Facebook)

Jen Samuels is excited. She is a teacher in the Paradise Valley School District near Phoenix, Ariz. and was up early today, although she will not be in her classroom. Today Samuels and thousands of her fellow teachers are out on strike, and up to 50,000 educators and their supporters are expected to march to the Arizona state capitol in nearly 100-degree heat.

“My minivan will be filled with teachers,” Samuels tells In These Times. “We are driving to a light rail station, taking the train to the stadium where the Arizona Diamondbacks play baseball, and then marching 1.7 miles to the capitol.”

Samuels’ husband will be following along behind her, so that her three young children can attend the march. Schools will be closed across the state in support of the walkout, with many observers believing this will become the largest teacher strike in recent history.

Over 800,000 students in both traditional public schools and charter schools and are expected to be impacted by the walkout, as their schools will likely be closed until an agreement over pay and classroom funding is reached between teachers and Arizona’s governor and legislators. So far, Republican Gov. Doug Ducey has proposed a 20 percent raise, to be gradually phased in by 2020.

Strike organizers, though, including the grassroots group Arizona Educators United, say that the 20 percent pay raise meets only one of their five demands, and effectively cuts non-licensed school staff out of the deal because only teachers’ salaries would see an increase. The teachers’ demands are available online and include a pledge that taxes not be cut in Arizona until “per-pupil spending reaches the national average.”

This message doesn’t appear to have reached Gov. Ducey, however, as he signed a tax break into law on April 25, just hours before teachers were set to strike. In a deal that could cost Arizona $12 million in annual tax revenue, Gov. Ducey signed off on a no-tax pledge designed to attract a buyer for a coal power plant on the Navajo Nation. Samuels says that, to her knowledge, Ducey has still refused to meet with educators in person and has so far only invited school superintendents to the table.

Arizona’s investment in public education—from its per-pupil spending to its teacher pay rate—is hovering near the bottom for all fifty states, according to numerous sources. This has led to an education crisis that has been exacerbated by Arizona’s nearly boundless pursuit of school choice schemes—including school vouchers—that have helped steer money away from public school districts.

In August, 2017, Gov. Ducey signed a massive expansion of the state’s voucher program into law, signaling his support for the use of public funds for private schools. Moves like this, critics allege, have helped land Arizona where it is today, with thousands of educators and their supporters donning red, the chosen color of their Red for Ed campaign, and rallying at the state capitol.

For Anne Ellsworth, a parent and Episcopal priest based in Tempe, it was the 2017 voucher expansion bill that led her to get involved in the fight for Arizona’s public schools. The bill was originally proposed by Republican state legislator Debbie Lesko who claimed that diverting public money to private schools would “save taxpayer money.” In response, Ellsworth became part of a grassroots, pro-public school group called Save Our Schools, and hasn’t looked back since.

Save Our Schools just won the right to have an anti-voucher expansion referendum placed on the November ballot in Arizona. For Ellsworth, this is all about the people of Arizona rising up to express their collective support for the state’s public schools.

“I am coming at this as a parent who cares deeply not only for my own children, but for all the children that attend Arizona schools,” Ellsworth says. But there’s more. “As a priest, I believe our budgets are moral documents. I believe clergy need to be vocal about having our legislators pass legislation that cares for our sick and our poor.”

What Arizona needs, Ellsworth insists, is not a short term fix like the one she says Gov. Ducey has offered, but instead new revenue streams dedicated to supporting schools, students and educators. “Arizona gives away approximately $14 billion in tax exemptions, and our state brings $9.8 billion into our general fund. The general fund money is how we pay for our schools, but we are giving away more than we are collecting, through corporate tax credits and exemptions.”

Don’t let anyone ever tell you there is no money in Arizona, Ellsworth says. Instead, what she sees is a governor beholden to outside money from groups such as Americans for Prosperity (funded by the Koch Brothers) and the American Federation for Children, a pro-voucher group affiliated with Education Secretary Betsy Devos.

“There is no respect for the will of the people right now,” Ellsworth argues, noting that she first requested a meeting with Gov. Ducey last year and never received a response. Today, she will be at the capitol with her children. As she reflects on what’s happening, Ellsworth frames the Arizona walkout as a desperate measure for public school advocates from across the state. “This is truly the last straw,” she says. “All possible channels of communication have been exhausted.”