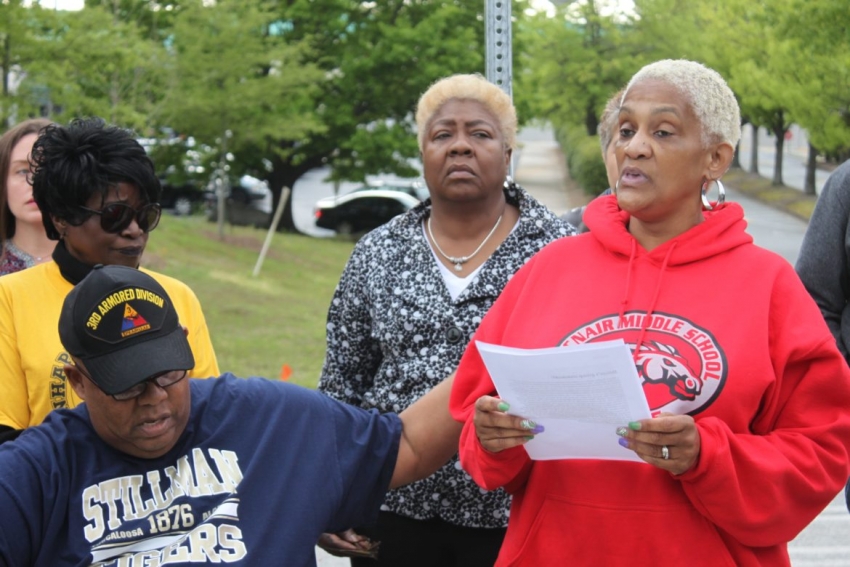 Robbie Brown loved her students. For 18 years, she drove them in her yellow bus to and from schools in DeKalb County, Georgia. And then, last Friday, two police officers showed up at Brown’s house with a letter. She’d been fired.

Brown is one of at least seven drivers sacked after staging a “sickout” to demand better pay and benefits. Last Thursday, nearly 400 school bus drivers and monitors in DeKalb County called in sick, aiming to pressure school district officials to boost driver pay, improve retirement packages and reclassify drivers from part-time to full-time employees. The drivers have 50 demands in all. Some paint a picture of a bus system in disrepair: Drivers say they need restrooms at parking lots, working intercom systems, air conditioning on buses. Other demands, like “fair treatment for bus drivers,” tell a story of workers who are tired of being pushed around.

While district officials say they fired “ringleaders,” drivers say plans for the sickout emerged informally, and spread by word of mouth. Drivers in DeKalb, which covers part of Atlanta, are not unionized, and as public employees in Georgia, they’re barred from collective bargaining and striking. But Brown, who’s 51, felt like she had to speak out.

"My mortgage is $1,000 a month, and there’s no way, even if I retire in 20 or 30 years, that I can afford to keep my home,” she told Scalawag Magazine. Brown’s retirement plan would net her only about $400 a month after she stopped working, she says. Many of her colleagues work well into their 70s just to keep the lights on.

“Once we get old enough to retire, we can’t pay the bills.”

The sickout, which continued through Monday, comes after months of meetings in which drivers voiced concerns over benefits and pay to district officials. And it follows waves of wildcat strikes by public school teachers across the South and West who are demanding better treatment and pay. It’s too early to tell what effect the DeKalb sickout will have, but supporters hope it will add fuel to a resurgent labor movement in public education. Closer to home, Brown hopes the action will pressure district officials to meet drivers’ demands, and perhaps provoke teachers, custodians and other workers in Georgia schools to fight for better pay, benefits and working conditions.

“They need to stand up,” Brown said. “If you stand together, if you make a chain link with your hands and hold on, it can be done.”

“We don’t even have the word strike in our vocabulary here because there is no reason for our membership to strike,” Turner said. “Our plan is to continue to organize as issues come about … I hope all workers can get organized with an organization that they control and can run democratically.”

In DeKalb County, employment incentives discourage teachers from organizing, according to a teacher in the district. She spoke on the condition of anonymity, citing concerns about retaliation. Some teachers are complacent, she said. And because enough teachers want to leave the classroom for the administrative ranks, where they can expect much higher salaries, it’s difficult to whip up support for collective protest, the teacher, who is a member of the Georgia Association of Educators, explained.

“The way the system has been created, it incentivizes keeping your head down and following the rules,” she said, adding that “there’s no indication of a walkout, a sickout, or a protest.”

Yet strikes in West Virginia and Oklahoma have shown that teachers in states hostile to organized labor, and battered by funding cuts, can win material gains through collective protest. It’s worth remembering that the teacher strikes began in only a handful of counties in southern West Virginia, weeks before there was public chatter about a state-wide work stoppage. Even though the driver sickout only affected one Georgia county, 42 percent of DeKalb’s drivers refused to work last Thursday. If drivers win some of the improvements they’re asking for, it could be an early sign that drivers, custodians and other non-teacher staff can use direct action to successfully push for better labor conditions in the right-to-work south.

It’ll be a tough fight, though. While a DeKalb spokesperson told Scalawag that district officials have been developing a timeline for addressing driver concerns, the DeKalb County Superintendent condemned the sickout last week, saying the action put students in danger. "This is not acceptable and it will not be tolerated," Superintendent Stephen Green told reporters at a press conference last Thursday, saying they will now require doctors’ notes from drivers who call in sick. "Your actions will have consequences and there will be repercussions for putting our children in harm’s way.”

For Brown, who has three children of her own, the suggestion that drivers would intentionally endanger their students is “totally ridiculous.” “I love my kids, I know all my kids’ names,” she said. She’s sad to think she might not see them again. “That’s the biggest regret I have -- that I didn’t have the chance to say goodbye to them."

Drivers have been raising concerns about pay and conditions for over two years. In recent months, a committee of drivers and bus monitors met regularly with district higher-ups, and drivers flooded recent DeKalb County Board of Education meetings with questions and complaints. On April 17, two days before the sickout, drivers met with Superintendent Green to discuss their demands. When drivers didn’t get concessions they’d asked for, they informed district officials about a planned sickout, giving them time to alert parents about possible delays. The district’s decision to subsequently fire alleged “ringleaders” prompted drivers to seek assistance from outside organizations, including Atlanta’s General Defense Committee, which is affiliated with the Industrial Workers of the World, a labor union.

On Thursday, fired drivers held a press conference calling on Superintendent Green to rehire Brown and her colleagues. They were joined by still-employed drivers, parents of DeKalb students, and members of supportive organizations.

Melanie Douglas, a fired driver, censured Superintendent Green for behaving contrary to what DeKalb schools teach students about the importance of free speech. "The message is if you speak up about injustice, if you use your First Amendment rights, then we will strike you down," she said.

A district spokesperson told Scalawag Superintendent Green has no plans to rehire fired drivers, but did meet with members of the Driver and Monitor and Advisory Committee on Thursday. “The district has been open, is open, and will continue to be open to sitting down and thinking about issues and how to solve them,” the spokesperson added.

But during the press conference, Douglas said the superintendent was trying to “sow division between the fired and still-employed drivers.” Another fired driver, Marion Payne, said he wasn’t confident the Driver and Monitor and Advisory Committee would advocate for rehiring drivers. “They’re afraid to death. They might not say anything,” he said.

A current driver, who asked to remain anonymous, expressed that retaliation has not entirely chilled their efforts. He said drivers may yet resolve to take further action if their demands are not met.

Drivers are also consulting with lawyers about possibly contesting the terminations in court, according to Sara Khaled, a community organizer working with the drivers. “But we’re hoping we can resolve this outside the court to get the drivers hired again and get some of their original demands met,” they added.

Whatever comes of it, the sickout is history-making. It’s the first work stoppage by school bus drivers in Atlanta since 1980, when drivers shut down schools in Fulton County. And it comes on the heels of several successful organizing efforts by bus drivers elsewhere. In February, Seattle school bus drivers staged a week-long strike, forcing management to expand benefit packages and provide comprehensive healthcare coverage. Also in February, city transit workers in Atlanta went on strike to protest unfair labor practices, ultimately prompting their employer to agree to improvements in their contract. (Crucially, drivers in DeKalb insist that their action was not a strike.)

Meanwhile, Brown’s future remains uncertain. “I am applying for jobs,” she said, a little wistfully. “My license is a Class A, and I’m thinking of driving trucks, even though I love my kids and I loved my eighteen years.”

Casey Williams is a freelance writer based in Durham, NC. He covers issues from environmental justice to southern culture to labor and the Left in the South, and has published work in The New York Times, The Nation, HuffPost, and other local and national outlets.