Why These Immigrants Are Shutting Their City Down This May Day 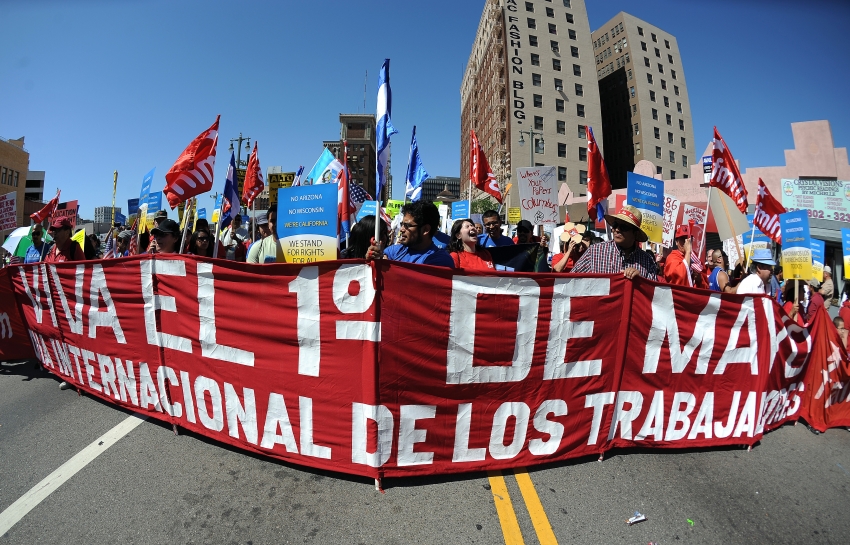 Welcome to Interviews for Resistance. We’re now into the second year of the Trump administration, and the last year has been filled with ups and downs, important victories, successful holding campaigns, and painful defeats. We’ve learned a lot, but there is always more to learn, more to be done. In this now-weekly series, we talk with organizers, agitators, and educators, not only about how to resist, but how to build a better world.

As May Day comes around again, once again immigrant workers take to the streets in protest of continued criminalization. Having defeated the 287g program, which makes local law enforcement into an arm of immigration enforcement, in Milwaukee, Voces De La Frontera and other organizations have called for a "Day Without Latinxs & Immigrants" strike action to halt the program in Waukesha. Gabriel Quintero is a member of Voces and spoke to me about the day, the departure of Paul Ryan, and their organizing under the Trump administration.

Sarah Jaffe: We are talking on Monday. Tomorrow is Tuesday. It is May Day and where you live, it is going to be another Day Without an Immigrant, right?

GQ: That is correct.

SJ: Tell us about what is going on in Waukesha and in Wisconsin this year.

GQ: In the past, our sheriff in Waukesha County, he wanted to participate in the program called 287g, which would allow the sheriff’s department to act an immigration enforcement agent. This program has been known for not… What can I say? The purpose is not what the people wanted. We all hear about Sheriff Arpaio in Maricopa County, which is in Arizona, he was using that program to intimidate and put all our community, immigrant community, and pretty much base[ing] it on your race. It was People were afraid of these programs because you can be racially profiled. People being pulled over just for the color of their skin and to be questioned about their status. So, this is not a good program for our community and, in general, the public.

SJ: You have been fighting about this in Wisconsin for a while, right?

GQ: Yes. We fought this battle before with Sheriff Clarke in Milwaukee and we won the battle. He was trying to use the program in the Milwaukee area and thanks to Voces De La Frontera and the actions of all the people together, we defeated this program in Milwaukee. Now, we’re trying to do the same thing in Waukesha.

SJ: Tell us about what is planned for May Day, then?

GQ: May Day is a day of actions. We are going to march and we are going to raise our voices and tell Sheriff Severson we don’t want this program in Waukesha County. We plan to make our rally march around our local library to the courthouse. We have got a program with speakers from our community and leaders, in general.

SJ: What has it been like day to day in Waukesha for the last couple of years since Trump has been in office?

GQ: Since the new administration, a lot of things changed, not for good in Waukesha County. They see immigrants as a problem for the community, which is not true. We are here to support, not just the city of Waukesha, but the whole state. We pay taxes. We are proud homeowners, like in my case. We all want to be part of the community and not be portrayed as criminals, which we are not.

SJ: What kind of organizing have you been doing to build up towards May Day? Tell us what has been going on in Waukesha for the last few months.

GQ: We have been asking our local authorities to be on our side, telling Sheriff Severson that this program is not right for our community. Fortunately, our local police department, they gave us a statement, they say they are not going to participate in this 287g program, which was a great victory for us. But, we have still got to address the sheriff’s department and let them know that we are not going to agree to participate in this program. We have been making a lot of phone calls directly to his office. We are trying to get most of the local businesses to support us, so they’re going to close tomorrow to show our power, our economic power.

SJ: In the other part of the state in Wisconsin, Paul Ryan, who has been the Speaker of the House, is now stepping down. Looking forward to this election year, what does it feel like in Wisconsin?

SJ: What else should people know about immigrant worker organizing in Wisconsin?

GQ: We have been trying really hard to push an agenda which allows to give people a driver’s license, back because we know this is a safety issue for everybody. It is not the right thing to have people driving without licenses. We have been pushing through our local elected officials and we are optimistic that we are going to get a bill at some point to pass driver’s license for undocumented immigrants.

SJ: How do you feel about the immigrant rights movement under Trump as a whole? Do you feel like it is strong?

GQ: We have been pushing really hard, especially with the DREAM Act and we have been trying to address these problems locally. But, yes, since the new administration, we have been under attack pretty much all the time. We have got to step up and raise our voices. This is not America. America is a country of immigrants. Diversity does make this country the best country in the world.

SJ: How can people keep up with you and with Voces?

GQ: We got a lot of good new tools since the first march in 2006. Now, people are more involved. We have social media which has been a great tool for us. We are communicating and we have been organizing a lot better. We got a lot of new chapters in Wisconsin for Voces De La Frontera. We will expand our voice. We got a new office which is open in Green Bay and we plan to open our own office here in the city of Waukesha. So, people have been very involved and I think we have got a good movement going now.

Interviews for Resistance is a project of Sarah Jaffe, with assistance from Laura Feuillebois and support from the Nation Institute. It is also available as a podcast on iTunes. Not to be  reprinted without permission.