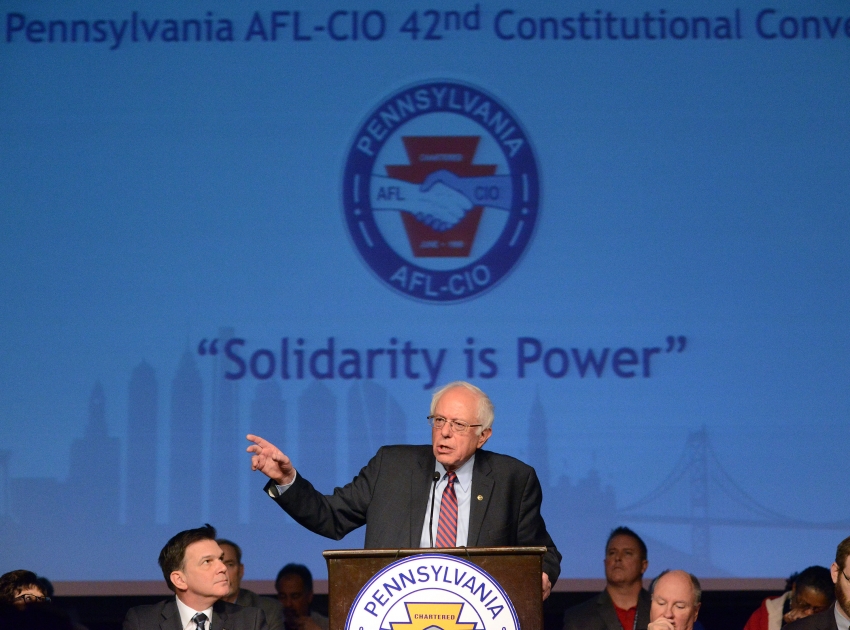 The fight to expand democratic control over the workplace just received a major shot in the arm.

Today, Sen. Bernie Sanders (I-Vt.) introduced sweeping legislation that would dramatically expand labor rights, making it easier for workers to join unions, speed up contract negotiations, roll back “right to work” laws and clamp down on union-busting tactics by employers.

The legislation, known as the Workplace Democracy Act (WDA), is being co-sponsored by Sens. Elizabeth Warren (D-Mass.), Kirsten Gillibrand (D-N.Y.), Tammy Baldwin (D-Wisc.) and Sherrod Brown (D-Ohio) and has been endorsed by more than a dozen major unions and labor groups.

At an event on Wednesday announcing the legislation, Sanders said: “If we are serious about reducing income and wealth inequality and rebuilding the middle class, we have got to substantially increase the number of union jobs in this country.”

If passed, the legislation would redistribute power on the job to vastly benefit workers over their employers. And it would do so by extending democracy to the place Americans spend much of their waking lives.

In the United States, the concept of democracy generally conjures images of voting booths and candidate forums. But every time workers come together to advocate their interests and challenge concentrated power, they are practicing democracy. In daily life, one of the most important—and universal—arenas for this form of democratic action is the workplace.

Corporations and employers hold enormous power over workers, dictating which hours of the day they’re at work, what they’re allowed to say on the clock, what they wear and when they can go to the bathroom. Employers also determine workers’ wages as well as the type of healthcare they receive (if any)—all with the dangling threat of losing their job if at any time a boss decides they are expendable.

This slanted power dynamic is what allows employers to keep workers compliant even under abhorrent conditions. And it is why the role of labor unions—the primary vehicle for advancing democracy in the workplace—is absolutely critical to protecting workers’ rights at a time of unchecked corporate power.

The WDA would simplify the process of unionization by allowing the National Labor Relations Board (NLRB) to certify a union if a majority of eligible workers say they want to join. That process, commonly called “card check,” would eliminate union elections and give workers a clearer pathway to organizing their workplaces.

As it currently stands, employers have wide-ranging power to influence and intimidate workers into voting against unionization. They commonly force employees to attend anti-union meetings and threaten workers involved in organizing campaigns. The WDA would curb this type of behavior and create a more level playing field during union drives.

Labor advocates believe such reform is critical to giving workers a stronger voice on the job. In an interview with In These Times, David Johnson, National Field Director for the National Nurses United (NNU)—which has endorsed the legislation—says the WDA “is an important step forward in restoring what should be worker’s constitutional rights to engage in concerted activity to freely associate and to form strong unions to advocate for themselves and, in the case of registered nurses, to advocate for their patients as well.”

The legislation would also repeal section 14(b) of the 1947 Taft-Hartley Act, which has allowed 28 states to pass laws restricting the ability of unions to collect dues from members who benefit from collective bargaining agreements. Such “right to work” laws have weakened unions in these states and led to lower overall pay for workers.

Under the WDA, employers would also be required to enter into contract negotiations within 10 days of a new union being formed. A full 37 percent of new unions go without a first contract for at least two years because of employers dragging their heels on negotiations. Such practices would be ended by this legislation.

As Sanders explained when introducing the bill: "Corporate America understands that when workers become organized, when workers are able to engage in collective bargaining, they end up with far better wages and benefits... and that is why, for decades now, there has been a concentrated well-organized attack on the ability of workers to organize.”

The push for the WDA—a version of which was originally introduced in 2015—comes on the heels of an announcement that Sanders’ office will soon propose a federal jobs guarantee. While the specifics have not yet been revealed, at its core such a program would seek to create a system of full employment in the United States, offering a job paying $15 an hour to any worker who wants one.

Once enacted, such a plan would have the potential to fundamentally shift the relationship of workers to their employers. If a job were always available through the government, workers would no longer live under the constant threat of losing their livelihood whenever their boss decides they are no longer needed. By setting a floor with a living wage, this form of a jobs guarantee would likely lift up the pay and benefits of workers everywhere, and open the space for more union activity in the private sector.

The combination of the WDA and a jobs guarantee, taken together with proposals for instituting Medicare for all, a federal $15 minimum wage and paid family leave, represents a barrage of progressive changes to the U.S. economy that would lift millions out of poverty and bring more democracy into workers’ daily lives.

Other senators have also recently voiced support for a version of a jobs guarantee, including Gillibrand and Cory Booker (D-N.J.). And the demand is not new in American politics: Dr. Martin Luther King Jr. famously fought for full employment as a means to end poverty and advance the cause of racial justice.

King was a staunch supporter of union rights throughout his life. In 1965, he gave a speech to the state convention of the Illinois AFL-CIO in which he called the labor movement “the principal force that transforme­d misery and despair into hope and progress.” King’s last major campaign before he was assassinated in April, 1968 involved joining with striking sanitation workers in Memphis, Tenn. to win justice and dignity on the job.

In 2018, 50 years after King’s death, the U.S. labor movement is facing monumental threats. The Supreme Court will soon rule on Janus vs. AFSCME, a case that is poised to deal a severe blow to public-sector unions. President Trump is overseeing a massive rollback of workers’ rights and stacking the National Labor Relations Board (NLRB) with appointees who are outwardly hostile to unions.

Corporate entities such as the American Legislative Exchange Council (ALEC) have engaged in a decades-long campaign to weaken the power of labor, and today unionization rates in the United States stand at among their lowest levels in generations.

As NNU’s Johnson says, “I think we should be clear: There is a relative handful of incredibly wealthy, powerful mostly white men who are standing in the way of working people having the kind of country we deserve, where people have rights and they have decent wages and a decent community and a safe and healthy workplace, and education and healthcare as human rights.”

However, there are also signs of hope.

In states across the country, from West Virginia to Oklahoma, Arizona and Colorado, teachers have waged statewide strikes to win higher pay and better working conditions. Rank-and-file caucuses are helping to transform their unions into more militant organizations, willing to take dramatic action to defend members and stand up to attacks.

Workers in a diverse array of industries, from media to universities, logistics and tech, are launching new union drives. And over the past two years, workers under the age of 35 have led an unprecedented surge in union membership, and are much more likely to view unions positively. Overall, labor unions are now viewed more favorably by the public than they have been in well over a decade.

At a time of staggering economic inequality, when corporate profits are soaring while the safety net is shredded and working people are forced to scramble over crumbs, the renewed interest in labor unions is a sign that Americans are coming to see collective action as the best way to improve their living conditions and wrest workplace power from profit-obsessed employers.

While the WDA may be a dead letter under Trump and the GOP Congress, it does plant a flag for how a more democratic economy could be structured. And with a potential political sea change on the way in coming election cycles, this type of bold proposal sets the contours for what progressive politicians and activists alike can demand.

As workers are proving across the country, winning a better standard of living is possible, but it can only come about through demanding—and practicing—democracy on the job.