From The Women’s March to The Poor People’s Campaign, A Call for Economic Human Rights 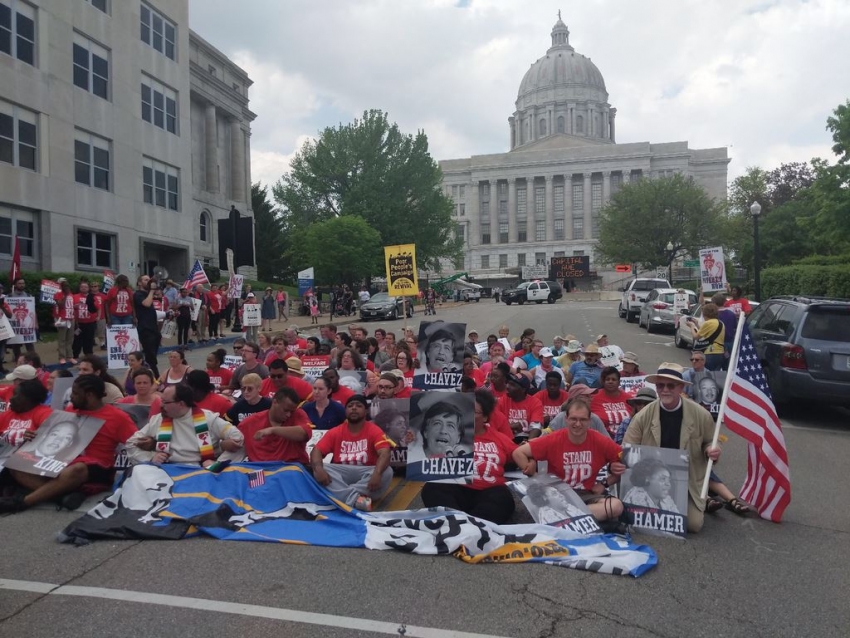 Teachers in Kentucky marching for health care and students organizing against the school to prison pipeline have a core value in common: They are fighting for human rights. Yet, an elite framing of human rights has consistently ignored the people on the frontlines. This week, a new Poor People’s Campaign is engaging in direct action in communities across the United States for the rights to housing, education, healthcare, decent jobs and more. It’s time to recognize that these grassroots struggles for a social safety net and a decent standard of living add up to a larger and meaningful demand for a society that recognizes the human rights and dignity of everyone.

Yale professor Samuel Moyn recently wrote in The New York Times that human rights “movements” have failed because they have been limited to efforts to “name and shame” and have not tackled economic inequality. But, he appears to recognize only elite international non-governmental organizations (NGOs) as human rights actors. This omission fuels the manufactured and false narrative that human rights ideas belong only to the professional class.

The notion that every human being is deserving of a broad set of fundamental rights is a moral concept that has been embraced by rising movements. The values and principles document for the Women’s March affirms, “We believe that Women’s Rights are Human Rights and Human Rights are Women’s Rights,” and later states, “We believe in an economy powered by transparency, accountability, security and equity.” These are integrally connected for leading-edge social justice movements in the United States.

Effective human rights movements are not aimed at merely naming and shaming. They build power. The Fair Food Movement in the United States is spearheaded by the farmworkers of the Coalition of Immokalee Workers (CIW)—a self-described human rights organization that defines its vision using the Universal Declaration of Human Rights. The CIW has been the only worker organization to bring 14 major transnational corporations to the table through massive consumer campaigns that led to legally binding agreements transforming conditions in their supply chain.

Human rights movements today are led not by professionalized NGOs, but by those most affected by injustice. The powerful Dignity in Schools Campaign, with a presence in 27 states with upwards of 120 member organizations, has been a formidable force in working to end the school-to-prison pipeline. This coalition, democratically led by a majority of parent and youth groups and anchored at the National Economic and Social Rights Initiative, also embraces human rights as a core part of its vision and describe itself as connected to “broader movements for social justice and human rights.”

There are equally impressive state-level efforts that form the foundation of our human rights movement. Examples include Vermont, where Rights and Democracy and the Vermont Workers’ Center have been calling for healthcare as a human right and inching ever closer towards a universal healthcare victory. The Border Network for Human Rights has thousands of members fighting for the safety and peace of border communities under a broader human rights vision.

This week marks the revival of Reverend Dr. Martin Luther King, Jr.’s Poor People’s Campaign, through the work of Reverend William Barber and Reverend Dr. Liz Theoharisat the Poverty Initiative, housed at Union Theological Seminary. Like its predecessor, the “Poor People’s Campaign: A National Call for Moral Revival” embraces a moral vision of human rights explicitly focused on economic and social rights. It has galvanized thousands of people in 39 states, with a statement of principles that recognizes, “Given the abundance that exists in this country and the fundamental dignity inherent to all humanity, every person in the United States has the right to dignified jobs and living wages, housing, education, healthcare, welfare, decent and dignified jobs and the right to organize for the realization of these rights.”

The Universal Declaration of Human Rights embraces the full range of economic and social rights: education, healthcare, a decent standard of living and more. Yet, Moyn also implies that not everyone needs human rights, and that they are only necessary for “vulnerable minorities.” Human rights values do compel us to put the most marginalized communities at the center of social change, but these movements have always done so while fighting for a better world for all. And everyone needs the systems and structures that ensure economic and social rights. An equitable but universal vision is central to human rights movements.

People’s movements—from civil rights, economic justice, women’s rights and gender justice, LGBTQ rights, immigrant rights, racial justice and more—are where human rights movements emerge. And when these movements call for a human rights vision, grounded in a moral framework that centers our humanity, elites make every effort to erase the message. As a result, not many people today in the United States think of human rights in connection with our domestic fight for social justice. This is not an accident, but a direct result of a repressive political history.

As Carol Anderson documents skillfully in her prize-winning book Eyes off the Prize, when the Civil Rights Movement embraced human rights, in particular economic and social rights, it was attacked by elite allies and had to tactically narrow its vision publicly. But moral leaders from Reverends King to Barber have always based their struggles in universal human rights, and seeing that connection will help us to build towards the larger vision we need to meet the very serious challenges of our time.

Cathy Albisa is co-founder and executive director of National Economic and Social Rights Initiative. She is committed to a community-centered and participatory human rights approach that is locally anchored, but universal and global in its vision. She has served on boards of the Center for Constitutional Rights, the National Latina Institute for Reproductive Health, the International Economic, Social and Cultural Rights Network, and the Center for Social Inclusion, among others. This month, her organization will be launching A New Social Contract: Collective Solutions Built by and for Communities.