Why 50,000 Las Vegas Workers Are on the Verge of Striking 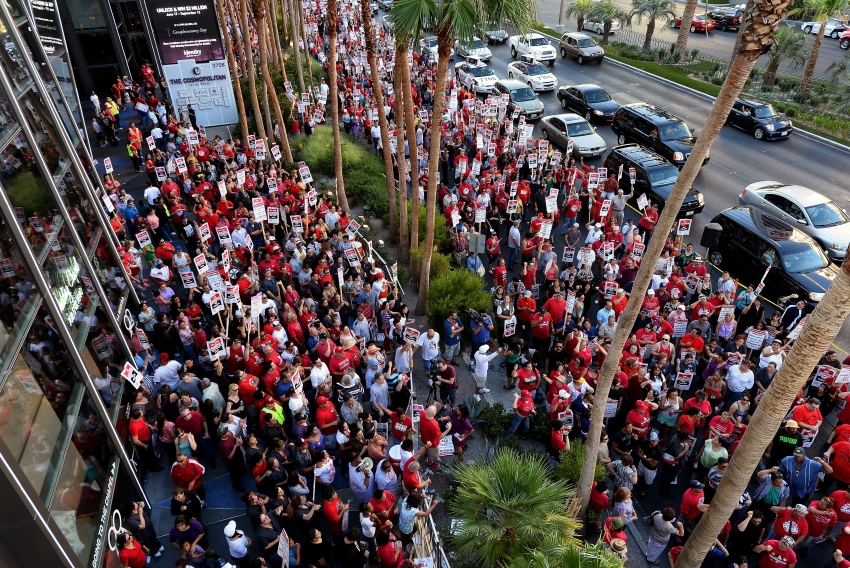 Workers are already making preparations for a strike. (Getty Images)

Over the next two weeks, Las Vegas will see an even larger influx of tourists than usual as the city hosts the Stanley Cup hockey finals, with the Las Vegas Golden Knights facing off against the Washington Capitals. But these visitors could soon find themselves in a city where most of the services are shut down.

On May 22, UNITE HERE’s Culinary and Bartenders Unions, which represent over 57,000 hospitality workers in Las Vegas and Reno, held a strike authorization vote. Of the 25,000 members who participated, 99 percent voted to authorize a strike if a new contract isn’t signed by June 1. If the strike takes place, 50,000 employees at 34 casino resorts in Las Vegas—including most of the wait staff, bartenders, kitchen workers, and hotel employees who work on the strip—will walk off the job. It would be the first citywide strike since 1984, when thousands of Culinary Union members went on strike for 67 days. A citywide strike vote hasn’t taken place since 2002, even though the unions renegotiate contracts every four years.

Such a strike could have an enormous impact. UNITE HERE Gaming Research, the unions’ research arm, projected that a one-month strike could cost MGM Resorts and Caesars Entertainment, the two largest employers on the strip, more than $300 million.

Sara Enciso, who has worked setting up banquet halls at Mandalay Bay Resort and Casino for about two and half years, voted in favor of the strike. “I don’t expect to go on strike, I don’t want to go on strike. But that is what it takes for them to understand that we need better conditions,” she said. “We’re an important part of their company… We are the ones that put [in] the labor and we are the ones that give them all the money they are making.”

While a strike could hurt her family’s finances, failing to get the workers’ demands met will, too. “We don’t want to be worried about where my check is [coming] from,” she said. “We want to make sure we have a job to go to, work to do every day.”

One issue workers have raised beyond increased pay and benefits is to ensure better job security in the face of new technologies and changes in the industry. They want companies to guarantee that even if a casino is sold to a different owner, the employees will remain represented by their unions and covered by their contracts. They also want the unions to have a formal role in the adoption and implementation of new technologies, including providing new job opportunities and training for workers.

Another demand is to give casino staff, particularly the housekeepers who clean hotel rooms, safety buttons that they could press if they find themselves in an unsafe situation. Pressing the button would alert security, sending out a worker’s location. Safety “is a really, really big issue,” said Bethany Khan, director of communications at UNITE HERE Culinary Workers Union Local 226. “After the #MeToo movement…we think it was a good proposal.” Chicago and Seattle recently passed laws requiring similar buttons for hotel housekeepers as a way to combat sexual harassment and assault, and unionized housekeepers in New Jersey and New York City all receive them. The buttons address a widespread problem: in a survey of Chicago hotel workers, 58 percent said they had been sexually harassed by a guest, including guests opening the door naked or touching workers inappropriately.

Workers are also addressing immigration in their negotiations. A majority of the unions’ members are immigrants, but for some, their legal statuses are up in the air after the Trump administration ended the Deferred Action for Childhood Arrivals program and Temporary Protected Status for hundreds of thousands of immigrants.

The companies have already agreed to give employees time off to gather and submit any necessary paperwork, and negotiations are still underway to have employers let workers return to their jobs if their immigration statuses are disrupted by the administration but later restored by Congress or another president. But even with the tentative agreement, Khan noted, nothing is set in stone until a contract is signed.

Workers also argue that after the Republican tax bill cut the corporate tax rate, and many of their employers have announced billions of dollars in stock buybacks to benefit shareholders, workers should share in the spoils. “Workers are the largest and most important part of their shareholders,” Khan said. “Workers have worked with them through the Great Recession to make sure their business was open and profitable, we [forewent] raises…and we’re saying you’re making record profits and workers shouldn't be left behind.” The unions have proposed average raises of four percent a year for the five-year contract, but the companies have countered with 2.7 percent.

While they stress that they’d prefer to come to an agreement before June 1, workers are already making preparations for a strike: assigning picket shifts, making signs, and distributing information about strike pay and benefits, as well as economic resources for those who may need them while off the job.

“We want corporations to understand that we’re doing our jobs, and we want them to do their jobs also,” Enciso said. “If we give excellent customer service, the guests keep coming to Las Vegas.”