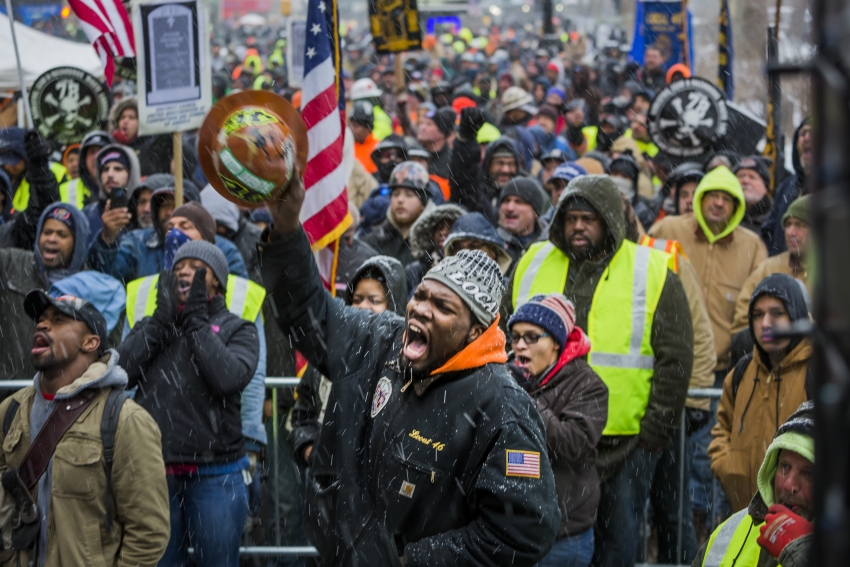 Over 30,000 members of New York City's Building Trades walked off their jobs, to rally outside of City Hall, calling for better safety legislation. (Photo by Michael Nigro/Pacific Press/LightRocket via Getty Images)

In a major decision that will impact labor for decades, the U.S. Supreme Court has just declared that all public-sector workers who are represented by a union have a Constitutional right to pay the union nothing for the representation.

The Court overturned its landmark 1977 decision in Abood v. Detroit Board of Education, which permitted public-sector unions to charge fair-share fees that covered the costs of providing collective bargaining and contract administration to non-members that were represented by the union. Today, in Janus v. AFSCME, the Supreme Court has held that the First Amendment prohibits public employee unions from charging a mandatory fee for the costs of representation. Therefore, going forward, all public-sector employees will be under so-called “right to work,” the union-busting legal framework that denies unions the ability to charge workers dues. In some ways, the decision is worse than expected. The ruling also makes union membership opt-in rather than opt-out. This will significantly increase the costs and burdens on labor.

This decision will directly and indirectly impact how unions are structured, how they engage with their members and objectors, how they organize and educate and how they are funded. But this decision will not destroy, defund or decimate labor.

First off, the Janus decision will only directly impact less than half of the labor movement. This is because the ruling only applies to public-sector workers: federal, state and local government employees. However, federal employees (including postal employees) have long been under so-called “right to work,” so Janus will have minimal direct impact on them. Furthermore, many state and local public-sector workers are already in “right to work” states, so this ruling will have no effect on them. This is not to say that the whole labor movement will not be negatively impacted by a decline in membership among public-sector unions, but it is important to remember that Janus will not place all union members under “right to work.”

It is difficult to predict what effect Janus will have on union membership overall. There is a good chance there will be at least some decline in membership, thanks to the free-rider problem: the likelihood of some workers who are not opposed to the union choosing to pay nothing simply because they can get something for nothing. However, state-level data on the decline of union membership following the passage of state “right to work” laws is not necessarily a good predictor of what will happen after Janus, because most of the state laws are a mixture of anti-worker laws that include “right to work.” For example, in Wisconsin, union membership declined 38 percent  between 2010 (the year prior to the passage of Act 10) and 2016. However, Act 10 contained a host of other provisions, such as the elimination of collective bargaining for public-sector workers.

Following Janus, unions will now have to fight for every union member to ensure they choose to remain members and pay their dues. Right-wing groups of the sort that brought Janus, Friedrichs and other anti-union cases, will mount a nationwide campaign to get members to quit the union. Many labor unions that have not been strong in engaging their membership will have to keep up a constant level of contact and organization to maintain their memberships or risk losing big. They will have to make the case to members why they should stay with the union and pay dues, and they will have to make that case often.

Unions are considering a number of options for getting state laws changed, or changing internal policy, to adjust to Janus. New York passed a law in anticipation of Janus, which other states are considering, that would allow unions to deny or charge for some services, such as grievance representation. Some states are considering laws that would require workers who are not members of the union to pay for representation in grievance procedures. This approach would have the benefit of discouraging free-ridership by not providing the full benefits of membership to those workers who choose not to join. However, it carries the danger of turning unions into pay-for-service organizations that will find themselves turning away workers in their time of need.

Labor law professor Samuel Estreicher has proposed an interesting approach that unions could take that would reduce the rate of possible free-riders, not require legislation, and not require unions to turn away non-paying workers. Estreicher argues that unions should require workers who choose not to pay their union dues to instead donate the money to a 501(c)(3) charity. Unions already permit religious objectors to take this route, and Estreicher suggests expanding the program to any objectors. Since this approach would require all workers to pay an amount equivalent to their dues—but would let them decide if the recipient was the union representing them or a charity—it would separate the true objectors from the free-riders.

The allowance of fair-share fees, in both the public and private sector, was in part intended to promote labor peace, and the imposition of “right to work” may lead to more strikes and labor unrest. The massive teacher strikes this year in West Virginia, Kentucky, Oklahoma, Arizona, Colorado and North Carolina have all taken place in “right to work” states, and this common fact was likely no coincidence. Workers in “right to work” states tend to have lower salaries and fewer benefits. Meanwhile, unions are weaker, possibly because they serve as a moderating force to avoid direct—and often illegal—confrontation. These effects from “right to work” can create an environment where workers’ frustration grows, they have few options to better their situations without direct action, and they organize at a grass-roots level. After Janus, with “right to work” becoming the new rule for all public-sector workers, there may be a break from a long period of U.S. history when strikes have been rare.