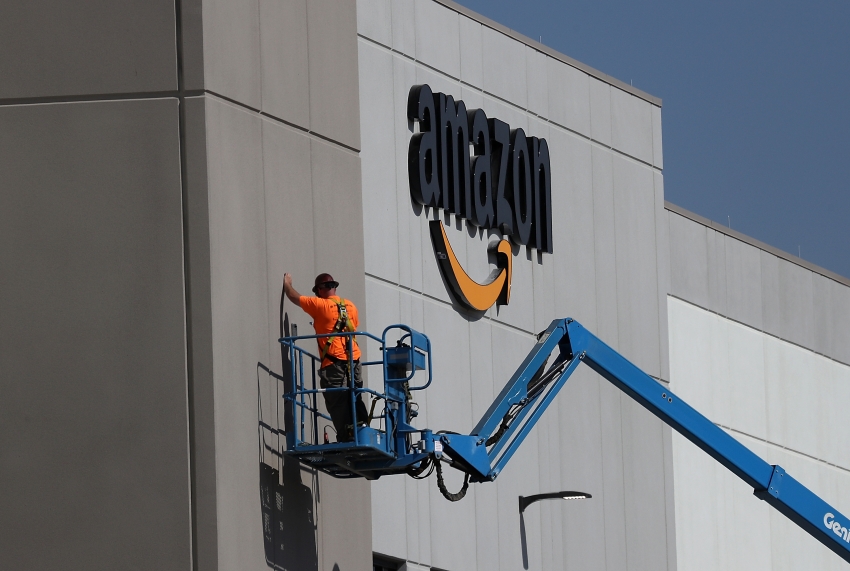 A worker makes repairs to a wall at a new Amazon fulfillment center on August 10, 2017 in Sacramento, California. (Photo by Justin Sullivan/Getty Images)

On June 20, the Partnership for Working Families, a national network of advocacy organizations, announced the launch of a brand new campaign dubbed “We Make This City.” It consists of 10 cities—Atlanta, Boston, Denver, Los Angeles, New York, Oakland, Pittsburgh, San Diego, San Jose and Seattle—fighting for access to and a say over public infrastructure, from transit to housing to schools to water.

“It is a reaction to … the erosion of the public sector, the erosion of public goods and the erosion of regular people having a direct say in shaping the futures of the areas in which they live,” Partnership for Working Families deputy director Lauren Jacobs told In These Times. It’s also in opposition to “the rise in corporations having an outsized role in shaping the direction and future of cities," she said.

There’s increased urgency as technology behemoths hold sway over cities, from Amazon’s beauty pageant for its second headquarters to its defeat of a new tax in Seattle. “Companies like Amazon or Google come in and want to try to drive decisions around the makeup and nature of the city,” Jacobs said. “We don’t show up to somebody’s house and say, ‘Well unless you remodel the bedroom or put in the finest linens and have breakfast for me I’m going to wreck your front yard.’”

We Make This City is “a campaign but also an agenda,” Jacobs added. The message is: “We have enough,” she said. “The other side often talks as though we don't have enough money… We want to expose that, actually, we do have enough money in cities and metro regions. [The question] is about who controls it.” The coalition wants “to put forward a vision of abundance and fight back against the use of scarcity as a way to drive an extractive agenda,” Jacobs explained.

There’s good reason to focus on cities. For one thing, about two-thirds of the country’s population lives in them. For another, they are hotbeds of organizing, from Occupy Wall Street to Black Lives Matter. The Partnership for Working Families aims to connect those organizers so they can help each other build their movements.

In New York, as Governor Andrew Cuomo invests in new subway lines and upgrades, such as electrifying city buses and adding a new train to connect Manhattan with LaGuardia airport, ALIGN, a community organization in the city, wants to ensure that money is also going to serving “transit deserts” that don’t currently have access to the subway. “We want to have transit equity,” said Maritza Silva-Farrell, the group’s executive director. Investment “needs to be given priority to those communities so folks can get to and from work and really allow folks to be able to live in the city.” One particular goal is to turn the city’s school bus system into a worker-owned cooperative while also transitioning to electric buses to benefit students’ health.

Advocates are also looking to expose the banks and real estate companies that may be profiting from the Metropolitan Transit Authority’s woes, including “figuring out why it is that we are so much in debt and how we’re covering the interest that we are paying,” Silva-Farrell said. ALIGN is working on a map of the corporations and banks that wield influence over the governor and state legislature as they make decisions about things like public transit.

It’s about “how we as people who live in the city can define, and will be defining, what kinds of transportation, housing, infrastructure overall we want in our city,” she said. “We’re trying to transform systems from the bottom up.”

Coalition members in Atlanta are also focused on transportation. “Traffic here in Atlanta is now so severe ... it’s really become an issue,” said Amari Foster, an organizer with Georgia STAND-UP. But currently, the Metropolitan Atlanta Rapid Transit Authority only serves a few counties.

In its most recent session, the Georgia legislature voted to give 13 communities not currently served by MARTA the opportunity to opt into an expansion. So now Georgia STAND-UP is pushing to get the issue on the ballot in three counties that are predominantly African-American or Hispanic.

The group also wants to install a transit rider on the committees that make decisions about public transit. Right now it’s made up of positions filled by elected officials. There’s no one “from the community that would have the community’s best interest in terms of new development and where they’re going to put stations,” Foster said.

“People are paying into this, they’re being taxed for the service, and it’s not everywhere that it needs to be,” she added. And yet it’s clear “how critical and important transportation is in terms of jobs and health and everyday life.”

Other cities are focusing on issues most important to them. In Pittsburgh, a group called Pittsburgh United is highlighting the connection between privatizing the city’s water system and the high concentration of lead in the water. To deal with massive debt, the city hired private firm Veolia in 2012 to oversee operation of the system. But the firm has been accused of cutting corners that led to high lead concentrations of lead in the water.

The lessons learned in that fight are also helping to inform LAANE in Los Angeles, which is also focused on public access to water.

While each city has its own agenda and goals, the general thread of public goods and public control binds the campaign together. The cities are in regular contact, sharing best practices on research, tactics, and how to expose the ills of privatization.

The structure, in which a coalition of cities band together but focus on their own grassroots initiatives, is purposeful. “A lot of times there has been a move to think that you can come up with one-size-fits-all solutions you drive down to the local level,” Jacobs said. Instead, We Make This City is focused on lifting up what’s going on at the grassroots. “There are a lot of solutions and ingenuity on the ground,” she said. “How do we learn from each other, share wisdom, share tactics, share strategies, and look at ways we can combine forces at key moments?”