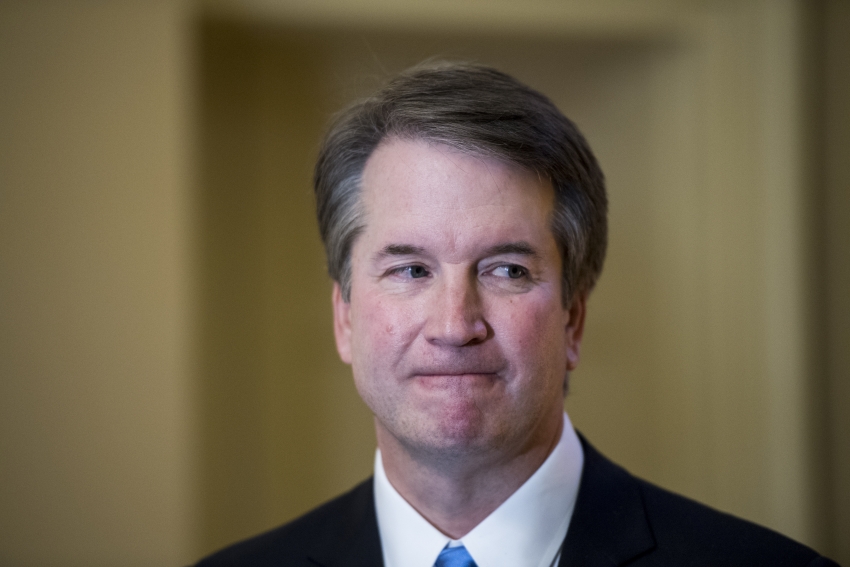 Brett Kavanaugh has shown a disturbing trend of siding with employers on a range of issues. (Bill Clark/CQ Roll Call/POOL)

On Monday, President Donald Trump announced his nomination of conservative Brett Kavanaugh to replace retiring Justice Anthony Kennedy on the U.S. Supreme Court. If Kavanaugh is confirmed, Chief Justice John Roberts, a fellow conservative, will become the ideological and political center of the Supreme Court, and protections for women, minorities, voting rights, civil liberties and more could come under threat. Workers and labor unions should be particularly concerned about Judge Kavanaugh’s history of siding with businesses against workers and for pushing a deregulatory agenda.

In his 13 years on the Court, Chief Justice Roberts has helped to unleash unlimited corporate money into politics, open the door to mass voter disenfranchisement and lay the groundwork to strengthen the power of corporations over consumers and employees. He has also, in the words of Justice Elena Kagan, led the conservative project of “weaponizing the First Amendment, in a way that unleashes judges, now and in the future, to intervene in economic and regulatory policy.” This is who will now be the swing vote on the Supreme Court if Kavanaugh is confirmed.

Kavanaugh, who is 53 years old, once clerked for Judge Alex Kozinski, who abruptly retired last year after a long history of sexual harassment was revealed. Previously, Kavanaugh worked with Kenneth Starr to investigate President Clinton and draft the report that lead to Clinton’s impeachment. Over his last 12 years on the D.C. Circuit Court of Appeals,  Kavanaugh has shown himself to be an extraordinarily conservative judge. An analysis by Axios determined that Kavanaugh is just slightly less conservative than the most conservative member of the Court, Clarence Thomas.

A review of Judge Kavanaugh’s decisions regarding workers’ rights shows a disturbing trend of siding with employers on a range of issues.

In Southern New England Telephone Co. v. NLRB (2015), Kavanaugh overruled the NLRB’s decision that the employer committed an unfair labor practice when it barred workers from wearing T-shirts that said, “Inmate” on the front and “Prisoner of AT$T” on the back. Under the law, employees are permitted to wear union apparel to work, and the NLRB found that these shirts were protected under the National Labor Relations Act. The Board rejected the argument that “special circumstances” warranted limiting workers’ rights, because no reasonable person would conclude that the worker was a prison convict.

Kavanaugh rejected the Board’s legal analysis, writing, “Common sense sometimes matters in resolving legal disputes. … No company, at least one that is interested in keeping its customers, presumably wants its employees walking into people's homes wearing shirts that say ‘Inmate’ and ‘Prisoner.’” Kavanaugh was undoubtedly correct in his understanding of the company’s desire not to have workers wear such shirts, which is precisely why the workers did so. What the unions did in wearing the shirts was apply pressure in a labor dispute in a manner that the law has long allowed. However, Kavanaugh criticized the Board’s analysis, writing that “the appropriate test for ‘special circumstances’ is not whether AT&T's customers would confuse the ‘Inmate/Prisoner’ shirt with actual prison garb, but whether AT&T could reasonably believe that the message may harm its relationship with its customers or its public image.” By shifting the focus to the employer’s public image, Kavanaugh undercut the right of workers to publicly protest and dissent.

In Verizon New England Inc. v. NLRB (2016), Kavanaugh overturned the NLRB’s ruling that workers could display pro-union signs in their cars parked in the company parking lot after the union waived its members’ right to picket. In his decision, Kavanaugh held that “No hard-and-fast definition of the term ‘picketing’ excludes the visible display of pro-union signs in employees' cars rather than in employees' hands, especially when the cars are lined up in the employer's parking lot and thus visible to passers-by in the same way as a picket line.” Therefore, according to Kavanaugh, the union’s waiver of the right to picket also applied to signs left in cars.

Judge Kavanaugh again overruled a pro-worker NLRB decision in Venetian Casino Resort, L.L.C. v. NLRB (2015). The NLRB had determined that the casino committed an unfair labor practice when, in response to a peaceful demonstration by employees (for which they had a permit), the casino called the police on the workers. Citing the First Amendment, Kavanaugh held that “When a person petitions the government in good faith, the First Amendment prohibits any sanction on that action.” Calling the police to enforce state trespassing laws, Kavanaugh concluded, deserved such protection.

In UFCW AFL CIO 540 v. NLRB (2014), Judge Kavanaugh issued an anti-worker decision involving Wal-Mart’s “meat wars.” After 10 meat cutters in Jacksonville, Texas, voted to form the first union at a Wal-Mart, the company closed its meat operations in 180 stores and switched to pre-packaged meats. (The notoriously anti-union Wal-Mart denied that its decision had anything to do with the union vote.) After the switch, Wal-Mart refused to bargain with the meat cutters, arguing that they no longer constituted an appropriate bargaining unit. Judge Kavanaugh agreed with Wal-Mart’s argument, but did write that Wal-Mart must bargain with the union over the effects of the conversion of the employees.

Judge Kavanaugh has consistently sided with employers in labor law cases, to the detriment of workers’ labor rights. He also has argued that the Consumer Financial Protection Bureau, established in 2011, is unconstitutional, and Aaron Klein, director of the Center on Regulation and Markets at the Brookings Institution, has said that his nomination “could reverse over a century of American financial regulation.”

Labor advocates should be extremely concerned about this ideological bent if Kavanaugh becomes a justice on an already very business friendly—and conservative—Supreme Court.