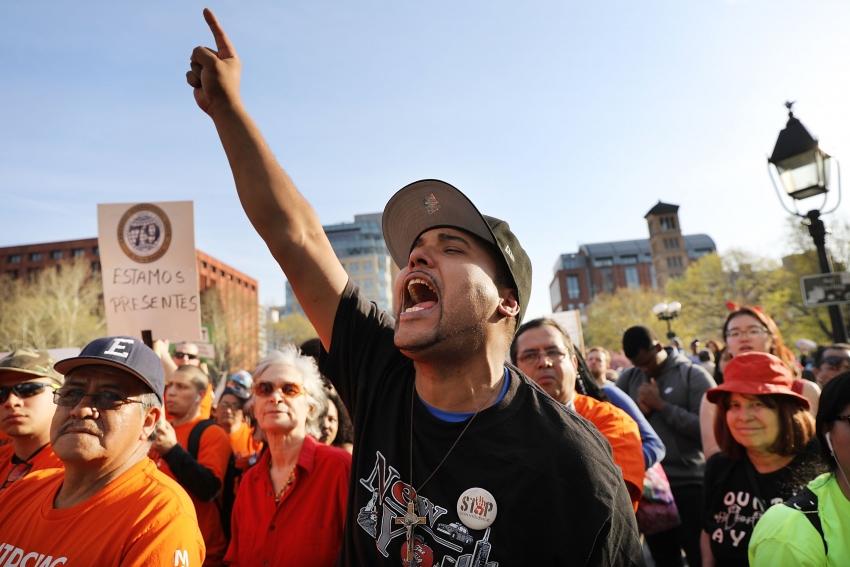 Voters in Missouri said loud and clear that they don't want right to work. (Photo by Spencer Platt/Getty Images)

After a string of victories across the country in recent years—including this summer’s Janus v. AFSCME Supreme Court ruling—the anti-union “right-to-work” movement has met its match in Missouri.

In Tuesday’s primary election, Missouri voters overwhelmingly rejected Proposition A, a ballot measure that would have made the state the 28th in the nation to adopt a “right-to-work” (RTW) law. Designed to bankrupt organized labor, the deceptively named legislation would have prohibited private sector unions from collecting fair share fees from workers they are legally required to represent.

With the defeat of Prop A in Missouri, the U.S. labor movement has passed its first major test since the Janus decision in June, in which the Supreme Court’s conservative majority essentially imposed “right-to-work” on the nation’s entire public sector.

“The timing of this is essential. I think everyone wants to write the labor movement’s obituary,” AFL-CIO Secretary-Treasurer Liz Shuler recently said. “It’s going to energize and activate us and show that we fight back.”

“It’s going to be the shot heard round the world,” AFL-CIO President Richard Trumka said last month, anticipating Prop A would lose. “It’ll make waves in Wisconsin and Pennsylvania and Ohio and Washington D.C. And it will provide a powerful rebuke of the Supreme Court’s disgraceful ruling in Janus.”

Since 2012, more states have passed RTW legislation than at any time since the 1950s. Even traditional union strongholds like Michigan and Wisconsin have gone “right-to-work.” Meanwhile, House Republicans have introduced a national RTW bill, which President Trump has promised to sign.

In states with “right-to-work” laws, median household incomes are $8,174 less than in non-RTW states, people under 65 are 46 percent more likely to be uninsured, infant mortality rates are 12 percent higher and workplace deaths occur 49 percent more often.

Missouri’s RTW legislation was initially signed into law last February by the state’s disgraced, now-former governor, Eric Greitens. A Republican backed by the Koch brothers and various “dark money” groups, Greitens served only 16 months as governor before resigning earlier this year amid a series of scandals and criminal allegations.

Greitens’ RTW law was supposed to take effect last August, but a coalition of labor groups led by the Missouri AFL-CIO gathered 310,567 hand-written petition signatures to block its implementation and force a statewide referendum on the legislation—Prop A.

Prop A was originally scheduled for this November’s general election, but this spring, the state’s Republican lawmakers moved it to the primary, worried that a high union turnout in November would be a boon to Democrats in hotly contested races. Described by Missouri AFL-CIO President Mike Louis as a “devious ploy,” the change marked the first time a referendum in the state has been moved to a primary election.

To defeat Prop A, union members and allies waged an aggressive get-out-the-vote campaign across the state, reaching some 500,000 voters through door-to-door canvassing and phone banking. They got help from actor and Missouri native John Goodman, who narrated a radio ad declaring that RTW “will not give you the right to work. Instead, it gives big business and out-of-state corporations the right to pay you less than they do now.”

All told, organized labor raised $15 million for the campaign to stop RTW in Missouri, outspending pro-RTW groups nearly 5 to 1.

This is not the first time Missouri voters have rejected RTW. In 1978, a similar state ballot initiative was defeated by a 60 to 40 margin, despite early polling suggesting an easy victory for “right-to-work” forces. That victory, however, was followed by a precipitous decline in the power of organized labor nationwide from the 1980s to today. Whether or not Tuesday’s defeat of Prop A signals a larger shift in labor’s fortunes remains to be seen.

If nothing else, Missouri voters’ rejection of RTW shows that the eulogies for organized labor post-Janus are premature. As Trumka says, “We’ve taken their best shot, and we’re still standing.”