Workers May Have Just Killed Missouri’s Right to Work Law 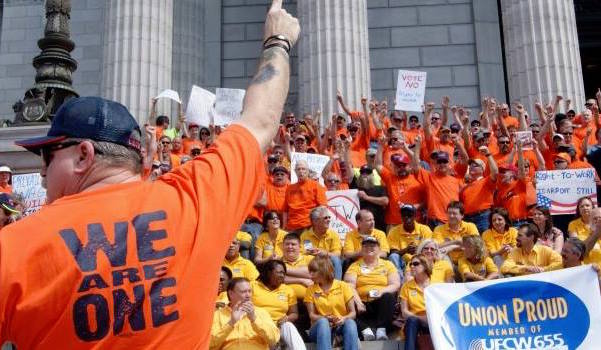 A coalition of labor groups collected over 300,000 to stop the right to work law from taking effect in Missouri. (We Are Missouri/Facebook)

In a badly needed victory for organized labor, a coalition of workers’ rights groups in Missouri is poised to halt a devastating new anti-union law from taking effect later this month.

The deceptively named “right-to-work” (RTW) legislation—quickly passed and signed into law this February by Missouri’s new Republican governor, Eric Greitens—would prohibit unions in private sector workplaces from automatically collecting dues from the workers they are legally required to represent. Designed to decimate unions by cutting off their financial resources, RTW laws are currently in place in 27 other states.

Though the law is set to take effect on August 28, the pro-union We Are Missouri coalition, led by the Missouri AFL-CIO, says it has collected enough signatures from voters to call for a state-wide referendum in November 2018 that could nullify the legislation. Implementation of the RTW law would be put on hold at least until next year’s referendum results are known.

We Are Missouri spokesperson Laura Swinford tells In These Times that Republican legislators had been wanting to pass a RTW law for years, but were blocked by Democratic Gov. Jay Nixon. As soon as Greitens was elected last November, she says, “folks were prepared.”

Missouri allows residents to call a referendum on new legislation by collecting signatures from at least 5 percent of voters from six of the state’s eight congressional districts. “When Gov. Greitens signed the so-called ‘right-to-work’ law, we had a petition ready to go,” Swinford explains.

We Are Missouri estimated it would need to collect at least 100,000 signatures to call a referendum on the RTW law. Swinford says volunteer canvassers went to festivals, concerts, county fairs and other events in every county to gather signatures. “Our volunteers have gone out there day after day, weekend after weekend, going signature by signature, page by page.”

So far, the coalition has tripled its initial estimation, collecting over 300,000 signatures. During a rally at the state capitol today, We Are Missouri turned in the petition along with 310,567 signatures.

“We have gotten a tremendous response,” Swinford says. “We believe we’re going to qualify in all eight congressional districts, which is pretty unprecedented here in Missouri. We have way overshot our goals.”

The National Right to Work Foundation sued to block the initiative on the grounds that the petition contained bad grammar, but the Missouri Court of Appeals threw out the lawsuit last month. Now that it appears they will not be able to prevent a referendum from appearing on next year’s ballot, Missouri RTW advocates are gearing up for a showdown in November 2018.

Over the past week, three anti-union political action committees in the state have received a total of $600,000 in dark money contributions. At least $100,000 of this money came from Gov. Greitens’s own nonprofit. Meanwhile, the Koch-funded Americans for Prosperity Foundation recently launched an expensive “education campaign”—including ads, door-to-door canvassing, and phone calls—to convince voters to approve the RTW law.

“You can open carry here in Missouri, but when you see something like that in front of your county courthouse, it’s alarming and upsetting,” says Swinford. “It’s going be a hard campaign, especially when you have to deal with those sorts of tactics. We just hope that people are safe.”

Missouri’s Republican lawmakers also recently passed legislation that will cut the St. Louis minimum wage from its current rate of $10 per hour to $7.70. The “right-to-work” law would also likely have a negative effect on worker pay, as wages are on average 3.2 percent lower in RTW states than those without RTW laws on the books.

Swinford says RTW would be “terribly hurtful to many Missouri families. It not only would lower wages across the board, it would erode benefits and make worksites less safe.”

In the past five years, more states have passed RTW legislation that at any time since the 1950s. Until recently, most RTW states were located in the former Confederacy, but now even traditional union strongholds like Michigan and Wisconsin are “right-to-work.”

Anti-union forces are not resting on their laurels. Earlier this year, House Republicans introduced a national RTW law, and the Supreme Court could soon hear a case that threatens to impose RTW on the entire public sector.

But anti-union legislation has been defeated before. In 2011, labor groups in Ohio called a referendum that successfully overturned the controversial Senate Bill 5, which would have severely curtailed public sector workers’ collective bargaining rights.

“What happened in Ohio shows that it’s possible to really educate folks and show them there’s a way to stand up when your legislature overreaches,” Swinford says.

“Missouri is not the only state that has a problem with extremists running amok in the legislature,” she continues. “We have the ability here through the referendum process to call them out on this behavior, to stand up and say, ‘Enough. We want you to work on the real problems we have in our state.’”

Swinford notes that she and other organizers have been amazed at how the referendum campaign has unified people of different backgrounds and communities. “People have really joined together on this. We have a lot of confidence in Missouri voters that they’ll be there in November 2018.”