Why the Left Should Embrace Debt Forgiveness 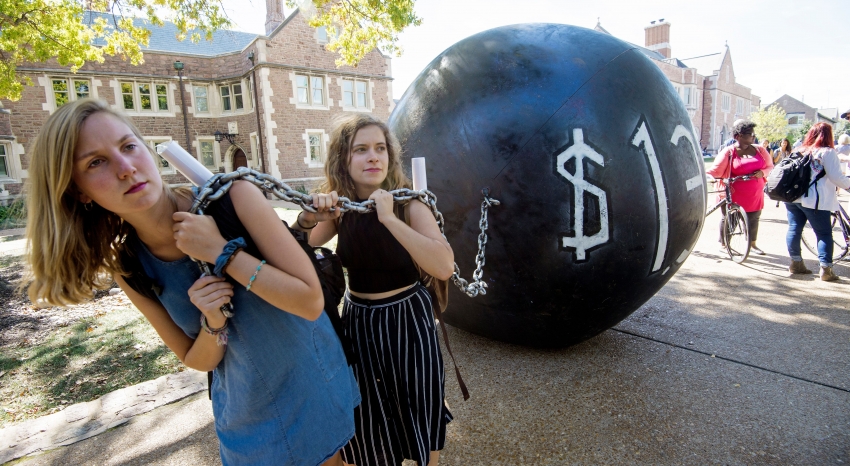 Barring a major upset in November, proud democratic socialist Alexandria Ocasio-Cortez will be heading to Congress in January. Breaking with many Democrats’ cautious triangulation, she ran on an unabashedly progressive platform which included Medicare-for-all, a federal jobs guarantee, the abolition of Immigration and Customs Enforcement (ICE), and housing as a human right. Yet the critical demand for a universal debt jubilee is missing from her slate—and is generally being left out of progressive policy discussions. As transformative left-wing policies move from the margins to the mainstream, we must fix this omission posthaste.

The political upshot of organizing around an issue that intimately affects so many people’s livelihoods would be enormous. Such organizing would throw the injustices and irrationality of capitalism into stark relief, encouraging the emergence of a coalition around economic justice that transcends race, gender, religion and other common cleavages in society. It would assuredly receive enthusiastic backing from the tens of millions of Americans who are shackled to enormous debts incurred through spending on healthcare and higher education, both of which are considered basic human rights in nearly every developed nation except for the United States.

A universal debt jubilee certainly wouldn’t be politically expedient. It would encounter major, sustained opposition from the many industries that profit immensely off of working people’s debts. It would be derided as pie-in-the-sky by the Right, centrists and many liberals. But it is necessary given the perilous economic conditions most people face today.

Contrary to propaganda touting a supposedly thriving economy, ordinary Americans live precariously. The American economy is defined by poverty and inequality. One of the central causes is debts that are choking the working class, which faces woefully insufficient wages and an ever-increasing cost of living in most cities. In 2013 alone, it’s estimated that medical-debt-related bankruptcies impacted 2 million Americans, and around 20 percent of adults have trouble paying their healthcare-related bills despite the increasingly imperiled Affordable Care Act. Similarly, student debt chains people to a lifetime of misery simply for trying to get an education: As of 2016, 42 million Americans were swamped in $1.3 trillion of student debt, and student loan debt now stands at about $1.4 trillion. The student debt business is a $140 billion annual industry, and debtors regularly face harassment from private collectors. In New Jersey, as a 2016 case revealed, it’s almost impossible to get out of student debt, even if the student in question has died.

Americans’ credit card debt is rapidly approaching their total student debt, amounting to $1 trillion in 2016. The anxiety it causes is intense: An April 2018 survey found that about one third of people with credit card debt would be willing to give up their social media presence for a year in exchange for having their debts relieved. Since its causes are more diverse than medical and student loan debt, credit card debt may be harder to defend rhetorically, because debtors are vulnerable to accusations of personal irresponsibility (unfounded though they are, given the numerous firmly entrenched economic structures that incentivize consumerism while discouraging frugality and financial literacy). But the ubiquity of credit card debt may make the general public more sympathetic to policies intended to alleviate it.

Attacks on the bail bond and payday loan industries would find extremely receptive audiences, as these industries are two particularly egregious examples of debt-driven vicious cycles. The payday loan industry, which preys on the poor, unbanked and underbanked, makes around $50 billion a year and charges interest rates of between roughly 200 and 575 percent. Likewise, the bail bond industry thrives on extreme poverty and misfortune: The bail bond industry underwrites almost $14 billion in bonds annually for those too poor to pay them on the spot, making nearly $2 billion in profit. Bail payments are an essential mechanism behind the profoundly racist, class-based system of mass incarceration. By focusing on the payday loan and bail bond industries, and connecting them to the various forms of debt that imprison even supposedly free Americans, an anti-debt movement could join forces with the movement for criminal justice reform. Together, a broad anti-debt coalition could expose the ways that poverty, inequality, debt and the profit motive feed off each other to keep people trapped within a system that rewards billionaires handsomely and keeps everyone else unfree.

Liberating people from debt would massively enhance their ability to control their own destinies. It would serve as a tremendous spur to the economy, eliminating tens of billions of dollars squandered annually on socially unproductive debt payments. The Bible—the source of the original call for a jubilee year where all debts are forgiven—says to “proclaim liberty throughout the land.” As the window of opportunity to defeat authoritarianism closes and Democrats look for a bold program to reconstitute our democracy, a debt jubilee is an important step towards making true liberty into a reality.