America’s Great Strike Waves Have Shaped the Country. We Can Unleash Another. 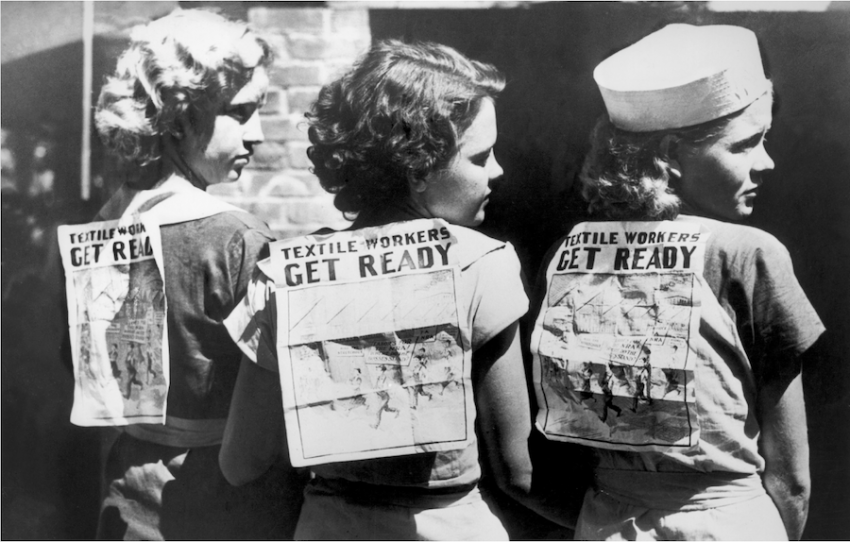 Erik Loomis’ "A History of America in Ten Strikes" is a powerful reminder of the need for worker militancy.

Workers’ power is rooted in the work we do and our occasional refusal to do it. But, until recently, that refusal had become rare: Work stoppages have declined to historically low levels over the past four decades.

How then do we revive the strike when so few workers have seen one, let alone participated?

For one, that may be changing. Teachers in West Virginia shut down all of the state’s public schools for nine days in February and March, winning a 5 percent pay increase, stopping proposed healthcare cuts, and inspiring statewide teacher walkouts in four more states and Puerto Rico. Fourteen thousand AT&T technicians then walked off in May, followed by strikes by thousands of other telecommunications workers against Frontier in Virginia and Spectrum in New York. There are ongoing one-day strikes staged by the Fight for $15, and prisoners across the country waged a 19-day strike for better conditions and against slave wages this past summer. As we go to press, 6,000 Chicago hotel workers are staging the industry’s first citywide strike in a century.

If the current pace continues, 2018 will see the largest number of strikes by U.S. workers in the 21st century. Strikes are once again a strategic option for some unions—and that could become contagious.

Still, this is not what a historian would call a “strike wave”—yet. Strike waves involve hundreds of thousands of workers across thousands of workplaces. In his classic text, Strike!, Jeremy Brecher explains that periods of mass strike—of which there have been only six or seven in our nation’s history—go beyond wage-and-hour demands and often challenge capitalist decision-making authority. That in turn threatens the fundamental rules of capitalism.

A timely book by professor and blogger Erik Loomis, A History of America in Ten Strikes, details strike waves of previous eras, recasting U.S. history as a continuum of worker protest. Driving both inspiration and lessons from this history is essential to turning the current upswelling of strikes in a wave.

Take the general strike of slaves during the Civil War, recounted by Loomis in chapter two. As soon as the Confederate Army mobilized, as many slaves as were able escaped to Union lines to offer support. Those who remained behind stopped working for their absent masters and turned plantations toward food production for their own needs. This self-emancipation is a historical framework first suggested by W.E.B. Dubois and only recently embraced by a new generation of historians. (Brecher, for example, did not include it in Strike!) It puts the human agency of workers who gained their freedom front and center. Suddenly revealed is the greatest strike wave in American history, hiding in plain sight!

The most storied strike wave is the surge of sit-down strikes of the 1930s that compelled the federal government to intervene with new labor laws that made unions a fact of economic life.

But even that win contained the seeds for our current age of inequality. In the 1938 Mackay v. NLRB Supreme Court decision upholding the constitutionality of the new legal protections for strikers, the Court breezily hollowed out that same right. If an employer had not otherwise broken the law, the Court invented the “right to protect and continue his business [while workers are on strike] by supplying places left vacant by strikers” and to put scabs ahead of the line for jobs when the strike is over.

Under the Reagan administration, corporations weaponized the Mackay Doctrine. The era’s most notorious strike may be the 1981 air traffic controllers strike (which Loomis covers), but its importance was mostly symbolic—Reagan’s signal to corporate America that it was game on for union-busting. It was the 1983 Steelworkers’ strike at the Phelps-Dodge copper mine in Arizona that actually created the modern blueprint for corporate union-busting, setting the stage for our current slide in work stoppages. The company bargained the Steelworkers to impasse over pay cuts, reduced benefits and weakened job security, basically forcing them out. Phelps-Dodge got the National Guard to violently remove the strikers from its mine and then bused in scabs from out of state. When enough time had transpired, the scabs voted to legally decertify the union.

This shredding of contracts to dare unions out on economic strikes remains the basic union-busting playbook. This year’s Spectrum strike in New York City, for example, has its origins in March 2017 when the company tore up the IBEW contract it inherited from the purchase of another cable company.

Workers’ right to strike needs to include the right to return to work afterward. That means challenging the Mackay doctrine, starting with demanding that the labor board enforce the actual standard—that the decision to permanently replace striking workers cannot be motivated by anti-union animus and must be necessary to “protect and continue” business. A $64 billion corporation that shredded its workers’ collective bargaining agreement fails both tests.

The Reagan and H.W. Bush labor boards took a dive and never seriously investigated corporations’ union-busting motives and financial bottom lines, which should have determined whether each instance of permanently replacing striking workers was just. Unions haven’t pressed for Democrat-appointed labor boards to revisit the rules. Any time that an employer advertises for scabs, the union should file an unfair labor practice, demanding that the employer prove the economic necessity of hiring permanent replacements.

Unions should start doing so now, anticipating the Trump labor board will dismiss every complaint. We must make this a controversy so the next Democratic labor board knows it must restore workers’ right to strike and then return to their jobs.

We have to use these strikes to shore up the very power to strike. Only that will ensure strikes aren’t relegated to the history books.