Today Amazon, Tomorrow the Railroad Industry: The Fight for $15 Rolls On 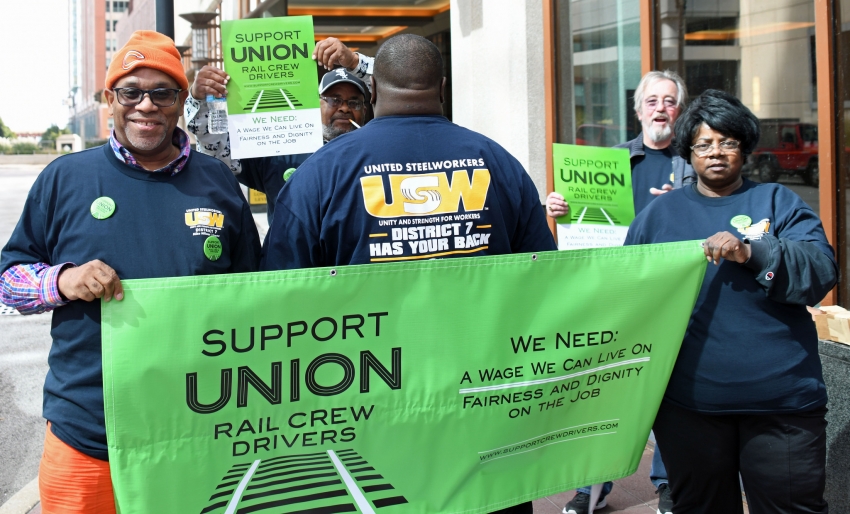 Workers rally in Chicago on September 27 outside a conference of railroad industry executives. (Ike Gittlen/flickr)

After being called out by labor activists and progressive politicians like Bernie Sanders for paying poverty wages despite receiving tax breaks and raking in billions of dollars, Amazon has caved to the pressure and announced it will offer all its workers a $15-per-hour minimum wage starting next month. Now, a new coalition of workers and community leaders is taking aim at another major player in the logistics industry: the railroads.

Class I railroads like CSX, Norfolk Southern and BNSF benefit from billions in taxpayer subsidies and are reporting high profits. Yet the people who transport their rail crews between trains, cities, hotels and homes are paid low wages and receive few benefits. To keep costs down and evade liability, the railroads use subcontractors like Hallcon and Professional Transportation Inc. (PTI) to hire their crew drivers.

“We’re dedicated drivers out here,” said Devin Ragland, a PTI driver with USW District 7. “It’s not fair that we’re out here from sundown to sunup, running these crews back and forth where they need to go, and then we get mistreated when it comes time for pay.”

Ragland and the other drivers were joined by Cook County Commissioner and congressional candidate Jesús “Chuy” Garcia, who called for an “end to the poverty wages in the rail yards.”

“I join your voices in saying to these railroad companies that they should adopt responsible contractor policies to ensure that the prosperity that they are experiencing is shared with all of the workers in the industry,” Garcia told the drivers.

UE, USW, SMART and UPSEU represent crew drivers from coast to coast. UE has been organizing Hallcon drivers nationwide for the past several years, recently winning a union election at the company that added 650 more drivers from 8 states into the union’s ranks, bringing the total number of UE-represented drivers at the company to nearly 1,700.

“Everywhere we go at Hallcon, people are at minimum wage or just above,” UE International Representative J Burger told In These Times.  Drivers say they earn so little that many are forced to rely on public assistance.

UE is currently negotiating a new master contract at Hallcon. Burger said the company is resisting demands for living wages, instead arguing that drivers should only get a one-time bonus or miniscule raises of between 15 to 20 cents per year.

“I’ve been told we were offered 21 cents. I can’t make a phone call with 21 cents,” driver and UE member Vickie Bogovich said on September 27. “Is that all I’m worth? I don’t think so.”

“They’re offering us pennies and we need dollars,” added Clarence Hill, a Hallcon driver who serves as Chief Steward of UE Local 1177. Hill said he is paid only $12 an hour after 8 years on the job.

The drivers are on-call at all hours of the day, required to hop in a company van at a moment’s notice to shuttle a rail crew from one location to another. Frequently, they wait hours at a time before finally getting a call. After one trip, they often have to wait several more hours for the next call, sometimes stretching their work day to 24 hours or more. Drivers are only paid for their driving time, not for the hours they spend waiting.

Burger noted this “stretch out” is not only unfair to drivers, but it also endangers the rail crews they transport, putting them at the mercy of fatigued drivers operating on little to no sleep. In contract talks, UE is fighting for on-call pay and more compact hours when the company is unable to put drivers to work.

Additionally, the union is demanding improved benefits, including paid time off and affordable health insurance. “We’re trying to make the job something people can actually live by,” Burger told In These Times.

UE’s current contract at Hallcon was originally set to expire in August, but has been extended to October 21. Meanwhile, USW, SMART and UPSEU—which represent drivers at both Hallcon and PTI—will also see some of their current contracts expire later this fall, setting up the potential for a nationwide strike that could disrupt retail freight in time for the busy holiday shopping season.

The unions have been increasingly coordinating efforts over the past year, trying to “have a united front approach,” Burger explained. “We’re all talking about raising the standards in the industry. We’re united for the betterment of the drivers.”

In addition to Chuy Garcia, the drivers also have the solidarity of the rail crews they shuttle. Other union workers in the railroad industry—including from the Brotherhood of the Maintenance and Way Employees and the Chicago All Rail Craft Coalition—joined Thursday’s protest.

“The labor movement was built on the simple concept that an injury to one is an injury to all,” Mark Burrows of Railroad Workers United, a coalition of rank-and-file rail workers from across North America, told the drivers. “We’re doing all that we can to educate our coworkers and get them behind this struggle.”