The Forgotten Wildcat Strikes That Swept the Country During WWI 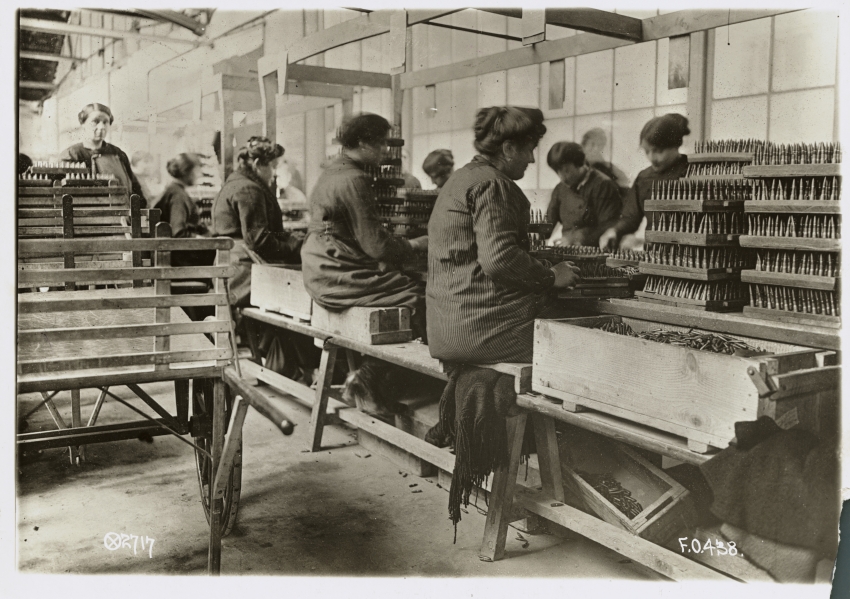 More than a decade before the New Deal, a wildcat strike wave during World War I brought about extensive concessions, including the right to organize, mandatory arbitration for employers, higher wages and shorter work weeks. As we enter the new year, it is critical to reflect on the key lesson from this little-known era of struggle: Class conflict drives reform, not the other way around.

Self-organized women textile workers, most of whom did not have a formal union, struck in 1915 across New England, including those employed at the Westinghouse Electric, Union Metallic Company and the Reminington Arms Company. Their wildcat strikes spread to workers in iron, weapons, clothing, timber, shipping, coal and other critical war industries, and the work actions picked up steam once the United States entered the war in 1917. Those strikes emboldened workers across the country to launch a strike wave that reached into the 1920s.

The Wilson administration responded to the strike wave by embarking on a new experimental policy of using rapid mandatory arbitration carried out by government labor specialists to end the disruption of weapons manufacturing. An array of newly improvised federal boards were set up to oversee war production and set wages in iron, weapons, textiles, timber, shipping, coal and other critical war industries. President Wilson soon settled on the National War Labor Board (NWLB), co-chaired by radical labor lawyer Frank Walsh and former President William Howard Taft, as the central coordinating body for labor relations. The NWLB became a short-lived embryonic prototype for what would later become Roosevelt’s famed Section 7(a) of the 1933 National Industrial Recovery Act and the 1935 National Labor Relations Act, also known as the Wagner Act.

Most historians argue that the Depression-era strike wave pushed the Roosevelt Administration to pass the Wagner Act. Yet, the historical records show this to be years too late—wildcat strikers had already pushed Wilson to put a temporary labor relations regime into place during World War I, nearly two decades earlier. The World War I wildcat strikers demonstrated that workers could use the strike to disrupt critical war industries. The strikes provided the critical leverage that led to government intervention to avoid disruption of the war effort. As a result, the Wilson aministration used the NWLB to extract concessions and reforms from arms companies that had otherwise been blocked, defeated or repressed by the companies.

When snap wildcat strikes threatened war production, the NWLB sent in umpires who investigated and proposed a mandatory settlement between workers and businesses to quickly restart production, sometimes within days or weeks. Workers also directly petitioned the NWLB to intervene in a labor disputes, umpires were sent in to investigate, and the board issued ad hoc rulings. Workers began achieving gains, such as shorter hours, standardized wages and better conditions that had long eluded American Federation of Labor (AFL) craft unions for years and provided a strategy that other workers emulated. A growing number of self-organized workers bypassed their AFL unions, which were collaborating in the war effort by committing to an unenforceable “no strike” pledge, and seized upon the wildcat strike to extract concessions. Workers were recomposing their power and tipping the balance of forces back in their favor.

What came out of the rulings were temporary gains but not long-term radical victories for the workers. The NWLB explicitly sought to maintain the existing relations between workers and capital, often splitting the difference by shortening work hours and raising wages in exchange for getting the workers back to work under the same working conditions. The board mostly ignored workers’ demands to reign in Taylorism, a strategy that rationalized the work process allowing management to usurp control over the labor process from the workers while tying pay to productivity.

The NWLB also adamantly refused to recognize newly self-organized shop-floor committees as unions or sanction collective bargaining to negotiate legally binding labor contracts. This refusal immediately backfired on the NWLB, as workers repeatedly struck soon again after successfully achieving a concession that lacked a legally binding contractual period. The Industrial Workers of the World (IWW), whose strikes were being savagely repressed by vigilante violence and anti-syndicalism laws at the same, had taught workers that the lack of a contract gave them a strategic advantage of continually assert their power on the shop floor to extract gains.

The NWLB compressed the wage hierarchy among the workers by putting all workers—men and women, skilled and unskilled—under a single wage scale and industry-wide work rules in single work sites, company-wide and even entire industries. In doing so, the NWLB inadvertently created the conditions facilitating working-class cooperation unseen since the American Railway Union and the Knights of Labor organized all workers into a single union decades earlier.

Not surprisingly, the corporations were hardly on board with mandatory arbitration. Nearly all of them initially refused to recognize the NWLB until President Wilson threatened to nationalize any company that refused to play along, which he did with Western Union Telegraph Co. and Smith and Wesson. That did the trick. The companies begrudgingly accepted mandatory arbitration for just as long as the country was at war and not a day longer.

AFL patriarch President Samuel Gompers also reversed course 180 degrees. He not only embraced mandatory arbitration, which he had once denounced as a form of slavery. Gompers became such a true believer that he even called for firing workers who refused to arbitrate or abide by NWLB rulings, and he backed company unions set up to take over NWLB mandated elected shop committees. In exchange for joining the Democratic Party’s big tent, Gompers became the chair of the Council of National Defense (CND) Committee on Labor, under whose authority he issued a ban on wartime strikes despite the AFL leadership voting against it. The AFL, now the AFL-CIO, has never relinquished its faith in arbitration, the Democrats and what we now call collective bargaining. The harnessing of labor to the Democrats didn’t begin with Roosevelt, as most labor historians wrongly claim, but during World War I and Wilson.

Let there be no illusion about the cause of these concessions: Wilson’s proto-labor-relations scheme kept production humming so that the guns on the European front could keep firing, killing workers of other countries on the battlefield. In the West, where the IWW entirely rejected collective bargaining and contracts, strikes in the timber industry were met with local terrorism and official repression. Mandatory arbitration for east coast war industry workers and repression of the IWW in the west were two sides of the same policy.

The NWLB temporarily slowed but failed to stop strikes. Workers used mandatory arbitration to raise their atrociously low wages, shorten their horrifically long hours and improve working conditions. Many wildcat strikes led to quick NWLB intervention and concessions which strengthened and emboldened workers. Ultimately, the NWLB was a prototype of collective bargaining that temporarily harnessed labor to state capitalism by exchanging higher wages for higher productivity just long enough to fight the war. This classic Fordist wage-productivity deal, in which unions trade higher wages for equivalent increases in productivity, was born during World War I—not the New Deal.

When the war ended, business retaliated by abrogating the concessions and issuing massive layoffs which sparked general strikes in steel and coal and led to workers taking over the city of Seattle. The 1921 Battle of Blair Mountain was the final battle of the miners’ army in West Virginia marking the final defeat of the World War I wildcat strike wave.

During World War I, the wildcat strike wave escalated tactics and strategy to open the way for long overdue concessions and reforms that shifted the balance of power to workers for years to come. This strategy of escalation appears to be emerging again today. The 2018 teacher strikes in five states and Puerto Rico demonstrated how disrupting production provides the necessary leverage to obtain much needed concessions when all other acceptable efforts have been blocked, defeated and repressed.