Privatization Is Fundamentally An Attack on Democracy. The Teachers Strikes Show Why. 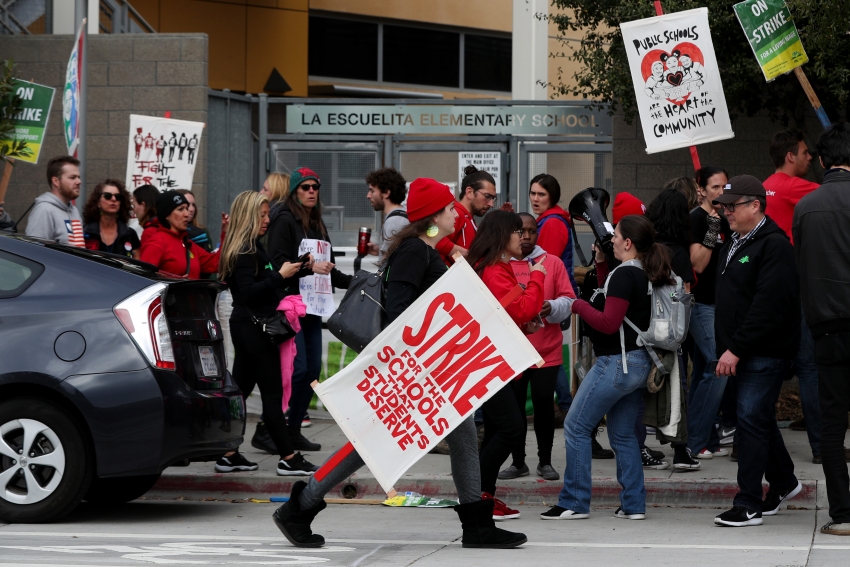 One key feature of the Trump era is a renewed public focus on the issue of democracy.

Last year’s congressional elections had the highest midterm voter turnout since 1966. Americans across the country have poured into the streets and packed the halls of Congress to protest President Trump’s power grabs. Over one million people convicted of felonies have regained the right to vote in Florida, thanks to a successful statewide ballot measure. New York City residents pushed their elected officials to all but force the world’s richest person, Amazon CEO Jeff Bezos, to walk away from $3 billion in tax breaks.

But leave it to public school teachers to educate us about a direct attack on democracy that’s been hiding right under our noses since long before the Trump presidency: Privatization.

A wave of teacher strikes is highlighting the country’s deepening education funding crisis while also raising concerns over the expansion of charter schools.

Last month, West Virginia teachers walked off the job to protest legislation that would have opened up the state to charter schools and private school vouchers. Also in February, teachers in Oakland walked off on strike in the midst of their district’s funding crisis, which is being fueled by out-of-date state laws that allow a virtually unlimited number of charter schools to open. And in January, Los Angeles teachers walked out, forcing their district to demand that state legislators reevaluate California’s charter school laws, which they’ve agreed to do in the coming months.

West Virginia teacher Katie Endicott from Mingo County—which Trump won in 2016 with more than three-quarters of the vote—didn’t pull any punches. “It’s infuriating that people would try to profit off us: Privatization would give millions of dollars to elites and it would create even more haves and have not,” she told Eric Blanc for Jacobin.

There should be no doubt that charter schools are a form of privatization. Despite being funded with public dollars, they’re often less transparent about how they spend money than traditional, neighborhood schools. They also often rent buildings that weren’t designed as schools and they pay teachers, who are less likely to be unionized, much less.

Most significantly, they’re managed by private boards of unelected members who get to decide how to spend public money with little to no accountability to parents, teachers and voters. Charter schools are, in a word, undemocratic.

Debates about privatization often shy away from questions of democracy and focus on costs—will outsourcing a public good, say, bussing, save the government money? Or on efficiency—if a charter school produces high test scores, who cares how it does so?

Evidence that privatization saves money is mixed at best, and charter schools generally perform about the same as neighborhood schools on standardized testing, but that’s beside the point. The more important question is: Will outsourcing take decision making power away from the public?

Charter schools certainly do. For example, Cesar Chavez Public Charter Schools for Public Policy, a prominent Washington, D.C., charter school chain, recently announced that it was closing one of its campuses with no warning. Teachers found out in the middle of the school day when a journalist reached out for comment. Some parents learned from seeing the closure reported on the news.

Because Chavez’s board meetings are closed to the public, and even to employees, no one knew the chain had been in financial trouble. No one could weigh in on the decision outside of the board, which includes a private equity investor and a retired ExxonMobil executive, among other corporate leaders. The board eventually explained that they decided to close the school to lease out its building, or, as they put it, “monetize the asset.”

There are certainly great charter schools, just like there are great neighborhood schools. And it’s understandable that some parents want to send their kid to a different school, particularly in poor and working-class communities where neighborhood schools are frequently starved of funding.

But when charter schools are allowed to replace neighborhood schools, they threaten the democracy that makes public education truly public.

In that way, charter schools are one tactic in a decades-long push by corporate-backed politicians, wealthy funders and conservative think tanks to privatize public goods and services. They fit right in with other forms of privatization, like private prisons, which turn our already out-of-control and inhumane criminal justice system into a gold rush for a handful of corporate executives and Wall Street banks, and “public-private partnerships,” which shield decisions about infrastructure spending from public view in complicated private financing contracts.

The through line is an attack on democracy. Yes, privatization is a corporate cash grab as well as a convenient way for politicians to dodge accountability and distract us from demanding higher taxes on corporations and the wealthy. But most of all, it takes decision-making power from the public and puts it into the hands of corporations.

It’s time to see privatization for what it is: An all-out attack on democratic decision making. Thankfully, by withholding their labor, teachers across the country are showing us the most effective way to fight back.