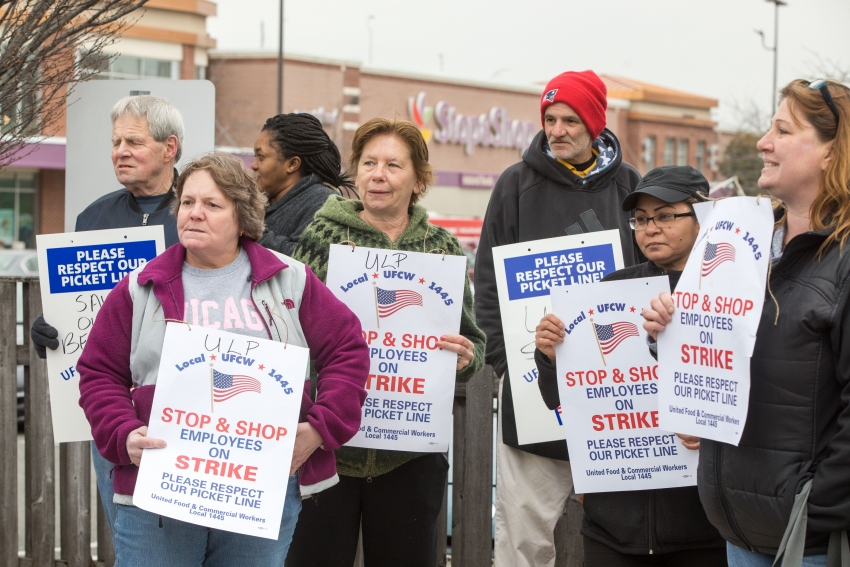 Stop & Shop workers maintain a picket line while on strike on April 12, 2019 in Somerville, Massachusetts. (Photo by Scott Eisen/Getty Images)

Roughly 31,000 employees of the northeastern grocery chain Stop & Shop have been on strike for nearly a week across more than 240 stores in Massachusetts, Connecticut and Rhode Island. The workers, represented by the United Food & Commercial Workers (UFCW), walked out on April 11 after voting to authorize the strike in March. During what is reportedly the largest private sector strike in three years, talks continued Tuesday, with neither side able to make an agreement.

Stop & Shop is owned by Ahold Delhaize, a retail company based in The Netherlands. Ahold Delhaize is a $44 billion company, and it's saved millions thank to the corporate tax breaks implemented by the Trump administration. Workers say that, despite these numbers, Stop & Shop is attempting to cut employee pensions, raise the cost of healthcare and roll back overtime pay. They’re also concerned about the company’s rising use of automation, which many believe will lead to inevitable layoffs.

The workers have received vast support throughout the community, while the stores have been forced to scrape by with temporary staff in many areas. An employee named Temika who works at a store in Providence uploaded a Facebook video detailing what the current state of the store. “I had a family member go in today and just take a look around,” she said, continuing, “It looked terrible. The prepared foods, the deli, the seafood department, the bakery—everything was shut down. The tables looked exactly the way they looked the day [everybody went on strike], which means they haven’t been rotating anything.”

The current state of Stop & Shop should be a legitimate concern for the company. The Southern California grocery strike of 2003 to 2004 led to the establishment of new grocery chains and customers shifting their allegiances after they began shopping at different stores. The same trend could very well impact New England. Customer Gail Zulla told a local news station that she used to shop at a Providence location of Stop & Shop but had been picking up her groceries at the local rival Shaw’s. "It's the busiest I've ever seen a Shaw's in my life,” she said, “It's like it's a snow storm. There's no bread, there's nothing." She said she’ll take her business elsewhere while the strike is underway, adding, "maybe I'll stay at Shaw's.”

When In These Times spoke with UFCW Local 1445 political director Jim Carvalho last month, he said that the union was hoping other workers would be inspired by the actions of the Stop & Shop employees. This appears to have born out. The striking workers have received solidarity from faith groups, other unions and local lawmakers. Rabbi Jon-Jay Tilsen of Beth El-Keser Israel in New Haven told The New Haven Register, “Any food purchased by crossing a picket line or from scab workers is not kosher for Passover.” The Teamsters Council 10 has stopped picking up trash for the company, and Massachusetts Democratic Senator (and presidential candidate) Elizabeth Warren showed up at a picket line with coffee and donuts for the employees. "These giant companies think they can knock unions back," Warren told the Somerville crowd on April 12. "Unions are here to stay because when you're fighting for your family, you stay in the fight until you win."

After a video of Boston Bruins legend Ray Bourque leaving a Stop & Shop was posted on social media, the former hockey player felt compelled to release a statement via Twitter. “Being a union hockey player for 22 years I respect Unions and the work that they do.” Bourque tweeted. “I have a medical condition that I was preparing for this morning and mistakenly crossed the picket line at Stop & Shop. On my way out I apologized immediately. I support the employees of Stop & Shop and once my medical condition is resolved I plan on returning to stand in solidarity and will walk the picket line alongside the members of the union.”

While unionization is declining throughout the country, Massachusetts—where most Stop & Shop stores are located—has actually experienced a sizable uptick. According to the U.S. Bureau of Labor Statistics, the amount of workers who consider themselves part of a union went up by 16% from 2017 to 2018.

However, Stop & Shop remains one of the only remaining unionized stores in the industry, as big-box retailers like Walmart have put others out of business in recent years. As grocery industry analyst Burt Flickinger recently told The Boston Globe, “Stop & Shop is the last, best, and final hope for the great Roman empires of unionized food retail chains.”