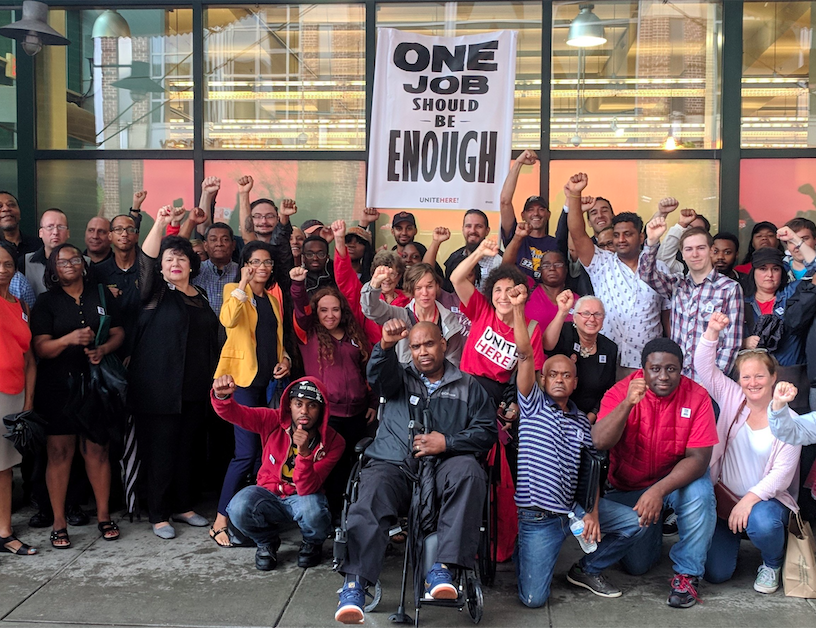 Hotel workers union UNITE HERE isn’t resting on its laurels after winning a contract fight with the giant Marriott chain late last year. The union is pursuing new organizing efforts, including a push in Baltimore for a first contract covering some 145 newly unionized members there, according to Vikas Mohite, a full-time Marriott employee and active rank-and-file union member.

UNITE HERE Local 7, strongly backed by an energized local labor community, rallied July 27 at the Marriott Baltimore Waterfront hotel to demand that corporate managers end their delaying tactics and get down to the business of negotiating a contract. Food and beverage staffers won the right to a union in a government-supervised election May 2 in which they voted 70-51 for the union, worker-activist Mohammed Saif tells In These Times.

The election win was part of the national UNITE HERE’s “One Job Should be Enough” campaign to improve existing contracts at select Marriott hotels, and to win labor union rights at the chain’s many non-union operations. It was launched last year ahead of the expiration of some major union contracts, and it continues now with new organizing efforts in Baltimore and elsewhere.

The final election numbers at the Baltimore Marriott are a little misleading, Saif explains, because the organizing campaign begun last September had actually attracted much stronger initial support. Saif and others had succeeded in getting some 112 workers to sign union authorization cards, he says, and the pro-union forces estimated they would get about 90 votes on election day. But a very aggressive effort by Marriott to suppress the union, which included compulsory anti-union meeting, firings of pro-union activists, and one-on-one pressure tactics, succeeded in scaring off or intimidating voters, according to Saif.

Saif's charges against Marriott are backed up by coworkers and union officials. "They've fired four union supporters since this campaign began. It's impossible to believe that is some kind of coincidence," says Local 7 President Roxie Herbekian. “The corporate people came. And they scared people,” adds Vikas Mohite, another Marriott worker and union activist.

Contacted by In These Times, Marriott corporate spokesman Jeff Flaherty said the company would not respond to individual charges made by the union but that Marriott "denies any allegations of improper conduct. We have always negotiated our collective bargaining agreements in good faith, at the bargaining table and not in the press, and will continue to do so here.”

Alleged intimidation tactics notwithstanding, food and beverage staffers are united in the demand for a contract that provides for higher wages and better health care, Saif and Mohite explain. Banquet servers typically receive a base pay of only about $5.20 an hour and must rely on income from a “service charge” paid by hotel customers for the bulk of their wage income. Mohite says that money from the service charge is pooled and then a small percentage is divided among the workers. A high priority in the new contract is to raise the percentage of service-charge income paid to staffers so that full-time work as a banquet server provides a living income without the need to hold down a second job. That’s not the case for Mohite right now, he tells In These Times, as he typically works as an Uber Eats delivery man each day after he finishes his Marriott shift.

Health insurance provided by Marriott is likewise inadequate, according to the union. A significant number have no company coverage at all, Saif says, and others will have their company health coverage cancelled during the off season when business is slow. Regular coverage for all full-time workers is a key contract demand.

If met, these demands will bring the Marriott workers up to the levels established by UNITE HERE contracts already in place at the Baltimore Hilton, Hyatt Regency Inner Harbor, Radisson and Crowne Plaza hotels, says Local 7 staff director Tracy Lingo.

The July 27 demonstration in front of the Marriott showed a local labor community strongly united behind the demand for a fair contract. Marriott workers made up a small percentage of the 50 to 75 marchers with the majority coming from a half dozen other local unions showing solidarity with the hotel workers. Prominent were members of National Nurses United, which is currently engaged in an organizing drive at Johns Hopkins Hospital, and the Musicians union, Local 40-543, now suffering a lock out by the managers of the Baltimore Symphony Orchestra. Other unions represented at the hotel demonstration included the Baltimore Teachers Union, the American Federation of Government Employees and the Laborers’ International Union of North America.

The Marriott workers are encouraged by the local support from other unions, Mohite says, but were especially inspired by the late 2018 strikes that hit eight cities across the country, notably in Boston, Detroit, and San Francisco. In those actions, more than 7,000 UNITE HERE members participated in job actions to pressure the company to renew old union contracts. The union wanted new contracts with improved wages and benefits and was largely successful in that effort, according to Lingo.

Marriott, with a long history of hostility to unions of all kinds, has taken on a greater importance for UNITE HERE following a 2016 merger with Starwood Hotels that made Marriott the biggest company of its kind anywhere in the world. According to company website, Marriott currently operates 5,700 properties in 110 countries. It is estimated to have about 176,000 employees.