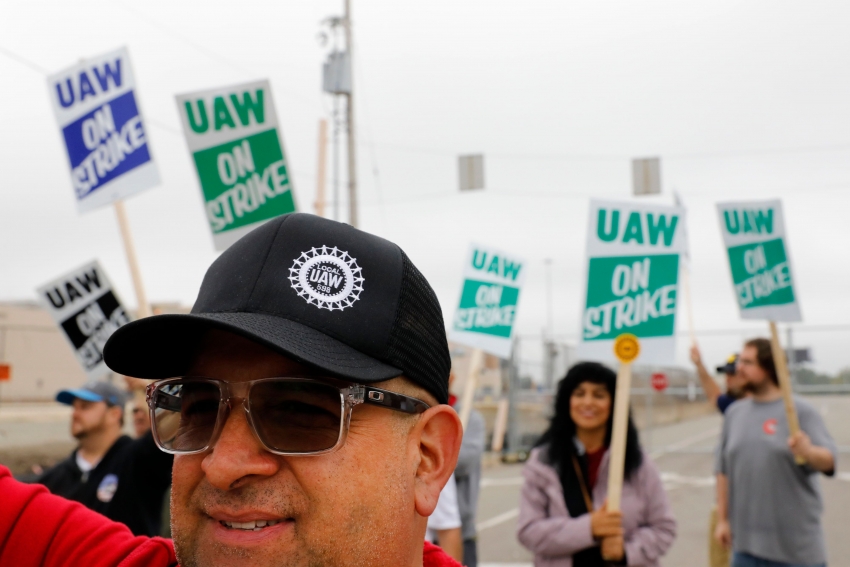 David Garcia, a United Auto Workers (UAW) member who is employed at the General Motors Co. Flint Assembly plant in Flint, Michigan, pickets outside of the plant as they strike on September 16, 2019. (JEFF KOWALSKY/AFP/Getty Images)

Nearly 50,000 General Motors (GM) auto workers left their posts and marched off the job en masse late Sunday night. Since then, it’s been all able bodies to the picket line. The strike is on.

With negotiations between GM and the United Automobile Workers (UAW) leadership hitting an impasse, the 2015 GM collective bargaining agreement expired at midnight on September 15. The UAW officially announced the strike after local union leaders from around the country convened on Sunday morning. The ensuing images of workers (including a coauthor of this article) hitting picket lines this week glow with an electric air of worker solidarity. From afar, one gets the sense of an undivided union showing its strength—united in the fight from top to bottom. But the view from the pavement tells a very different story.

Far from a unified front, the largest strike against GM in over a decade reveals something that everyone sitting at the bargaining table in Detroit knows and fears: The divide between the UAW leadership and the rank and file has never been wider. Much of this has to do with revelations from an FBI corruption probe implicating former and current union officials in alleged misdeeds, including rampantly misappropriating union funds and abusing the trust of their members. With news that even current UAW President Gary Jones is being investigated for corruption, anger and frustration among workers is palpable. And their feelings towards GM executives aren’t any rosier.

Workers have watched GM haul in major profits after having been bailed out by the public (to the tune of $11.2 billion) during the Great Recession—and kept afloat by the sacrifices its own employees agreed to make. Among those sacrifices was the introduction of a tiered wage system, which allowed GM to bring in more low-wage and temporary workers to do the same jobs for a lot less money. An ostensibly temporary fix that GM has more or less made permanent, this tiered system sows divisions on the shop floor, and UAW members want it gone.

Workers accepted these and other belt-tightening measures when the chips were down. But with GM generating a combined profit of $35 billion in North America over the past three years, it’s clear that the belt remains noose-locked around the rank and file while the engorged bellies and bank accounts of GM executives continue their unconstrained expansion. And after seeing these profits and their own sacrifices rewarded with plant closures and mass layoffs, workers are rightfully pissed.

Ask any long-term worker on the picket line and they will tell you just how vividly they remember what they had to give up to keep GM out of bankruptcy a decade ago—and how painfully aware they are of GM’s refusal to appreciate and adequately repay them for it. They haven’t forgotten, and they’re prepared for a long fight. Both GM and the UAW leadership have to know that they are sitting on top of a powder keg.

The rank and file tell the truth, and the truth is that this strike is decades in the making. The truth is that, like our fellow workers around the country and around the world, auto workers have had so much more taken from them over the past half century than they could ever hope to claw back in any collective bargaining agreement. And the truth is that what has been lost can only be taken back by the force of a democratic rank-and-file movement—a movement that refuses to be co-opted by the owning class the way the out-of-touch union hierarchies allowed themselves to be co-opted.

Day in, day out, we sweat and grind under the heavy sun of labor’s lost dreams: the dream of working to live, not living to work; the dream of workers having greater ownership over our workplaces, and having more of a say in what our economy produces and how; the dream of workers, not owners, actually being the ones who profit from our hard work; the dream of universal, guaranteed employment; the dream of necessities like healthcare being institutionalized as basic rights so that one’s employer could never have the grossly unjust power to take them away. A rank-and-file movement can and must re-ignite these dreams, and it must do so while recognizing and avoiding the pitfalls labor fell into before.

A strike against GM is one battle in a much larger class war waged against working people by the owners of society. To quote Walter Reuther, “There’s a direct relationship between the ballot box and the bread box, and what the union fights for and wins at the bargaining table can be taken away in the legislative halls.”

The bigger the bargaining unit, the more power we have. And the ravages multinational corporations like GM wreak upon our communities can only be fought with international worker solidarity.

In the past we were unified by geography. Companies like GM would envelope an entire city. With workers living so close to one another they could develop a culture of solidarity that bound them together. Now the workforce is global, split up over invisible lines in the dirt, caged within imagined national communities that are held together by guns, walls and bureaucracies. If our goal is to regain the power we once had, the power that gave birth to the labor movement in the first place, we need to broaden our vision, we need to see the global class struggle for what it is, and we need to act accordingly.

Unionism in one country is no match for capitalism in every country. We can’t just focus on one industry, one nation, or one job classification. We need to unify with our fellow workers across borders in a collective effort to win back what’s ours, the fruits of our labor.

Sean Crawford is a member of United Auto Workers and Democratic Socialists of America and a worker at the Flint Truck Assembly.Maximillian Alvarez is a dual-PhD candidate at the University of Michigan. His writing has been featured in The Baffler, Boston Review, Current Affairs, Truthout, etc. He is the host of Working People, “a podcast by, for, and about the working class today.”