Chicago Teachers Won Public Support for Their Strike. Here’s How. 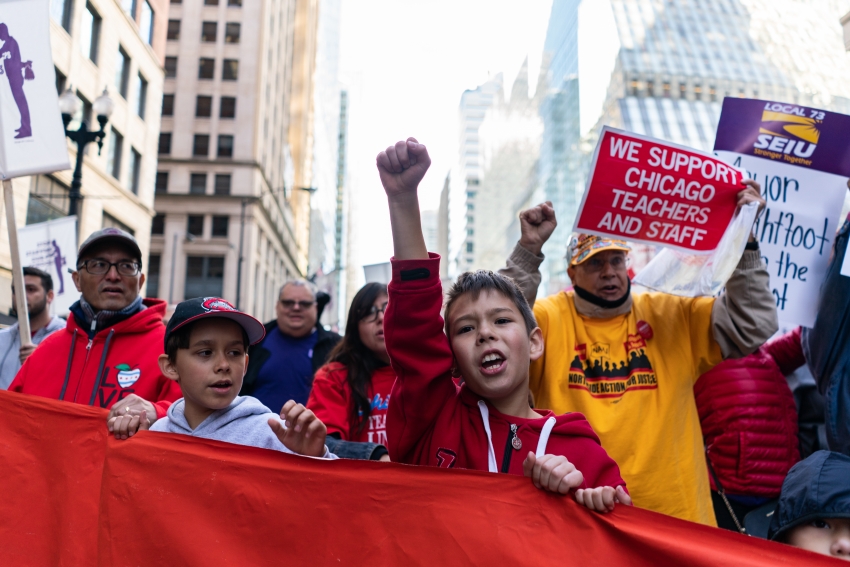 The Chicago public is more likely to side with teachers than the mayor when it comes to a CTU strike. (Photo by Max Herman/NurPhoto via Getty Images)

As 35,000 Chicago teachers, school support staff, and park district workers are set to begin a major strike on October 17, they boast the backing of students, parents, community organizations, and local unions who see the potential work stoppage as a crucial battle in the fight for a more just and equitable city. Thanks to the solidarity efforts of community and labor groups, more Chicagoans support the possible strike than oppose it, according to a recent poll by the Chicago Sun-Times.

The Chicago Teachers Union (CTU) and SEIU Local 73 are calling on Mayor Lori Lightfoot—who was elected this year on a progressive platform—to put in writing her campaign promises to improve the learning conditions of the city’s majority Black and Brown public school students. Among other things, the unions are fighting to have a full-time nurse, librarian and social worker in every school, caps on class sizes, affordable housing for students and their families, an end to outside contracting of school services, and better pay and benefits.

For their part, Mayor Lightfoot and Chicago Public Schools (CPS) have urged the CTU to give up demands for better resourced schools and accept a 5-year contract that primarily includes wage increases. The editorial boards for the city’s two major daily newspapers have lined up behind the mayor, telling teachers to “take the deal,” though a whopping 94% of CTU members voted to authorize a strike.

“It’s so vital we not allow CPS or the mayor to divide the critical people in this equation—which are students and parents—from the unions, which they would like to do,” said Elizabeth Lalasz, co-chair of the Chicago Teachers and Staff Solidarity Campaign (CTSSC)’s labor committee.

“If CPS and the mayor are able to create a wedge between the union and the community, it’s going to be a far less successful strike, so it’s about bringing those forces together,” continued Lalasz, who is also a steward with National Nurses United.

To bolster support for the CTU and SEIU Local 73, the CTSSC has held multiple events to bring teachers and community members together by having discussions about the conditions in the schools and the importance of the unions’ demands. One such event was an October 10 town hall featuring speakers from over a dozen community organizations and local unions.

One of the speakers was Catherine Henchek, member of the advocacy group Parents 4 Teachers. She explained that when her son enrolled in CPS as a kindergartner 12 years ago, she was told that he wouldn’t be able to get his medication every day because the school only had a nurse once per week.

“Twelve years later, we’re still fighting for this,” Henchek said. “So many schools do not have a nurse, or they have agency nurses that are coming in, a different nurse every day. That’s not helpful for kids with complex medical needs. They need someone who knows them.”

At an October 14 rally of union members and supporters, high school senior Miracle Boyd talked about why union demands for improved wraparound services matter to students like her. “We as CPS students have to deal with the trauma of losing a loved one to gun violence every day,” said Boyd. “We need trauma-informed schools, social workers, and therapists.”

Boyd is an organizer with GoodKids MadCity, a youth-led anti-violence, restorative justice group. “I have friends who miss school on the daily because… no one can help them with the hurt and pain of losing a classmate,” she said. “The resources students don’t have won’t allow them the opportunity to heal from past or continuous trauma.”

The CTSSC has existed since CTU’s historic 2012 strike, when it mobilized community turnout at rallies and pickets, coordinated the union’s strike headquarters, and served as an information hub. Since then, and increasingly over the past 20 months, a wave of massive teacher strikes has rocked the country—offering innovative examples of community solidarity that are now being replicated in Chicago.

One such example is Bread for Ed, a fundraising and solidarity project to provide meals to students and teachers for the duration of the strike. This program would provide a critical service, as over 400,000 Chicago students depend on school meal programs for breakfast and lunch.

Pioneered by the East Bay, California chapter of Democratic Socialists of America during the 7-day Oakland teacher strike this February, the Bread for Ed model has been adopted by Chicago DSA and Chicago Jobs with Justice. The two groups recently set up a Bread for Ed GoFundMe page, surpassing the original fundraising target of $10,000 in only three days. If a strike happens, food will be prepared and served at neighborhood organizations, aldermanic offices, churches, and local restaurants, as well as on picket lines.

“So far the response [to Bread for Ed] has been overwhelmingly positive. Tons of people are reaching out wanting to get involved,” Abby Agriesti, co-chair of the Chicago DSA Labor Working Group, told In These Times. “We want to make sure that the media and city can’t use the lack of food for students as a cudgel against the teachers and staff, blaming them.”

Community supporters also worked with the unions to hold an Art Build from October 4 to 6—another model borrowed from this year’s Oakland teacher strike. Held at CTU headquarters, the Art Build brought rank-and-file union members together with parents, students, allies, and artists to put their creativity to work by making picket signs, banners (including parachute banners), and posters to be used at strike pickets and rallies.

The CTSSC has organized weekly call-ins to the mayor’s office and drafted an online solidarity statement for individual union members around the country to sign onto, which garnered nearly 500 signatures within a week. The solidarity campaign is also circulating a statement of support pledging to join CTU and SEIU members on the picket lines, which has been signed by over 60 community and labor organizations across the city.

Meanwhile, members of Chicago DSA’s Labor Working Group have canvassed at CTA stops to talk with commuters about the importance of the unions’ demands and to inoculate them against anti-union talking points.

“The unions aren’t just bargaining for better wages or pensions; they’re bargaining for vital things that we need in our communities.” Agriesti explained. “We see this as hand-in-hand with our mission as socialists to build a better world.”

Efforts to build community support appear to be working, as indicated by the Sun-Times poll. The poll found that 49% of Chicagoans were likely to back the strike, while 38% would be opposed. A quarter of those polled are CPS parents, who overwhelmingly support the unions and would blame Mayor Lightfoot if there is a walkout.

If the work stoppage happens, the CTSSC plans to mobilize turnout on the picket lines through its email and text message list, as well as its social media accounts, which reach thousands of people. For parents, the coalition Raise Your Hand for Illinois Public Education has created a webpage with information on what families can do during the strike, including how to support the unions.

“Most parents don’t want a strike, we want our children to be in school, to be learning,” Henchek said. “But we know that if we’re going to have the wraparound services, the class sizes, the social justice that our children deserve, then there may need to be a strike.”