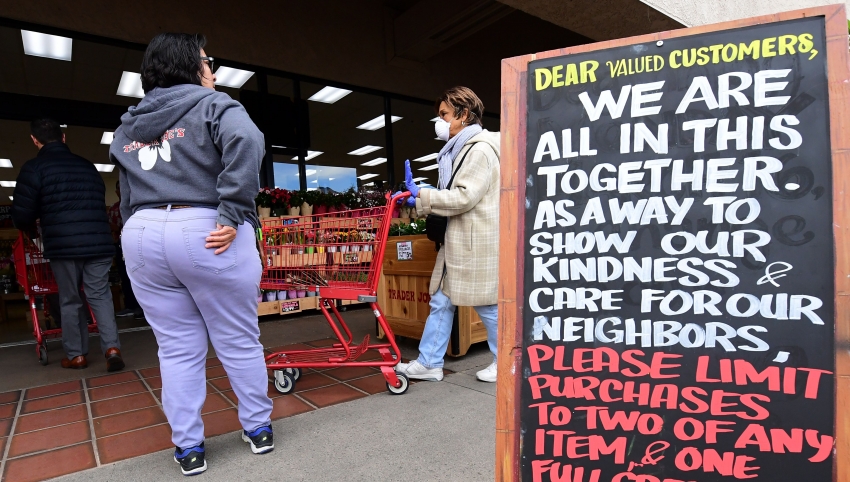 A sign posted in front of a Trader Joe's reminds shoppers of purchase limits as a woman wearing a facemask due to the coronavirus epidemic enters the store on March 18, 2020 in Monrovia, California. (Photo by FREDERIC J. BROWN/AFP via Getty Images)

Grocery store employees find themselves the subject of widespread public acclaim for continuing to work during the coronavirus crisis. But front-line workers at grocery chains across the country say they want something more tangible than congratulations: hazard pay. And they are winning it with spontaneous organizing campaigns forged in the crucible of a national crisis.

Since the outbreak of the coronavirus, at least a dozen separate campaigns by grocery employees have popped up on Coworker.org, an online organizing platform that allows workers to create campaigns for workplace change themselves. Some have already won hazard pay at their stores; others are locked in struggles with intransigent employers. Workers involved in five separate campaigns told us of stress and dangerous conditions at work—but also of the power of collective action.

At Market of Choice, an Oregon-based grocery chain, the CEO has granted a $2 per hour pay increase (less than the $3 per hour workers asked for, but an increase nonetheless). A.B. Carlin, a pizza cook at Market of Choice, says the increase is not enough, and that their colleagues remain “tense” and “stressed” about their own safety. “It irks me that corporate isn't willing to call it ‘hazard pay,’" Carlin said. “We're being exposed to hazards. Our work is increasingly hazardous. Not calling it hazard pay reads as an attempt to obfuscate that. Everyone at work seems generally grateful for the boost but also concerned about the lack of other protections or guarantees being offered.”

Employees at New Seasons Market, a grocery chain in the Northwestern United States, also secured bonus pay and other benefits during the crisis. A cashier at a store in Portland, Oregon, says that she appreciates the benefits, but doubts that the modest increases make up for the physical and emotional toll that the ongoing crisis is taking on workers there.

“The amount of emotional labor that’s expected of cashiers (especially someone like me, a friendly young woman) has always bothered me, but at this time it is so heightened and for me personally. It has become so intense I’ve asked to be assigned tasks other than ringing people up as much as possible. Staff in every department are stressed and overworked and worried for their families,” Johnson said. “I don’t really know if any amount of money would make working in this environment and being exposed to this level of risk feel worth it. Personally, I live with my grandmother and mother so it’s just really hard to know if continuing to come to work is the right choice.”

Those are the stresses on workers at chains that have granted some outright form of hazard pay. Elsewhere, gains can be more murky. One of the most prominent grocery organizing campaigns is at Trader Joe’s, where more than 20,000 employees have signed a petition asking for hazard pay, at the same time that an internal group has been calling publicly for a union drive. The company says it is setting up a “special bonus pool” for employees—money that workers say will come out to a raise of less than $2 per hour for the past month, which falls short of the petition’s call for time-and-a-half pay for everyone as long as the crisis drags on.

A group of Trader Joe’s employees involved in the organizing campaign, who answered questions anonymously, criticized “half-measures” by management in the face of an overwhelming public health threat. Workers described facing uncertainty, enormous crowds at stores, answering the same handful of questions over and over again from frantic customers, and a lack of management coordination on a national level that meant that different stores ended up with different enforcement policies on basic safety questions like the right of cashiers to wear gloves as they worked. “The company is leaving the health and safety of the base of their pyramid up to the mercy of each store's captain and regional manager,” one employee said.

All of that takes place in an atmosphere of “palpable” stress and long hours, in which perfect safety is impossible. Asked about the fear of becoming infected with coronavirus on the job, one worker replied, “infection is inevitable.”

Adding to the dissatisfaction is the perception that the company is using the crisis as an opportunity to undermine the nascent union drive and spread misinformation. The workers who created the Coworker.org petition say that “The company used the existence of this petition to lie to workers, telling them it was a trick to get people to sign their name to the union effort.” Another Trader Joe’s employee sent a photograph of a printed sheet of “Huddle notes”—talking points that managers use in employee meetings—that included a section of common anti-union talking points, such as “Unions are businesses. They need revenue, and they get revenue through union dues.”

Many grocery workers are holding fast in their demands for compensation that they feel matches the scale for the risk they’re taking—demands that can themselves be heartbreakingly modest. Nearly 4,500 employees of the grocery chain Fred Meyer signed a petition for hazard pay, and the company has given them, instead, a one-time bonus of $300 for full-time employees, and $150 for part-time employees. Lauren Hendricks, a Fred Meyer cake decorator in Washington state, says a $2 per hour raise would be more appropriate. “That is what I have seen other companies doing, and I think it's a great thing because it ensures part time employees notice a difference in their paycheck as well,” Hendricks said. “Risking our lives—our health and wellbeing—for regular pay isn't worth it. I had a customer straight up cough in my face the other day, he instantly apologized after he realized what he had done, but this is the perfect example of what we deal with on a daily basis.”

Then there are the grocery chains where workers are still struggling to win anything meaningful at all. At Publix, a large chain down south, almost 7,000 workers have signed a petition calling for time-and-a-half hazard pay. “All of my coworkers are sleep-deprived (plenty of them working 70+ hour weeks—it's a free for all with overtime right now), they're stressed out, on the verge of a complete meltdown, and it has made us far more agitated than I've ever seen,” said Summer Fitzgerald, a clerk at a Publix in Charleston, South Carolina. “We've worked through holidays and hurricanes, and I've never seen anything like this.”

Their thanks so far, she said, has been a $50 Publix gift card, and “a little snack table in the breakroom with free food.”

While the eruption of workplace activism inside grocery stores that have never had a labor union is inspiring, the larger context is still grim. Even as grocery employees enjoy their highest level of public support in U.S. history, most of their campaigns are demanding temporary, rather than permanent, increases in compensation and benefits. The nature of hazard pay itself is that it expires when the “hazard” is over. While some unionized grocery workers will likely hang on to their pay increases when this is all over, many others are skeptical they will get any lasting benefits. (“I foresee a pizza party as reward for our service, at most,” one worker said.)

Still, most grocery workers say they are getting more compliments and sympathy from customers than they have ever seen before. And A.B. Carlin, from Market of Choice, says there may be at least one silver lining: “My parents have stopped asking if I'm going to get a ‘real job.’”