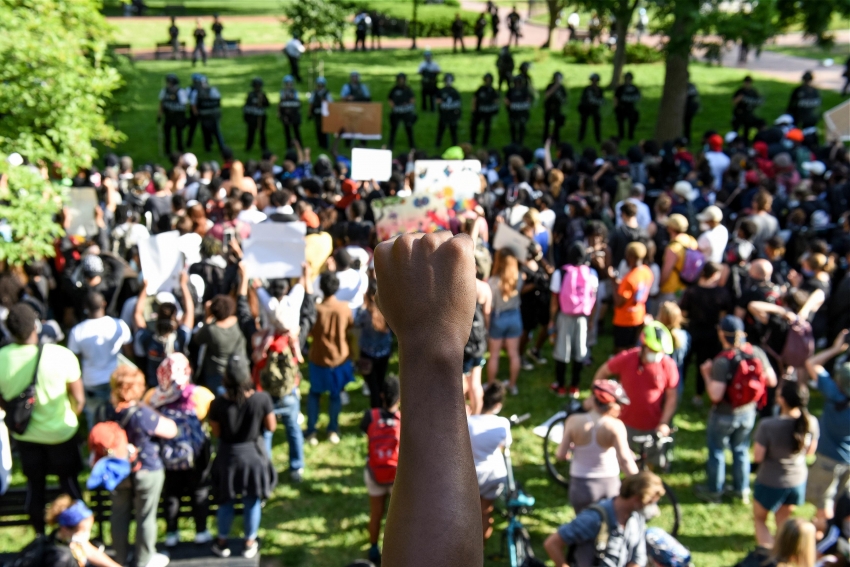 The president of the labor union that represents Washington, DC’s transit workers called Monday’s violent breakup of a downtown DC protest to make way for President Trump’s photo-op “appalling,” and said the labor movement needs to do more to support the protesters in the streets of America’s cities.

“Everyone in this country should be appalled at that—putting your citizens in harm’s way for a photo-op,” said Raymond Jackson, president of the 13,000-member ATU Local 689, the union that represents workers who keep the buses and trains running in the nation’s capital. “We’re in the middle of a movement, expressing ourselves. You’re seeing a country full of people that are fed up with systemic racism.”

Transit worker unions have offered some of the most visible support to the ongoing protests. Bus drivers in New York City and Minneapolis have refused to carry protesters that police have arrested, something that NYC transit workers also refused to do during Occupy Wall Street. Bus drivers in Washington DC are now taking the same position.

“That’s not what we were hired to do. We carry passengers. We do not arrest people. We do not transport criminals. We do not take people to jail,” Jackson said. “We shouldn’t be put in those kinds of dangerous situations. [Protesters] are looking at the operator of that bus as part of law enforcement—we don’t need that.”

On Sunday night, protesters in downtown DC smashed windows and set fires at the headquarters of the AFL-CIO, which is located next to the epicenter of the protests in Lafayette Square. On Monday, ATU Local 689 put out a statement in support of the nationwide protests that zeroed in on the labor movement’s role.

“Why did young black and brown workers, frustrated with constant injustice, not view the AFL-CIO as their natural ally with over a century of experience in the struggle for equality? Why did they not recognize that act as burning their own house?” the statement read. “What are we doing over the next few weeks to ensure that these workers out in the streets understand that the labor movement stands with them?”

Jackson emphasized that in previous generations, the civil rights movement and the labor movement were closely intertwined. Dr. Martin Luther King, Jr. was assassinated while supporting a sanitation workers’ strike in Memphis. Now, though, Jackson sees less of a connection between the two movements. He urged unions to take a prominent role in the “social injustice movement” that is propelling the current protests—“I’m sure some of my members are down there protesting,” he said—and to “let communities know we’re here for them,” such as when his members pass out free lunches.

It will take a conscious effort by the labor movement to rebuild its connection with the modern version of the civil rights movement, a movement that is now playing out every night amid tear gas and police violence.