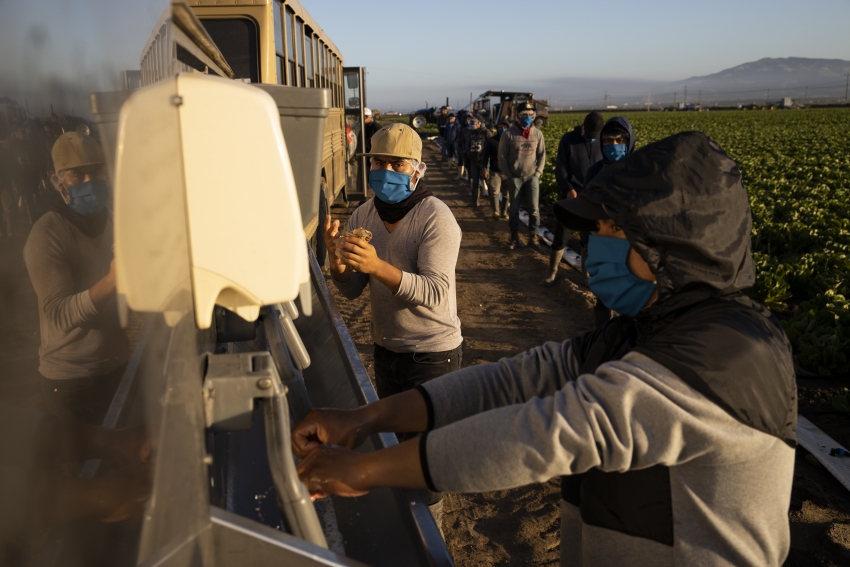 Pedro, a laborer from Chiapas, Mexico, worked 13 hours a day picking blueberries on a farm in Clinton, North Carolina. He had no time off, except when it rained.

"We had no Sundays," Pedro (a pseudonym to protect his identity after he breached his visa agreement) says in Spanish. Working from May to June under the H-2A visa program for guest farmworkers, he saved only $1,500.

According to Pedro, his work conditions and payment violated the contract he signed when he was recruited by a middleman in Mexico. Still, he could not quit his job. The H-2A program requires guest farmworkers to work only for the employer or association that hires them.

Pedro was entitled to a $12.67 per hour wage with no overtime, according to the H-2A provisions for North Carolina. However, Pedro says he never received more than $425 a week, or about $4.60 per hour.

"They took away our passport as soon as we arrived," Pedro explains. His employer tried to dissuade Pedro and his workmates from quitting the job. Still, he ran away, leaving his passport behind.

"Never in my life [have I] worked this hard, not in Mexico City or back in the fields in Chiapas," Pedro says. Undocumented and with no official identification, Pedro now works at a construction site in Georgia. "All the other guys stayed in the farm," he says. "They are afraid of being deported. They don't want to get in trouble."

Pedro's story is all too common. The wage provisions in the H-2A program are "routinely" violated, according to the Washington, D.C.-based nonprofit Farmworker Justice, and, as a recent Center for American Progress report put it, the lack of labor protections for foreign farmworkers like Pedro are already "particularly dangerous." The H-2A program has led to so much abuse of workers that many liken it to modern-day slavery.

Now, things could get even grimmer, as the Trump administration is proposing to reduce the statutory pay rate for H-2A workers, just months ahead of the presidential elections.

Workers' wages are already “extremely low by any measure, even when compared with similarly situated nonfarm workers and workers with the lowest levels of education,” an Economic Policy Institute (EPI) report found in April.

North Carolina is among the top recruiters of H-2A guest workers in the United States. The state, like the rest of the country, has grown increasingly dependent on this labor force. Nationwide, there has been a fivefold increase in the number of H-2A visas approved since 2005, climbing to 258,000 in 2019. Most of these workers are Mexicans or Mexican-Americans.

The growing reliance on H-2A visa farmworkers is often linked to a shortage of local labor, even among the undocumented population that comprises at least half of the U.S. agricultural workforce. The reality could be more problematic.

H-2A visa holders "are seen by employers as very productive. Employers often say they are better workers than the locals, but it has nothing to do with their performance," according to Bruce Goldstein, president of the farmworkers' rights group Farmworker Justice. "It has to do with the fact that the H-2A visa workers are not free."

Even undocumented workers, who are not necessarily tied contractually to their employers in the same way as H-2A workers, have more legal recourses to obtain compensation if they claim workplace abuse, according to Goldstein. H-2A workers are excluded from the Migrant and Seasonal Agricultural Worker Protection Act (MSPA), the main labor law that protects farmworkers. That's why, he says, H-2A guest workers are "very desirable by employers."

To satisfy the agriculture industry's desire for guest workers, the Trump administration, contradicting its anti-immigration stance, relaxed the rules around H-2A hiring and exempted farmworkers from a broad ban on foreign labor during the Covid-19 pandemic.

Now, the U.S. Department of Labor is considering publishing changes that would recalculate guest workers' wages. According to Goldstein and to publicly posted information, the changes could come as early as August.

Instead of using a labor market survey, the proposal would allow farms to hire workers at an “arbitrarily lower wage rate,” according to Farmworker Justice. In Florida, for example, the $11.71 per hour wage would be cut by $3.15.

Though Congress could stop these changes, the Republican-led Senate makes this a remote possibility. Another option is taking the administration to court, although the outcome would be far from certain, Goldstein explains.

"The only rational explanation for lowering the wages of H-2A farmworkers right now is corporate greed and unquestioning subservience to agribusiness on the part of the Trump administration," according to the EPI report.

If implemented, the wage cut would come even as farm owners received as much as $23.5 billion in federal aid due to the pandemic.

The new guidelines would mean that workers deemed "essential" and expected to keep working amid the pandemic, would risk their lives for even less money and no mandate for employers to provide them with Covid-19 protections.

Violations of the H-2A visa holders' rights are "rampant and systemic," according to a 2015 Farmworker Justice report. The Department of Labor "frequently approves illegal job terms in the H-2A workers' contracts," its findings show.

Five years after the report, the guest workers' conditions remain unchanged, according to Goldstein. They are similar to the ones under the Bracero Program—through which millions of Mexican farmworkers labored in the US from 1942 to 1964—which was ultimately terminated because of its notorious abuses, including wage theft, according to the report.

Even when employers comply with the contract obligations, H-2A farm laborers are among the nation's lowest-paid workers. The Covid-19 pandemic has made their jobs even more dangerous.

Farm owners are not mandated by the federal government to provide protective equipment or enforce social distancing in often overcrowded and unsanitary housing facilities, despite the risks to foreign workers' health, according to Anna Jensen, executive director of the nonprofit North Carolina Farmworkers Project. (State guidelines vary across the country.)

It's not unusual that laborers are only given one option to buy food, regularly overpriced, or that workers cannot receive visitors, says Jensen. It’s also common that the employers do not reimburse H-2A workers for traveling to the U.S., she adds, a practice that is very often illegal.

The violations often start in the hiring process. Two of the former deputy directors of the North Carolina Growers Association, the largest recruiter of H-2A farmworkers in the state, pleaded guilty in 2015 of fraud related to the program. Another infamous North Carolinian farmworker recruiter, Craig Stanford Eury Jr., also pleaded guilty to conspiracy to defraud the U.S.

Many H-2A workers, who aspire to return to the U.S. farms in the following seasons, do not mention their mistreatment for fear of being blacklisted by employers. But even if they wanted to, filing complaints "is really difficult," Jensen says.

The North Carolina Department of Labor operates a complaint hotline, open only from 8:00 a.m. to 4:45 p.m. Monday through Friday, making it "not very accessible" for many migrant workers, according to Jensen. Twelve to 14-hour workdays, six or seven days a week, make filing a claim virtually impossible for guest farmworkers.

"The H-2A is an inherently abusive program," Goldstein says. It practically assures employers that even workers who do not stand the poor treatment will not complain, even when their passports are taken away, which could be considered an act of slavery or peonage, according to Goldstein.

If the Trump administration follows through with its plans, workers like Pedro could be forced to labor under these conditions while taking home even less money than they already make.

Maurizio Guerrero is a journalist based in New York.