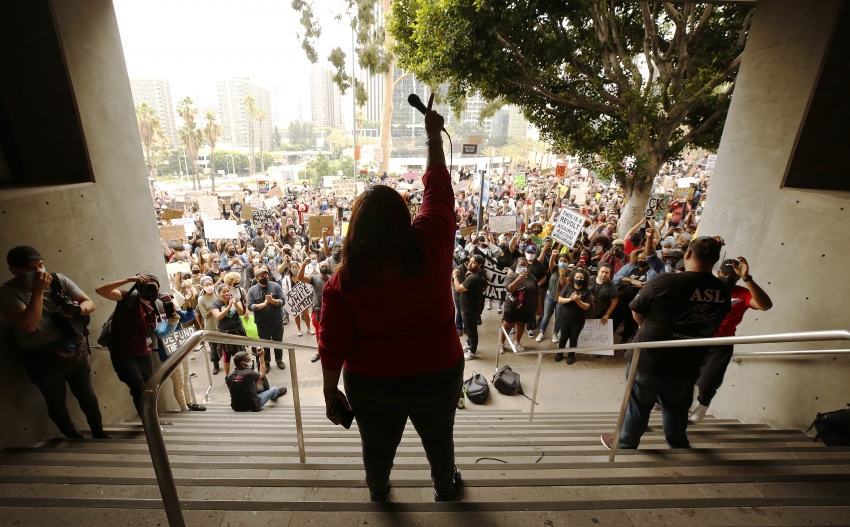 "The concept that this is just a teachers' fight is a misnomer. This fight is collective." (Al Seib / Los Angeles Times via Getty Images)

As American families fret over a patchwork set of standards for reopening schools that vary widely by city and state, teachers unions across the country are denouncing the Trump administration’s approach to the issue as ill-advised, life-threatening and unjust. And they’re vowing to do something about it.

President Trump has demanded that schools reopen in the fall, and his education secretary, Betsy Devos, has adopted his position. But there has been little effort by the federal government to provide any of the gargantuan resources that would be necessary to reopen schools in accordance with public health guidelines.

In April, the American Federation of Teachers (AFT) issued a lengthy plan for safe school reopening, with standards based on measurable declines in the prevalence of Covid-19; testing, tracing, PPE, and procedures for physical distancing in schools; and community investments to enable schools to work in concert with public health measures.

Three months later, the country is experiencing booming infection rates and meeting none of the union’s suggested standards, but the administration seems determined to reopen schools regardless. “If Donald Trump and Betsy Devos actually listened to what we were saying—we were trying to reopen schools so we could meet the needs of kids,” said AFT President Randi Weingarten. “Instead, they decide to be all reckless.”

Now, local and regional teachers unions are engaged in fevered negotiations with school districts over reopening plans. Results, predictably, vary depending on the locality. In Los Angeles, the school district announced that it will begin the year with virtual instruction only—a decision made in consultation with the United Teachers of Los Angeles (UTLA) union, which famously went on strike in 2019 not just for better pay, but also for smaller class sizes and nurses in schools. In a poll released last week, 84% of UTLA members said they did not think schools should reopen for physical classes next month, considering the ongoing coronavirus surge in California.

It is clear that the L.A. school district respects the teachers union’s power. Cecily Myart-Cruz, the president of UTLA, notes that the union called for a protective shutdown of schools on March 12, and the school district announced a shutdown the next day. Now, the union is calling for a broad set of social justice issues—structural racism in healthcare, mental healthcare, defunding the police, and paid sick leave policies, among other things—to be addressed in concert with the basic safety issues of reopening schools. It is a “bargaining for the common good” approach for the coronavirus crisis era.

“Can we do more? Can we ask for more? Can we demand more?” asked Myart-Cruz. “With Covid laying bare every single inequality in the book around BIPOC folks, if we solely wanted to work on education issues, how would we ever bring the community to the table.”

Instead, she said, now is a time for teachers unions to leverage their position as representatives of vital workers to demand that the government tackle the bigger, underlying issues that manifest themselves in schools. “We have to stop being scared. We have to stop being nice,” she said. “There has to be a more militant stance, especially when it’s on behalf of our members. I can sleep at night knowing that we called for the health and safety” of students, teachers and community members.

In Chicago, where intense negotiations over reopening plans are still ongoing, the Chicago Teachers Union (which, like UTLA, went on strike last year to fight for a social justice agenda far broader than just wages and working conditions) is taking the same stance, and making the same set of demands as their counterparts in Los Angeles. The union is asking for school to start in the fall with virtual classes only, as a safety issue. But members are also pursuing the same agenda of community investment that has been driving them for years.

Stacy Davis Gates, the CTU’s vice president, emphasized that the burdens of unemployment, evictions and sickness fall disproportionately on the same communities that Chicago’s public schools overwhelmingly serve. “In Chicago, the vast majority of students are Black and Latinx. There is no way we can levy an argument about our classrooms and not also levy an argument about our community,” she said. “Many of our parents are front line workers. Many of our students are front line workers. The concept that this is just a teachers' fight is a misnomer. This fight is collective.”

In Chicago, as in L.A., elected officials know that there is a credible threat of labor action if they push the teachers unions too far. (“CTU has a reputation for a reason,” Gates said wryly.) That is less true in states that are more hostile to unions, where Republicans and Trump allies are in control. The poster child for that situation right now is Florida, where Republican Gov. Ron DeSantis announced that he expects schools to reopen for in-person attendance five days a week, even as the state sets new coronavirus infection records. Figuring out how to deal with this damn-the-torpedoes approach to safety is the job of Fedrick Ingram, head of the 150,000-member Florida Education Association (FEA).

“It’s an insult to educators to give us a slogan without giving us a strategic plan behind that,” Ingram said. “You can’t be reckless with public schools. These are children we’re talking about. And for teachers, their lives are in the balance.”

Ingram said that the FEA reached out to the governor’s office earlier this summer to discuss developing a safe reopening plan, but did not get a response. Instead, DeSantis made his unilateral pronouncement, soon after Trump himself made it clear he wanted schools open. Now, Ingram said, some longtime teachers are retiring, and others are “literally going to lawyers creating wills because they need to work.”

The words “reckless” and “irresponsible” echoed through every teachers union leader’s description of the government’s reopening plans. All criticized the fact that there is no rational, science-based national standard. The safety of teachers and students from a deadly pandemic is being determined largely by the quality of local political leadership, which varies widely.

Likewise, the response of teachers unions is, to a large degree, local. While Weingarten says that “nothing is off the table” in terms of a response from the AFT—and the union has commissioned a long legal memo, published by Payday Report, advising on how members concerned about their safety at work can use the law to protect themselves—she also is not throwing the full support of the national union behind the calls of her more radical locals to tie social justice issues directly to school reopening decisions.

“I don’t think parents would forgive us if we ended up saying it’s not just safety we’re focused on,” Weingarten said. “I don’t think anyone should use safety as a bargaining chip.”

One thing that everyone seems to agree on is the incompetence and flagrant disregard for safety of the current administration. “Would [Betsy Devos] send her kids to that public school? That’s the question I want to ask,” said UTLA’s Myart-Cruz. “It makes me pissed!”