In Summer of Strife, China’s Proletariat Debuts on World Stage 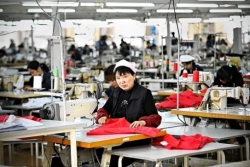 A worker at a factory near Shanghai.   (Getty Images)

Napoleon supposedly said that when China wakes, the whole world will shake. When young Chinese workers rose up in a wave of protests this summer, their small acts of defiance crested into a global tremor.

The explosion of labor action in Chinese cities, including the high-profile Honda protests, is bearing some political fruit. Guangdong is working on a set of reforms to give muscle to collective-bargaining laws that have thus far existed mostly on paper. According to the Hong Kong-based China Labour Bulletin (CLB), although the “collective consultation system” has been on the books for twenty years, Guangdong has just given workers two advantages:

CLB's William Nee told In These Times that Guangdong has a history of initiating relatively pro-worker policies, and with the global recession easing, “it’s not surprising that Guangdong is going back towards taking the progressive approach that it was taking before the crisis hit."

Now the challenge is making sure the law has the political momentum to actually be enforced. Li Qiang of China Labor Watch said authorities had a political interest in preventing strife. “If [All China Federation of Trade Unions] does not do anything to advocate for workers,” he told ITT, “independent labor unions might start, which is a situation that  the government does not want to see.”

Indeed, the concessions that Honda made and the absence of a harsh government crackdown suggests that authorities would rather harness the swelling unrest than risk ugly confrontation.

Outside China, foreign companies and unions ought to rethink their relationship with world's most vital and misunderstood proletariat. The combination of bigger ambition and uneven development has created a deeper sense of entitlement, even incipient class consciousness among workers—especially rural-to-urban migrants whose lives have changed radically under economic liberalization.

The recent reforms are limited to Guangdong and are clearly meant to preserve order while avoiding PR disasters like the Foxconn factory suicide pandemonium. Yet they could help politicize workers in the long run by demonstrating that direct action can yield results—no small feat in a society rife with government impunity and rising materialism.

The New York Times suggests that a vibrant sense of community among workers is fueled by education, youth culture and technological innovation—modern phenomena that Chinese workers are finally indulging in on a wide scale, after a generation of producing modernity for the rest of the world:

The result is that a growing number young people are ambitious, optimistic and more aware of their rights, said Lin Yanling, a labor specialist at the China Institute of Industrial Relations. Then there is their fluency with technology — cellphones, e-mail and Internet chat — that connects them to peers in other factories. “When they bump against unfair treatment, they are less afraid to challenge authority,” she said.

The Honda protests definitely won't solve the huge injustices suffered by workers across China, but they did reveal a maturing workforce that resists being taken for granted as unlimited cheap labor.

Katie Quan, associate chair of the UC Berkeley Center for Labor Research and Education, told ITT that the success of recent worker actions shows that as China transitions toward a higher-wage, “high road” economy, corporations and official unions have little choice but to yield to the pressure from organized, educated workers:

In the Foxconn and Honda disputes the unions in the plant were not speaking for and leading the workers, and in other cases Chinese unions actually have sided with employers against workers.  Unless Chinese unions can resolve this identity crisis, the new, young, educated workforce is not likely to look to unions for leadership.  This could lead to further labor instability and have an enormous impact on whether China succeeds in becoming a modern, developed economic power.

The evolving identity of the Chinese worker could also dissolve stereotypes of a workforce of faceless drones. The AFL-CIO and UAW took a break from their usual fire-breathing attacks on Beijing's currency manipulation, to show a little solidarity with the brothers and sisters who have supposedly been stealing American jobs. In June, Richard Trumka and Bob King declared in a joint statement:

We stand in support of China's Honda workers and their reasonable demands.  We call on Honda to accede to their demands-- to improve its wages structure and job promotion system at its China facilities by implementing genuine and continuous collective bargaining with representatives of its front-line workers.  Genuine collective bargaining is a proven method of ensuring fairness and harmony in the work place.

The union leaders should know that “fairness and harmony” don't always go hand in hand on China's feverish assembly lines. That they directed their words more to Honda CEO's than to the impacted workers suggests that mainstream American labor is as reluctant to stir worker militancy abroad as it is in the U.S.

Still, Nee predicted that the new reforms in Guangdong “would give more practical opportunities for the labor movements to work together, and there would be more opportunities for solidarity.” This might involve “a new crop of real ACFTU trade unionists and worker reps, and a larger group of lawyers and academics who could interact with the international community).”

Typical Chinese workers probably don't devote much thought to movement building, but they're starting to  contemplate their horizons beyond day-to-day survival. One prescient voice that has risen out of recent labor unrest is Qing Tong, who recently documented her experience as a migrant factory worker in an acclaimed book. She explained to the Financial Times how she and other young workers embody China's ambiguous future:

“Our parents’ generation would keep their heads down and endure. But our generation is different,” says Qing.... “We need to feel at ease,” she says. “The most important thing in life for us is to realise our ­values. No matter if it’s life, love, work – we are not going to be ­humiliated like our parents were.”

But what are those values? The ability to buy a home and consume the pleasures of a Western lifestyle? A more equal society that gives citizens a say in how their communities are governed? Or just the freedom to dream, speak and be heard? Whatever road workers choose, their path will define the meaning of labor in the 21st century global economy.