On the World Stage, U.S. Falls Flat on Women’s Equality 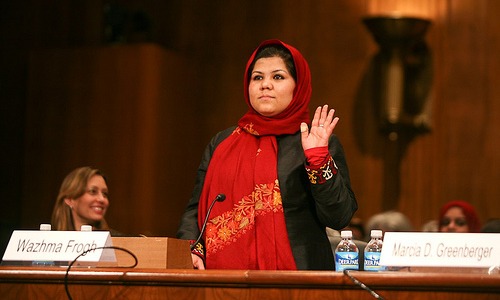 Wazhma Frogh of the Afghan Women’s Network at the November 18 Senate hearing on CEDAW.   (Photo by cedaw2010 via Flickr)

The United States speaks boldly about women's rights in Afghanistan, about liberating Arab women in the Middle East, and about Mama Grizzlies and Supermoms on the home front. But when it comes down to codifying our commitment to women's equality in the law... we'll get back to you.

As the Senate bailed on the Paycheck Fairness Act, which would have strengthened critical anti-discrimination protections, lawmakers again locked horns on gender equity at the international level, in a debate on the Convention on the Elimination of All Forms of Discrimination against Women (CEDAW).

Along with Sudan, Iran and Somalia, the U.S. has yet to formally ratify the United Nations' CEDAW since it was launched over three decades ago. (It hasn't even been a century since the 19th Amendment, so conservatives understandably need a little more time to adjust.) The CEDAW is associated with campaigns against gross human rights violations like human trafficking or systematic violence against women. But the Convention is also a versatile framework for measuring equality in many arenas, including the global economy and the workplace.

Article 3 provides for equality in the "full development and advancement of women," especially in the "political, social, economic and cultural fields." Such words may prompt the same red flags that conservatives waved when fighting the Equal Rights Amendment (“by 'equality,' they mean mass abortions and the demise of the American family!”). But the text articulates a vision of gender justice that draws upon decades of feminist discourse.

Article 11 not only sets a standard of gender non-discrimination in employment, but also bars bias on the basis of marital or maternity status, which in theory decouples a woman's freedom to earn a living from her ties to a spouse or family planning decisions.

You could argue that an "advanced" society like the U.S. needn't bother with CEDAW, a treaty that seems geared toward countries like Morrocco and Kuwait, which struggle with severe restrictions on women's political and economic activities.

But understanding how gender equity plays out in America requires reading between the lines. For example, the Senate would have a lot to answer for if it were really bound to certain provisions of Article 11:

(d) The right to equal remuneration, including benefits, and to equal treatment in respect of work of equal value, as well as equality of treatment in the evaluation of the quality of work;

(e) The right to social security, particularly in cases of retirement, unemployment, sickness, invalidity and old age and other incapacity to work, as well as the right to paid leave

Sadly, the Senate's failure on Paycheck Fairness appears to be entirely consistent with our global outlook. In terms of the overall safety net, core concepts like social security, unemployment benefits, and paid medical leave, have all been stifled or threatened by deficit hawks in recent months.

Research indicates that the lack of such benefits hurts workers overall, but disproportionately punishes lower-income mothers and families. But, as we've reported before on this blog, initiatives on the federal, state and local level to provide paid sick leave—a benefit that millions of workers lack despite widespread public support—have confronted militant resistance from the right.

Many of the controversial family-friendly policies are of course taken for granted in Western Europe, where the welfare state is not (yet) politically taboo. But even so, the European Union continues to reflect CEDAW's guiding principles in ongoing efforts to close the gender wage gap and expand political participation.

The Convention has enjoyed only a brief flash in the Washington spotlight at a Senate hearing last week. As the Iowa Independent reports, the CEDAW has languished on the Senate's backburner for years despite the broad support from current and previous administrations, together with a slew of other national and international human rights, legal advocacy and community organizations.

Melanne Verveer, Ambassador-at-Large with the State Department's Office of Global Women’s Issues, testified before the Senate Judiciary Subcommittee on Human Rights and Law:

In my time at the State Department, I have visited scores of countries and met with women from all walks of life, from human rights activists in Russia, to microcredit recipients and small-business entrepreneurs in rural South Asia, to survivors of rape and conflict in the Democratic Republic of the Congo. In my travels, the number-one question I am asked time and time again is, “Why hasn’t the United States ratified CEDAW?” ...

Some governments use the fact that the U.S. has not ratified the treaty as a pretext for not living up to their own obligations under it. Our failure to ratify also deprives us of a powerful tool to combat discrimination against women around the world, because as a non-party, it makes it more difficult for us to press other parties to live up to their commitments under the treaty.

While U.S. hypocrisy is exposed when addressing the most blatant human rights crises on a global scale, the everyday injustice that women face in the American workplace displays a subtler paradox: hegemony is not leadership. In fact, it might just mean you never have to explain why you lag so far behind.