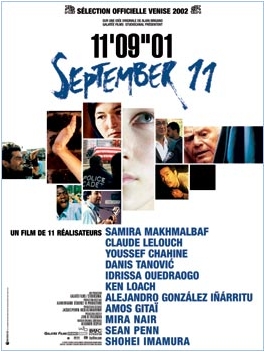 BY Joshua Rothkopf
Share TweetReddit0 EmailPrint
Since Spike Lee’s 25th Hour, I have been expressing a mixture of hope and doubt concerning the subject of 9/11 in movies. My hope was that more filmmakers would follow Lee’s example and grapple with an event that could no longer be pushed out of the backdrop of yet another New York crime thriller or witty romantic comedy; the city remains the site of so many of our dreams. My doubts had more to do with matters of taste and audacity: Could one reasonably expect these future films, assuming they ever got made, to have a fraction of the elegance and bite of 25th Hour, a simple story about a hateful drug dealer’s last day of freedom (as written by novelist David Benioff), but converted by Lee into a metaphoric indictment of failed vigilance, even complicity, in personal and global disaster?

Sometimes hopes and dreams come true in equal measure: 11’09”01—September 11 is an omnibus collection of 11 shorts by a most prestigious bunch—no blockbusters to their credit, but an unseemly number of Cannes prizes. Provocatively, there’s only one American in the lineup (and a far-from-uncritical one, at that), setting high expectations for global perspectives that are at least an ocean’s remove from the Saddam-stompin’ pageantry sure to be in flourish this anniversary weekend. (The film arrives via an independent distributor a full year after its wide release in several countries around the world; apparently, it’s been finally declared safe for American eyes.) Each short is of equal length—11 minutes, nine seconds and a single frame—and if the imposition seems a little pat, it nonetheless results in more voices being heard.

But 11 voices sure can produce an unholy racket. Unified only by its depressing timidity and a surprising lack of relevance, 11’09”01 is a failure. As the segments unspool like little clockwork oranges, a terrible banality takes root, worse even than the boldest jingoism you could imagine. The project smells of wasted opportunities, of navel-gazing, of one-worldism and blathering. Claude Lelouch uses his time to essay a deaf-mute’s lovesickness as the planes crash unobserved on her television set. Amos Gitaï completes his assignment with a single, chaotic shot featuring a bratty Israeli journalist whose local scoop is bumped by the larger events. And Sean Penn commits the double crime of building to a widower’s tears of joy at the sight of his dead wife’s flowers (which magically spring to life when the towers crumble, letting in the sunlight), as well as having the widower be played by Ernest Borgnine.

Such solipsism won’t do, and while these examples may be reflective of a human impulse that many were feeling—namely, to retreat—they seem woefully insubstantial. (To be fair, most of the segments were rushed into production only months after the attacks.) Incoherence is to be expected, but the tame disengagement is off-putting, careering between Alejandro González Iñárritu’s impressionistic soundscape of noisy shrieks punctuated by snuff shots of people jumping out of the towers, to Mira Nair’s ho-hum gloss on a true-life missing person story, which sets up potent racist allegations only to debunk them in a triumphant press conference. (Ah, the movies.)

The bookends hold greater interest if not water. Samira Makhmalbaf, the youngest participating filmmaker at 23, paradoxically offers the most mature segment, with scrappy Afghan kids unable to grasp the enormity of their teacher’s news. Shohei Imamura, the septuagenarian Japanese master, provides the most irreverent, ending with a hissing cobra spitting the words, “There is no such thing as a holy war.” (His film is about a shell-shocked veteran who thinks he’s a snake.) But you begin to long for tougher images of resiliency and defiance; the omission of a New York filmmaker is a shame. Reportedly, a segment proposed by aging NYC badboy Abel Ferrara was rejected, though one wonders how awful it could have been, given what made the cut.

Only Ken Loach, the British socialist, earns his keep with a diaristic entry that approaches the sad power of a Chris Marker cine-essay. As narrated by a Chilean exile, his film deals with another September 11, the one from 30 years ago—also a violent division between old and new worlds, also an act of foreign-sponsored aggression. For a moment, the picture coheres in Loach’s scratchy montage, images of bruised solidarity from the uncertain days after Pinochet’s U.S.-sponsored coup, days that ended up being decades, and you get a whiff of what a more courageous 11’09”01 might have been like. But until a worthier batch of artists rises to the occasion, one can only keep on doubting, keep on hoping.