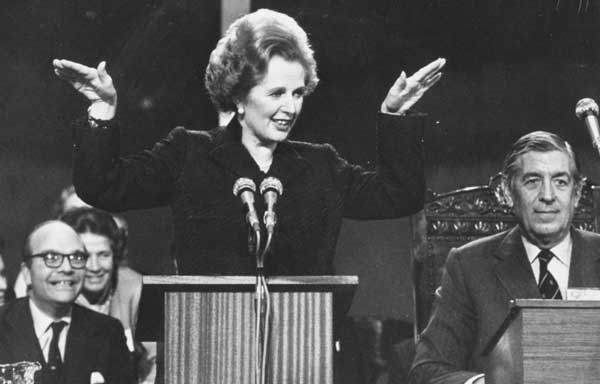 Margaret Thatcher declared there was no such thing as “society,” and some Conservatives winced.

The State of the Welfare State

The welfare state has been unraveling for years in the UK, and the unraveling is speeding up alarmingly at the moment.

In July of 1956, my new young husband and I, with two Scottish folksinger friends, were driving south after a year at a New England university. We stopped for gas in Alabama and asked the attendant, foolishly no doubt, where we’d find the singers we most admired in New Orleans: Leadbelly and others. “Oh, we got welfare for that,” he grunted. Bemused, we went on our way. As recent beneficiaries of the new British “welfare state,” we were in favor of “welfare.” All four of us, if differently, had received free university education. Three of us had done two years of National Service, and I would have my first baby a year later on the National Health. Ten years after the end of World War II, we were sure some progress was being made toward greater equality, even some leveling of class difference and division. As it happens, we all came from backgrounds that represented pretty well the whole spectrum of class differences in the United Kingdom of the day.

I tell this story to illustrate a divergence in the histories of the United States and the UK when it comes to thoughts about equality and the different meanings of “welfare.” The word still holds both of its historical meanings: well-being and charity. I have lived most of my adult life believing that it was the state’s business to look after the basic well-being–health, education, pensions and so on–of all its citizens; and that charitable activity and giving should be directed primarily toward the poor in the rest of the world.

But the welfare state has been unraveling for years in the UK, and the unraveling is speeding up alarmingly at the moment. At last the Right has a justification for reducing the welfare state to the point of destruction. Cutting public services, we are told, is now essential and virtuous, in order to reduce the “deficit” caused by the extravagance and laissez-faire of the last government. In their place, we are offered something called the “Big Society.” No one I know or have read has been able to tell me what this means. When Margaret Thatcher famously declared that there was no such thing as “society” in the 1980s, there were some Conservatives who winced. So perhaps this is an attempt by her descendants to retrieve the word for themselves, while inflating it. The “Big Society” seems to entail two kinds of change: the willingness of the private sector to step into the gap left by truncated public services and even to find ways to make a profit from them; and a belief that unemployment and poverty will mysteriously be mitigated by some people’s willingness to work for nothing, and by a whole slew of charitable activities performed by self-selected and supposedly benevolent vigilantes.

The New Labour governments of Blair and Brown persisted with Thatcher’s privatizing of the railways and the principal utilities and with undermining the unions. They also introduced university fees and private investment into the building and running of schools and hospitals.

The 1950s can look forlorn from here: food and clothes barely out of rationing, bomb sites in London just starting to be cleared so that new buildings might go up. But things were getting better, opening up. The 60th anniversary of the 1951 Festival of Britain is being celebrated this year. I remember it for its enthusiasm and its shabbiness. When I left university four years later I was warned that it would be hard to find work. But suddenly fortune’s wheel turned, and we expected to get jobs, earn money, find places to live, though we knew we might not escape the shabbiness.

Five of my six grandchildren are taking important exams this summer; the oldest is finishing university, the others are teenagers. What will their futures be? It is hard to be encouraging. The cost of university education as well as fierce competition for admission make university a less obvious option than it was for me. And when it comes to jobs, professions and work, they hear only of internships and apprenticeships–and these as only accessible through networking and knowing people. They have to contemplate years of expensive study followed by years of unpaid work. The UK no longer feels like a country for most young men and women, and it’s an uglier place for that.