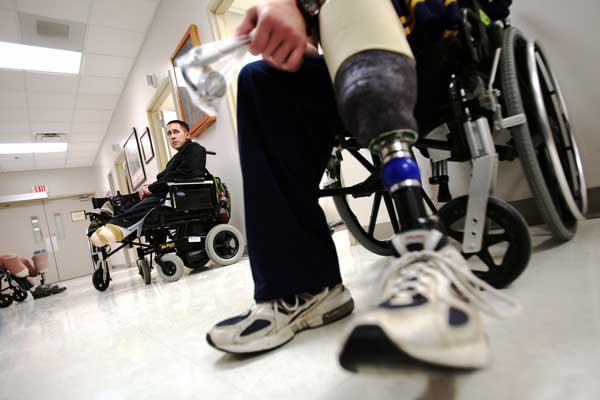 Limbless Iraq vets wait with other amputees in the “fitting clinic” at Walter Reed Hospital in Washington D.C. (Photo by: Jim Watson/AFP/Getty Images)

The human costs of the wars in Iraq and Afghanistan are high–and hidden, due to advances in combat medicine, and this masks the ferocity of these conflicts. In Broken Bodies, Shattered Minds: A Medical Odyssey from Vietnam to Afghanistan (History Publishing, June), Ronald Glasser quotes one army nurse in Baghdad: “We’re saving the really severely injured, legs gone, blinded, deaf, parts of brains destroyed. You may go home, but you won’t be the same as when you left.” As Glasser writes, “Those that the nurse talks about now number in the tens of thousands.”

So the wars’ overt cost, the death toll, would be much greater if not for new medical developments that enable the “low” fatality statistics to hide the brutality of these struggles. The wars’ signature wounds are traumatic brain injury and multiple amputations, which occur because our soldiers are being blown up by IEDs. Such wounds would once have been fatal, but not anymore, thanks to surgical advances and the transformation of combat medicine. “We have been lulled by our own successes in simply keeping our troops alive–as if death is the only measure of risks on the battlefield,” Glasser writes. “Despite the growing sophistication of our battlefield medicine and the new body armor, the orthopedic wards at Walter Reed are becoming filled with numbers of amputees not seen since the Civil War.”

In Vietnam, “small arm and automatic weapon rounds were…the signature wounds,” Glasser writes, “the wounded bled to death. … Brain injuries … in Vietnam were universally fatal.” Glasser, who served as a doctor there, wrote the bestselling 365 Days (1971) about that conflict.

Medicine’s structure has adapted to modern war and so have its techniques, leading to transcontinental, anonymous care, “with survival being the single goal.” Glasser cites the innovation of transfusing patients with “whole blood” instead of plasma and new ways of quickly clamping blood vessels, so that “despite the severity and grievousness of the new wounds, death rates have not increased.” He describes the military’s latest medical invention, the Forward Surgical Team, 20-person medical units, which travel in six Humvees and whose tents “can be set up in less than 60 minutes,” as well as medical teleconferencing, in which “the focus is only on the injuries and not the patient. There is no time for ethics or moral decisions here.”

As with Vietnam veterans, soldiers also suffer from Post-Traumatic Stress Disorder (PTSD). Glasser writes that the military is loathe to discuss it, but PTSD results in “more deaths in deployed military personnel from suicide than from combat.”

He argues that “unlike all our other wars, the real legacy of Iraq and Afghanistan is no longer the graveyard, but the orthopedics ward, the neurological unit, and the psychiatric out-patient department.” So with fewer deaths, and during the last administration, as Glasser notes, a shameful policy of concealing military coffins from the media, Americans have been lulled into ignoring the carnage. (He also argues that the lower number of medals handed out for bravery in Iraq and Afghanistan falsely suggests that fighting is now less grisly.)

Why has the tragedy of numerous amputees and veterans with severe brain injuries not captured public attention? Glasser quotes military expert Andrew Bacevich. “Americans notice foreign policy only in the depths of a disaster too colossal to ignore,” says Bacevich. “[There is] an evisceration of civic culture that results when a small Praetorian Guard shoulders the burden of waging perpetual war, while the majority of citizens purport to revere its members even as they ignore or profit from its service.”