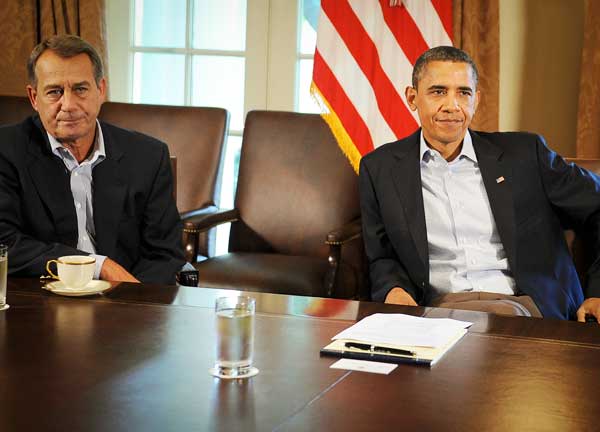 The U.S. government is not a household that must live within its means.

Boehner started by asserting that “the spending binge going on in Washington is a big part of the reason why” millions are unemployed. In fact, a giant housing bubble burst, its effects were multiplied by a deregulated (and fraudulent) financial sector, and a deep recession followed. Several studies demonstrate that government spending–whether increases in programs like unemployment compensation or the stimulus package and the bailouts of the banking and auto industries–saved or created jobs. For example, two Dartmouth economists found more job growth in states that received more stimulus money.

There has been no spending binge: Most of the current increase in the deficit does not result from Obama’s or the Democrats’ spending. The Center on Budget and Policy Priorities concludes that five factors account for virtually all of the deficits projected through 2019 (the first two accounting for half the cumulative deficits): Bush tax cuts, the wars in Iraq and Afghanistan, the recession and its aftermath, and the financial bailout and recovery measures, whose effect on deficits is already declining.

Invoking his experience as a plastics salesman, Boehner asks why government doesn’t act like other businesses that “live within their means.” But virtually every business–big or small–borrows money to operate and grow. More obviously, government is not a business. Its “means” depend on its tax revenue, which can be increased to do important things like building roads, educating young people, protecting the environment and helping the needy. The United States takes in relatively little revenue: Its tax share, from 2004-2008, ranked 29th out of 33 OECD developed countries and the lowest at the federal level since 1950.

Center for American Progress economists Michael Ettlinger and Michael Linden noted that if the United States increased its share to that of 22nd-place Canada, the deficits would be eliminated. Taxes on investments, on corporations and on large estates are lower than any time in more than 65 years, while tax loopholes mainly benefiting the rich have nearly doubled to more than $1 trillion–even though the top 2 percent have captured almost all new income since 2000. That’s where government could find the “means” within which to live: As Ettlinger later testified before a Senate committee, if the income of the rich continues to grow as it has, wealthy Americans could pay the cost of letting the Bush tax cuts expire in January and still be taking home more by the following October.

The federal government’s budget problem is less an issue of spending too much than bringing in too little. The Congressional Budget Office shows that simply not extending the Bush era or other temporary tax cuts would put the budget on a sustainable path over 25 years. But Republicans like Boehner aren’t really concerned about deficits: Virtually all of them supported Rep. Paul Ryan’s “Path to Prosperity” budget, proposed this spring, which would have added $5.4 trillion over the next decade. They want to destroy as much of the government as possible, which is why they seek artificial caps on spending. And that is why it’s doubly disappointing to hear Obama repeat Republican disinformation, like using household analogies for the government’s budget. It’s better to tell the truth.