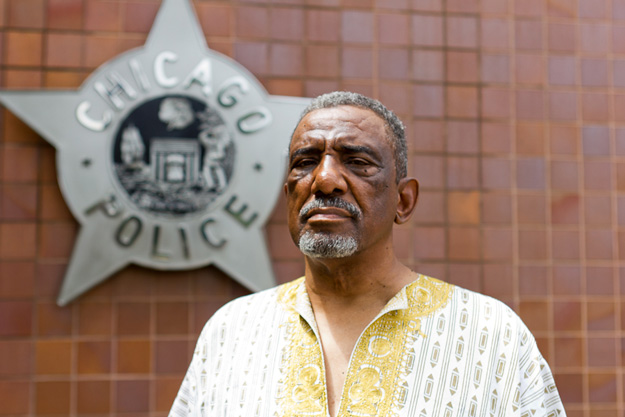 Tales of brutal police officers have been common in Chicago's black neighborhoods for more than a century.

This story continues "The Other Chicago," an In These Times series investigating the lives of African-American youth who have borne the brunt of the Great Recession. The five-part series documents the struggles of young African-American men, whose rate of unemployment dwarfs that of their white counterparts. In de-industrializing Chicago, a highly segregated city that is one-third black, their plight is particularly acute. Other stories in the series include:

Just a few hours apart on July 25, Chicago police officers shot and critically wounded 21-year-old Joe Banks Jr. and 13-year-old Jimmell Cannon. Witnesses at the scenes say the victims were unarmed, while police claim they both wielded guns. (Cannon, who was shot six times, is said to have had a BB gun.) This blanket justification is often absurd on its face: How many fleeing suspects are likely to stop, turn around and point a gun at well-armed cops?

Despite the implausibility of this story, the Chicago Police Department has invoked it repeatedly this year. As of August 30, Chicago police have shot 45 people, killing 16 – 3 more than the total number shot to death in all of 2010. Eighty-seven percent of those shot by police (as of June 30) were black, according to the Independent Police Review Authority, in a city that is 36 percent African-American. No police officer has been charged with criminal wrongdoing in any of these cases, and many in the black community are furious.

“If I have my hands in my pockets when police stop me – and they stop me all the time – I freeze until they take my hands out of my pockets,” says Jermaine Pearson, a 26-year-old resident of Chicago’s Grand Boulevard neighborhood. “I don’t move ‘cause I knew a dude who took his hands out of his pocket when he got stopped and police shot him.”

Pearson was one of five young African-American men I talked to about their relationship to the CPD. All five had contempt for the police, even though two had relatives in the department. “I see the police as a bunch of folks who are trained to abuse us,” said Anthony White, 24. “All they do is harass you.”

Black youth continue to be arrested at astronomical rates. In 2010, Chicago police arrested 20,930 black youth 17 or younger, while arresting 936 Caucasian youth. The ratio of black to white arrests for marijuana possession was 15 to 1, The Chicago Reader reports. And, a study by the Disproportionate Justice Impact Study Commission found that an African American convicted of a low-level drug crime in Cook County is eight times more likely than his white counterpart to go to prison.

The CPD frequently cites gangs as a core factor driving street violence, but the men I spoke to challenge that theory. “Gangbanging in Chicago is dead and it’s bogus for the police to keep pushing that issue,” said Derrick Wheatley, 25. All five men agreed that the customary notion of a gang as a hierarchical group is anachronistic.

“Gang chiefs have no power whatsoever to stop anything on today’s streets,” said Lance Williams, associate director of Jacob H. Carruthers Center for Inner City Studies at Northeastern Illinois University. “Most of this violence is interpersonal and fueled by distressed economic conditions–the same effects of poverty you’d find all over the world.”

Tales of brutal police officers have been common in Chicago’s black neighborhoods for more than a century. From July 1919’s “Red Summer” riot, when black Chicagoans met with the police chief over racist patterns of police misconduct, to Chicago police Lt. Jon Burge’s reign of terror from 1972 to 1991, when he and his torture corps victimized more than 100 black men, relations between black citizens and the CPD have never been cordial.

Now, as the Great Recession wreaks disproportionate damage on African Americans, further curtailing their options for economic success, relations between the two are facing new pressures. Labor department statistics show that Chicago has the highest black unemployment rate (21.4 percent) of large U.S. cities. In the city’s most distressed African-American communities, the rate is considerably higher.

Although violent crime rates have decreased in Chicago during the last decade, relations between police and the black community show little change.

Patricia Hill is acutely aware of the problem. A 21-year-veteran of the CPD who is now retired, she’s the executive director of the African-American Police League (AAPL). One major purpose of her group, founded in 1968, is for the city to recruit black cops who have a close relationship to the black community.

Hill is troubled that the black cops being hired seem to lack a sense of connection to the black community. But she is also concerned that the department has been lax in its commitment to hire black cops. “We are about 24 percent of the police department now, but our numbers are going down. And I see no effort to stop the decline.”

Harold Saffold, 70, a sage observer of the relationship between the black community and the CPD, spent 26 years on the force during two of its most tumultuous periods: the turmoil of the Black Panther era, when two of its members were gunned down by police, and again during the contentious days of Harold Washington, who was elected the city’s first black mayor in 1983. As the appointed head of Mayor Washington’s security detail, he witnessed firsthand the police department’s animosity. “I saw just how deeply racism was embedded in the CPD. I see little evidence that much has changed since then.”

He is now president and CEO of The Positive Anti-Crime Thrust, an organization designed to promote police and community cooperation. Convinced that the paradigm of paramilitary policing long favored by the CPD (and responsible for the slayings of Black Panther leaders Fred Hampton and Mark Clark) is counterproductive, Saffold has no doubt that more community focus is the key to more effective policing. But he is “ambivalent” about Mayor Rahm Emanuel’s proposed community-oriented strategy.

Emanuel, intent on salvaging the spirit of the Chicago Alternative Policing Strategy (CAPS) program – a police/community cooperation that started in 1993 but has been waning in recent years – is trying to shift away from the paramilitary-styled strategy with new initiatives: redeploying 750 cops onto the streets (and promising 250 additional new hires), creating a novel community-based program called “A Force For Good” and revitalizing the position of Ronald Holt, the popular CAPS director whose son was a fatal victim of street violence in 2007.

“Reassigning officers to beats where they get to know the communities is a good thing, if they come in with the right attitude,” Saffold says. “But if they come in indignant because they were reassigned from more favorable posts, then it will just compound the problem.”

The real challenge, he thinks, is officers who are much more comfortable with a hard-line, gun-focused approach – an attitude, he says, that was forged during a period of overt racial antagonism. “Many police officers feel they are making some kind of weak concession if they show too much respect to the black community.”

Young people in Bronzeville, a neighborhood on the city’s South Side, concur. “The police are like the monsters I used to dream about,” Pearson said. “They can do whatever they want to you, but you can’t do anything to them.”

“I know that sometimes the police try to do the best they can,” says Courtney Scott, a teenage volunteer for Chicago Defender Charities, the group that puts on the Bud Billiken Parade, the nation’s oldest and largest African-American parade. “But that’s usually not good enough. They seldom come fast enough when you call, but then when they do come, they tend to aggravate the problem rather than solve it.”

A 2007 University of Chicago study, titled “The Chicago Police Department’s Broken System,” makes clear the reason for the enduring divide between the CPD and Black Chicago. The report revealed evidence of systemic abuse, which included brutality, illegal searches, false arrests and what the report’s authors termed “apartheid justice.”

Craig Futterman, the lead author of the report, says, “We found that the odds were about two in a thousand that a Chicago cop would receive any meaningful discipline for abusing a civilian. And that lack of accountability tainted the entire CPD.”

Some believe that CPD’s new police superintendent Garry McCarthy – the former police director of Newark, N.J. and a veteran of the NYPD – will be a force for reform. In the months following his appointment by Emanuel in May, he spoke about decriminalizing marijuana arrests and focusing on improving relations with the black community. In a recent interview on WBEZ, Chicago’s NPR affiliate, McCarthy acknowledged the history of police promoting racist policies, saying, “[R]ecognition is the first step toward finding a cure towards what is ailing us.”

Those are powerful words. But the AAPL’s Hill cautions that McCarthy’s critics in Newark said he knew all the right words but did very little to actually change police culture. Futterman also predicts little change. “The primary problem is that being young and black in a low-income community is still considered probable cause to most white police officers.” Until that changes, he says, little else will.

“The Other Chicago” is supported by the Local Reporting Initiative of Community News Matters, underwritten by The Chicago Community Trust with help from the McCormick, MacArthur, Knight and Driehaus Foundations, and administered by The Community Media Workshop and The Chicago Reporter.