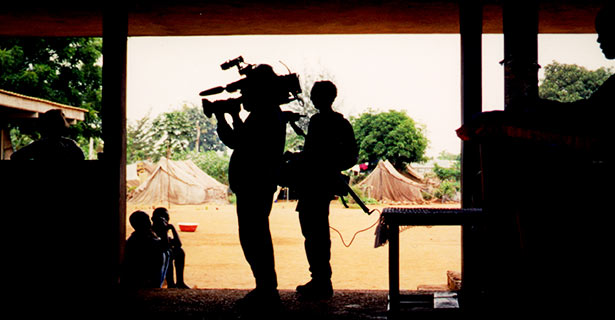 Kartemquin Films marks a milestone–and remains as relevant as ever.

Kartemquin Films has become a center of cultural gravity--a site to encourage social inquiry, to nurture talent and to push for policies that strengthen our democracy.

As he approached the podium on the stage of the funkily charming Metro club in Chicago in mid-September, filmmaker Gordon Quinn pulled out a well-thumbed book. “I want to read you what inspired us to start Kartemquin Films,” he said. “‘Artists have always been the real purveyors of the news, for it is not the outward happening in itself which is new, but the kindling by it of emotion, perception and appreciation.’”

Kartemquin, which Quinn started with two other young idealistic University of Chicago graduates in 1966, has become a legendary source of social-issue documentaries, including Hoop Dreams, The New Americans series on public TV, and, most recently, The Interrupters. (A Good Man, which profiles director/choreographer Bill T. Jones, will air on PBS’ American Masters on November 11.) Since 1966, Kartemquin has made documentary films introducing people to realities they hadn’t imagined and triggering conversations about how to live together in a democracy.

The quote Quinn read at Kartemquin’s 45th anniversary celebration was by the great American pragmatist philosopher John Dewey, who brought us progressive education before it was depoliticized, who worked with Jane Addams at Hull-House and who argued that democracy’s lifeblood is conversation between people who don’t already agree.

It wasn’t the first time I had heard that quote. When I became culture editor at In These Times in 1978, Quinn made a point to drop by the office and argue that our cultural coverage should be informed by Dewey’s perspective. He argued that we should not only cover cultural expression, but take a hard look at the organizations and policies that enable and limit its function in a democracy.

I recently agreed to serve on Kartemquin’s board of directors because I think Kartemquin Films is a remarkable American institution. It has become a center of cultural gravity–a site to encourage social inquiry, to nurture talent and to push for policies that strengthen our democracy. And it’s reaching millions of people in theaters, living rooms, schools and organizing settings.

The company was created just as cinéma vérité burst onto the scene. Inspired by the pioneering work of Richard Leacock, the Mayles brothers and the National Film Board of Canada’s social-documentary work, Quinn and his colleagues wanted to conduct what they called Cinematic Social Inquiry. But they soon found that just making a film wasn’t enough. Dissatisfied with the lukewarm social action provoked by their initial work in the 1960s, they sought out more activist approaches.

In the 1970s, Kartemquin evolved into a collective enterprise marked by the rise of feminism. Women and men coming from groups like working-class organizations Rising Up Angry and Chicago Women’s Liberation Union–many with no film skills–joined. “We taught them film, they taught us organizing,” Quinn says.

At a time when sectarian left politics destroyed many organizations, Kartemquinites stayed anchored to a Deweyan vision of democratic participation. The Chicago Maternity Center Story (1976), directed by Suzanne Davenport (who became a school reform activist) and Jenny Rohrer (who went on to work with labor unions and nonprofit organizations) was the highlight of its era. Medical care was changing from a patient-doctor relationship to a set of individually billable procedures, and a venerable Chicago home birth service was being shut down. The Kartemquin collective followed one of the last birthings of the service, within an economic and political analysis. The film has become a classic, still used by feminist groups, medical organizations and women’s studies programs alike. When a Tallahassee group fighting healthcare corporatization screened the film, the audience spontaneously marched against a local hospital.

With the gradual dissolution of the collective in the 1980s, Quinn and partner Jerry Blumenthal focused on making films about work and labor struggles in Chicago. In Taylor Chain I and Taylor Chain II, they documented a chain factory strike and the collective bargaining process from the inside, with unprecedented permission of both management and labor. (Most of this work, like a lot of Kartemquin’s repertoire, is finding a new audience online and on DVD.)

Kartemquin’s low-key style of nurturing social-issue filmmakers was exemplified with Hoop Dreams. The film follows two African-American Chicago boys from middle school to college as they chase their ultimately fractured dream to become professional basketball players. Directed by Steve James, the film is about American dreams on a collision course with American realities. Seventeen years after its debut, Hoop Dreams is shown to young boys and girls who need to know the odds against riding sports out of racial, economic and political injustice.

Now one of the best-known American documentaries, it was a film that was almost never made. Launched from a modest short, it was enabled only with a minuscule starter grant from the Illinois Arts Council and took seven years to finish. Once Hoop Dreams was finished–a heartland vérité film, a documentary when they weren’t sexy, 170 minutes long and with zero celebrities–it should never have been a success. But it swept the Sundance Film Festival, made a record-breaking deal (in which Kartemquin included the subjects), and won an Oscar nomination (for best editing rather than best documentary, which kicked off a scandal in the entertainment world).

James’ most recent work with Kartemquin, The Interrupters, about violence prevention in Chicago, is also a film festival hit and has won glowing critical reviews.

The gala at Metro was full of testimonials that demonstrated Kartemquin’s unique mentoring and community-building role. With help from a MacArthur Foundation grant to transition beyond the founder generation, it continues to train and nurture the film community while looking at the bigger picture. The nonprofit consistently raises its voice on media policy issues. It is a constant advocate for public funding for the arts and since the 1970s has supported cable access TV as a community voice. In the 1980s, Kartemquin was a major voice in indie-filmmaker demands that resulted in public TV’s Independent Television Service, now offering “a film festival in your living room.” And Kartemquin was a leader in documentarians’ creation of the Documentary Filmmakers’ Statement of Best Practices in Fair Use. (Full disclosure: American University’s Center for Social Media, which I founded, helped create this statement.)

Tim Horsburgh, who directs Kartemquin’s social networking efforts, says that he had to explain Facebook and Twitter to the older folks in the office when he began working there. But once they got it, one of them burst out, “Oh, social networking! That’s what we’ve always done!” Quinn agrees: “We see ourselves as media activists, thinking about the role that media needs to play in a democracy.”