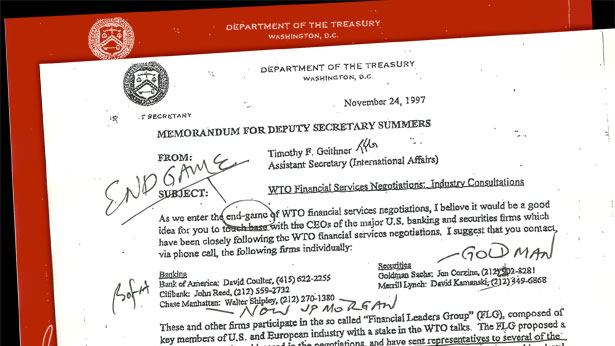 Who’s to blame for the implosion of Greece—and the global economy?

The Friedmans (Thomas, and before him, Milton) are very useful to bankers. They take the spotlight off the perpetrators of the crimes and blame financial ruin on the victims.

On May 5, 2010, I open up the Wall Street Journal and I could puke. There was this photo of a man on fire, just a bunch of flames with a leg sticking out. Two others burnt with him on a pretty spring day in Athens.

The question is, who did it?

If you read the U.S. papers, the answer was obvious. A bunch of olive-spitting, ouzo-guzzling, lazy Greek workers who refused to put in a full day’s work, and retired while they were still teenagers on pensions fit for pasha, had gone on a social services spending spree using borrowed money. Now that the bill came due and the Greeks had to pay with higher taxes and cuts in their big fat welfare state, they ran riot, screaming in the streets, busting windows and burning banks with people inside.

I didn’t buy it. It wasn’t just a feeling in my gut, it was the document in my hand, marked, “RESTRICTED DISTRIBUTION. ITS CONTENTS MAY NOT BE OTHERWISE DISCLOSED. MAY BE USED BY RECEIPIENTS (sic) ONLY IN THE PERFORMANCE OF THEIR OFFICIAL DUTIES.”

Well, it’s my official duty as a journalist to disclose it. The firebombing, the mobs in the streets of Athens, mass unemployment, the empty pension funds and the angry despair that would sweep across Europe in 2010 began with a series of banking transactions crafted in the United States and Switzerland. The plan was 18 years old, and here it was played out in the streets of Greece, then Spain and Portugal, and before that in Latin America and Asia. The riot was written right into it.

When I ask, Who did it? I don’t mean the damaged fool who threw the Molotov cocktail into a crowded bank. I’m looking for the men in the shadows, the very big make-the-monkey-jump men who turned economies into explosive kindling, lit the fuse, then stood first in line at the fire sale.

I have their phone numbers.

The phone numbers came from a memo about a so-called “end-game.” The ominous note (shown above), also marked confidential, was written by Tim Geithner and addressed to Larry Summers. Over time, Summers and Geithner each would take a turn as U.S. Secretary of the Treasury, but in November 1997, they had higher posts, as Masters of the Financial Universe. Unfortunately these notes were just a bunch of paper not worth bothering with unless I could get confirmation they were legit. And that would require an expensive trip to Geneva to meet with World Trade Organization Director-General Pascal Lamy.

Before working for the WTO, Lamy ran Le Crédit Lyonnais, the French megabank. The fit and sparkly Frenchman, comfortable with himself and confident, dressed down for our meeting in a powder blue sweater vest.

I spread my cards and documents on the table, fanned them out like a Texas poker player who’d drawn an inside flush. Across the cover of the thick one on top was a clearly ineffective note:

“Ensure this text is not made publicly available.”

He smiled. Lamy is too smart to ask how I got them, too smart to defend them and excellent at explaining why they don’t actually exist. “The WTO was not created as some dark cabal of multinationals,” the banker insisted. But the meeting notes of this noncabal made for some pretty interesting reading. It took an hour and a half to go over each, especially the one you could call the Magna Carta of Globalization.

You know what the perfect crime is?

It’s the one that’s not illegal.

Sanford “Sandy” Weill must have thought John Dillinger was schmuck.

Weill didn’t bother with a few greenbacks in the bank vault. Weill stole the whole bank. In April 1998, Weill’s company, Travelers Group, an agglomeration of investment banks and other hot financial operations, took over Citicorp. Weill, now running the freshly minted Citigroup, made millions off the deal. The merger was brilliant–and against the law.

While Dillinger, the fool, used fast getaway cars and Tommy guns to avoid the law, Weill simply had the law repealed.

The law was the Glass-Steagall Act, signed by President Roosevelt in 1933. Glass-Steagall prohibited banks that take deposits (“commercial” banks) from merging with “investment” banks. Investment banks, despite the upright name, are financial casinos, which can make high-stakes, high-risk bets on stocks, bonds, currencies, derivatives, weather, whatever.

Glass-Steagall was based on a deal FDR made with banks during the Great Depression: The government would guarantee savings accounts, but the banks could not then use those government-backed deposits to finance loading up a poker table with chips to play a two-pair bluff.

Of course, the world would be a much happier place today, and Greece would not have burned, if Weill and his fellow banksters had simply taken a trillion dollars and blown it on a weekend in Vegas.

I’ve done a quick calc on Weill’s deal that broke the law (I mean, literally shattered it). The stock of the combined Weill companies popped up by $24 billion on the day of the announcement. Nice. The fools and the fleeced were told the combine “created value.” The hell it did. It created a government guarantee for Sandy’s casinos. The American public, in effect, put up insurance valued at $24 billion of Citigroup.

Weill’s bank heist was an inside job. Removing the law that formed the rock-solid foundation of America’s financial structure would require a lot of demolition work by U.S. Secretary of the Treasury Robert Rubin, who recommended that Congress repeal Glass-Steagall and oversaw the Treasury as it helped to relax similar global financial regulations. Bob Rubin’s jackhammer on Glass-Steagall was effective–the law’s demolition was signed on November 12, 1999, just four months after Rubin left Treasury and just two weeks after he joined Sandy Weill to help run Citigroup.

Rubin picked up $126 million in payments from Sandy’s now-legal operation. That was not a payoff. That was compensation. There’s a difference: six letters. Count ‘em.

When Rubin left the Treasury for Citi, he put his protégés Summers and Geithner in charge; Summers to take Rubin’s post, and Geithner sent to Geneva on a very special assignment.

Soon Goldman Sachs et al. were cranking out new derivative “products” faster than bed sheets from a whorehouse laundry. Some gray-hairs worried about the risk. Risk, shmisk. With explicit and implicit government guarantees, the bankers were ready to go double-or-nothing on insecure securities.

Summers, like Rubin before him, body-blocked all attempts to regulate the derivatives market.

So, who lit the fires in Greece?

Luckily, some birdies flew over our office and dropped several papers through the transom. One memo, dated November 24, 1997, was written by Assistant Treasury Secretary for International Affairs Tim Geithner to Deputy Secretary Larry Summers.

But what did Geithner mean by “the end-game” that this list of illustrious money managing CEOs should be consulted on? Let’s piece together how the game began. In 1997, there were two burning questions for Summers, Geithner, Rubin, Weill and the gang.

The first was, “What if shit happens?” What if the decriminalized trade in weird securities goes bad? Where can the United States dump its toxic assets?

Rubin’s deputy secretary, Summers, would apply the same solution he had suggested earlier, in 1991, regarding chemical toxins. Then chief economist of the World Bank, Summers wrote a memo stating that poor nations are “UNDER-polluted” (his own caps), so the West should dump more toxins there. When the memo leaked, Summers said it was a joke. It was certainly a joke, but it was also, under Summers, World Bank policy. Summers would make the rest of the planet swallow toxic financial assets. Let Ireland, Brazil, Portugal and Greece pay cash money to take on the U.S. bankers’ risk.

The second question for the bankers was, “How do we bust down financial rules across the planet?” It was not enough to erase the laws against speculating with bank deposits in the United States if it was still a crime to do so in Brazil, India, Spain and Greece. In most nations, betting government-guaranteed savings accounts on funky securities remained verboten.

What to do? You can’t engineer enough coup d’états and install General Pinochets everywhere. So then, how to change the laws of 152 nations with a single coup? Treasury called a meeting.

From the memos, it appears there were little gatherings of Treasury with the five CEOs mentioned above whom Geithner had urged Summers to consult. How could they make 152 nations bust apart their banking laws and allow purchases of U.S. toxic assets?

The answer was to take a minor trade treaty, the Financial Services Agreement (FSA), and turn it into the new finance law of the planet. In their closed little gatherings, this bankers’ roundtable rewrote the FSA, with protocols forcing every nation to remove restrictions and old-fashioned safe-banking regulations. The rewritten agreement would require every nation to allow trade in new financial products, whether magical or toxic. It would blow apart any nation’s laws restricting foreign bankers.

The agreement, once signed, would trump any attempt by any Congress or Parliament to restore protections. The agreement also dictated that, once demolished, the barriers could not be rebuilt. Return to regulation, called “claw-back,” would be severely punished. Any resisting nation would be put on the economic wheel and broken.

In 1997, Assistant Treasury Secretary Geithner was sent to Geneva, to WTO headquarters, with this new law in his diplomatic bag. He was assigned to inform the ambassadors of all 152 nations, no exceptions allowed, that they would have to sign it. Or else.

Sometimes, people–and nations–have to eat shit. But no one orders it from the menu. The waiter has to hold a gun to your head.

If a country wanted to trade with the United States, it would have to buy the bankers’ financial “products.” It was a brilliant idea. If a nation wanted to sell American goods, they would have to swallow American bads–the derivatives, swaps and all the other exotica coming out of the mad bankers’ laboratories. Furthermore, Citibank, JP Morgan and other banks would be allowed to jump into these nations’ markets and suck out capital at will. Local banks would be deregulated.

Geithner headed off to the WTO in Geneva, and when I was passed a copy, it was still smoking.